Gerardo Del Real: This is Gerardo Del Real with Resource Stock Digest. Joining me today is the CEO of Riley Gold, Mr. Todd Hilditch. Todd, a lot going on. How are you today, sir?

Todd Hilditch: I'm great. Thanks Gerardo. Thanks for calling today.

Gerardo Del Real: No, look, thank you for taking the time. Your geophysics program is underway in Nevada. And I want to talk about that in just a second and let you provide the context, but there is a lot of activity to the right of you, to the left of you, to the North of you, and to the South of you. And I would love for you to provide a bit of context on the flurry of very, very important news, right next to Riley Gold’s Nevada package.

Todd Hilditch: Yeah. It's pretty cool. Mostly because when we started doing our drilling up at Tokop, we were really focusing on the work that had previously been done. So our job was to retest it, make sure that what was showing, was showing. We were able to do that with high grade gold at surface, high grade gold subsurface. We still have additional drill holes to be released. But as you mentioned with geophysics, you really need to add different layers of iterations to better understand. So that's what we're doing at Tokop. What's been really cool though is last week at our property, down in the Battle Mountain-Eureka trend as some would say down in elephant country, Nevada Gold Mines, a joint venture amongst Newmont and Barrick, one of the world's largest entities for production of gold, just joint ventured the project that adjoins us on the North sort of Northwest side, which is with Ridgeline Minerals’ Swift property.

So we now are book ended on the north by Nevada Gold Mines and a JV with Ridgeline as well as to the south in our property boundary, which we also adjoined the Nevada Gold Mines, Cortez, and more closely the Pipeline complex. We are literally 600 meters away from an open pit that Nevada Gold Mines controls. It's got up to three grams per tonne, gold in it. So having one of the world's largest get involved right next to you and now we're sort of sandwiched between their projects is pretty exciting. So we're hopeful that Ridgeline and Nevada Gold mines has a great fall and into next year. It's a 20 million earn in with the ability to spend more, to earn more from the original 60%. Chad has done a really amazing job as CEO of Ridgeline to attract Nevada Gold Mines. So you're right. It's pretty exciting time. And I wish them both luck. 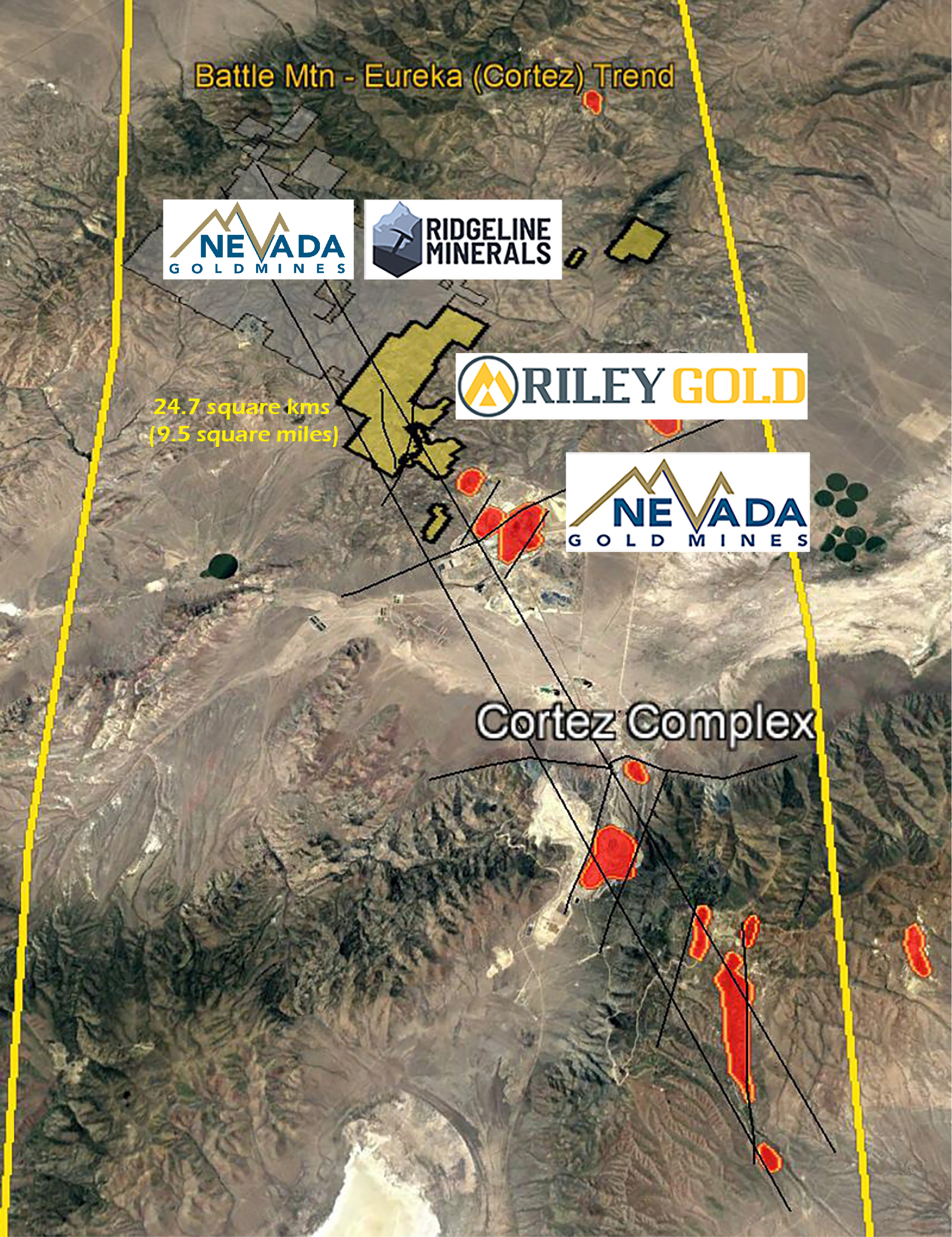 Gerardo Del Real: Listen, you just raised, and what would ended up being an oversubscribed private placement. You clearly had interest prior to this. I got to believe your phone is ringing a whole lot more post Labor Day with the announcement of this joint venture here.

Todd Hilditch: Yeah. It's pretty interesting. I mean the junior exploration gold space, it hasn't exactly been on fire of late, but with what's going on next to us, it's yeah, it's pretty cool. And it doesn't take much to connect dots. I mean, I think you and I have spoken in the past, in our industry, there's a couple of sayings, the trend is your friend. Well, people say that because in Nevada, particularly, and other areas of the world, you get these geological events along structures, et cetera, that end up being a trend or a string of pearls of deposits. And that leads to the other thing that our industry is attuned to is you want to find a gold deposit, look for where another one is.

So being in this Eureka or Battle Mountain-Eureka trend with the Cortez complex of Nevada Gold Mines next to us, it's how can somebody not be excited? They've got 50 million ounce of past production and reserve. So for us to be in line on trend, right near where other deposits are. Yeah, my phone's been ringing from a whole host of different folks, whether they be bigger mining companies that are looking at it saying, oh, that's interesting. Or just investors saying, well, hang on a minute. You're kind of in the way, aren't you, regardless of how many ounces of gold you are able to find in your program. So yeah, it's been nice. It's been a good shot in the arm.

Gerardo Del Real: It's what the better management teams do during tougher markets is you get out there and you add value in a multitude of ways, right? You're doing it with the geophysics. You obviously positioned yourself very strategically. Timing was great on that front. Walk me through what happens in Q4. I'm actually rather bullish on the gold price. By the end of Q4, I think we're going to get on a good run. I like the shake out here that's happening, but walk me through what's next for Riley Gold.

Todd Hilditch: Yeah. So we'll have, well, we should have a host of news releases in the fall here. Everything from continued drill results out at Tokop, additional mapping, additional sampling, geophysics, which is that additional layer or iteration of information, we would need to put a drill program together next year, not in Q4, but next year, based on all of the information put together. And then we are also heading down to the project next week, down in the Cortez area, the Pipeline West Clipper Project, which we were just talking about. And the goal is to add an additional one to two geophysics programs there to help define some of the structure as well as drill targeting for what we would envision a drill program also in 2022, sort of midway through the year. So yeah, lots going on in Q4 to get ready for Q5, 2022.

Gerardo Del Real: Doesn't take a lot to move that. You know as well as I do that you make your money buying low and selling high. I got to believe we're pretty darn close to the buy low part of that equation right now.

Todd Hilditch: Well, with our structure and as you know, as the market and if you're right and many others that believe we're kind of pushing back into that gold space. We've been very particular about a structure. We only have 32 million shares out if you will, and we're trading in the mid 30s. So that can change really quickly with some good news. So we'll keep pounding away.

Todd Hilditch: You bet. Have a great day.

Gerardo Del Real: You as well.