Azincourt Energy is on the cusp of completing its 70% earn-in on the East Preston property.

Uranium, which has been in a bear market for most of the last decade, has been making a recovery, increasing about 32% since the beginning of the year. Against this backdrop, uranium explorer Azincourt Energy Corp. (AAZ:TSX.V; AZURF:OTC) has been progressing with exploration at the East Preston Project, where it is close to completing the requirements to earn a 70% interest in the project with joint venture partners Skyharbour Resources Ltd. (SYH:TSX.V; SYHBF:OTCQB) and Dixie Gold Inc. (DG:TSX.V; YWRLF:OTCMKTS).

East Preston is located in the western part of the Athabasca Basin, one of the world's highest-grade uranium regions, and counts among its neighbors NexGen Energy's Arrow deposit, Fission Uranium's Triple R deposit and AREVA-Cameco-Purepoint's joint venture, Spitfire. 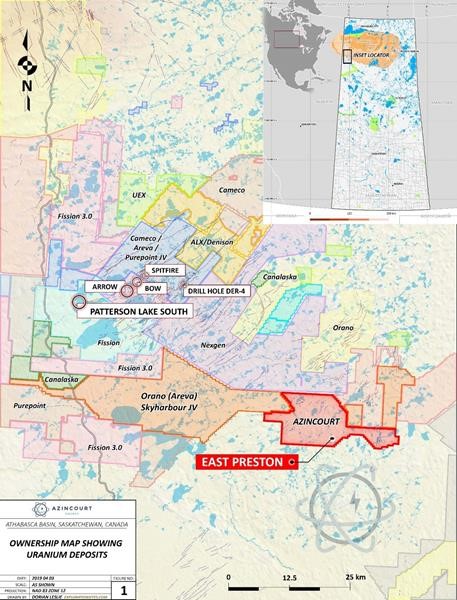 Drilling at East Preston takes place over the winter because it's much easier to punch holes into the swampy terrain when it's frozen, and the company recently announced results from this past winter's 2,431-meter, nine-hole drill program. While the project totals more than 25,000 hectares, the drilling tested three areas in a 7 km by 2 km portion.

"We are very encouraged with the results from the 2020 winter drill program at East Preston," said Ted O'Connor, Azincourt director and technical advisor for East Preston. "We continue to see the right basement unconformity uranium setting—rocks, structure and alteration—from drilling on the project." O'Connor has more than 27 years of experience in the uranium-lithium industry, including 20 years with Cameco Corp., focused on acquisitions, new projects and strategic alliances.

O'Connor discussed the East Preston project's geology. "The helicopter surveys that we did, followed up by ground geophysical surveys, got us into these long linear corridors of conductive rocks and that's a first order criteria. Then we look at what else is going on over those corridors. Are there breaks in them that suggest it could be structural disruption or fault zones? We have no sandstone cover on this project because it's right at the southern edge of the Athabasca Basin. We have uncovered this rare earth element enrichment that could be related to uranium mineralizing processes right in those conductive fault zones, and they're all faults that have been reactivated at what we think is the right timing for uranium mineralization" O'Connor told Streetwise Reports.

"Drilling continues to show us we are on the right track at East Preston," said Azincourt President and CEO Alex Klenman. The presence of rare earth element mineralization, potentially similar to Denison Mines' Wheeler River uranium project, adds to the growing prospectivity of the project. This data is a positive development that demonstrates East Preston continues to reveal it has the necessary environment for uranium deposition."

"My interpretation of this rare earth element mineralization is that this could be a basement expression of REE mineralization similar to that observed in sandstone-hosted systems associated with unconformity uranium deposits on the Wheeler River project—but we're in the basement rocks below the Athabasca sandstone," O'Connor explained.

O'Connor delved into the geology of the area. "We have essentially two end members of the uranium deposits in the Athabasca Basin and variations in between. If you look at the uranium deposits that are in the sandstone, at the unconformity—the place where the sandstone and the basement rock meet—or just above the unconformity, they tend to be what we call complex; they're different. They often have cobalt and arsenic and nickel associated with the uranium mineralization."

"The uranium deposits that are in the basement rocks are different, and they are called simple," O'Connor continued. They are mostly uranium only with a few other, but different, elements. And so I'm looking at this rare earth element enrichment in these fault zones within these correct graphitic rocks and structures and my interpretation is it's a basement analog. It's mineralogically, and elementally chemically different, but it's the same system style."

"We think at the right time, the sandstone was there when the fault zone mineralization was introduced. What makes that significant is at the MAW Zone at Denison's Wheeler River Project on the eastern Athabasca, 5 kilometers from the Phoenix uranium deposit, in the sandstone there's uranium mineralization all around it associated to the same conductive trends, just with slightly different fluid chemistries at the mineralizing time. The MAW Zone being surrounded by multiple uranium mineralized zones and uranium deposits along strike and along sub-parallel graphitic-structural corridors is similar to the East Preston basement litho-tectonic setting," O'Connor explained."

"I believe it's another piece of the puzzle that says not only do we have the right rocks, but also there's actually been some post-sandstone mineralizing fluid systems going on in the right rocks," he said. "We have the exact same rocks we had in the first year of drilling. And they are the right rocks that are known to host deposits further west in at Fission's Triple R deposit and NextGen's Arrow deposit."

"So the rocks are right, the structures right and we have now we think we have evidence of mineralizing fluid systems," O'Connor explained.

Jordan Trimble, CEO of Skyharbour Resources, noted, "If you look at the discoveries made in the last 20 to 30 years in the Athabasca Basin and the deposits, some of which are now being mined, there's been a paradigm shift, particularly in the last decade or so, with sandstone versus basement hosted deposits; a lot more exploration is being carried out deeper into the basement rock or outside of the Basin margin. That was a big part of the discovery of the entire western side of the Basin with the high-grade boulders for Fission and looking at an area that was overlooked because it was outside or on the margin of the sandstone cover."

"That's what this project is," Trimble continued. It's south of the Basin margin. But there's no reason that you can't have major deposits that are in these basement rocks. As they are finding here at East Preston, if you are finding the right indicator minerals, the right structures, having a reactivation event and older rocks is key; you are finding all the right smoke."

"This is a property that doesn't have hundreds of thousands of meters drilled on it. This is an exploration property," Trimble stressed. "And this was really the first meaningful drill program carried out on the project. There's a little bit of drilling that was done back in 2014–2015, but not a lot. And then this was the first larger program carried out by Azincourt. So the fact that they're finding what they're finding with only a few thousand meters drilled is important, and additional exploration and drilling is going to continue to vector in on what we all believe to be a larger deposit sitting on the project."

Looking ahead, O'Connor said, "Later this summer and into the fall, we are planning to conduct ground gravity and electromagnetic geophysics, in this case, probably a Horizontal Loop Electromagnetic (HLEM) survey. We previously conducted a property-wide helicopter airborne survey that basically got us these corridors. The idea is to go in on the ground, cut some lines, run these geophysical surveys overtop of them to essentially refine these corridors and see if are there one or two conductors side by side and more exactly locate them on the ground."

Azincourt is also looking at gravity geophysics because "minute differences in gravity response over the rocks over the surface can tell you things like where there might be structural disruption, where there might be alteration and it's another layer of information that could tell you if one part of the conductor is better than another," O'Connor explained.