E79 Resources (CSE: ESNR)(OTC: ESVNF) — currently trading around C$0.28 per share — will have the drills turning on a maiden program beginning next week at its 100%-owned Beaufort Gold Project in Victorian Goldfields, Australia.

The Beaufort property boasts a historic resource of some 1.2 million ounces of at-surface alluvial gold. After an extensive soil sampling program, targets are now set for what will be the first-ever attempt to uncover a bedrock source of the alluvial gold system through drilling.

E79 CEO, Rory Quinn — whom you’ll be hearing more from in a moment — commented via press release:

"We have been systematically progressing exploration at Beaufort by undertaking the first extensive residual soil sampling program on the exploration license, incorporating re-interpretations of regional aeromagnetic and ground gravity data, testing various structures and quartz vein types with rock chip sampling, and now drilling to test the source of soil geochemical anomalies. Elevated gold (Au) values, to a high of 90 ppb, are positively correlated with elevated arsenic (As), antimony (Sb) and lead (Pb), a characteristic geochemical signature for bedrock gold mineralization in central Victoria. Reconnaissance and in-fill soil sampling continue along the nearly 20km trend of highly prospective ground that provided the source for much of the 1.2 million ounces of alluvial gold estimated to have been produced from the Beaufort goldfield. Our investigations indicate that gold was derived from local bedrock but, aside from a few small historical producers, the bedrock source of the alluvial gold has never been discovered. We are excited by the wealth of geological information this drilling program will provide on a poorly understood and enigmatic goldfield."

The program follows the completion of Phase-One drilling at the company’s other 100%-owned Victorian Goldfields property — the Myrtleford Gold Project — where visible gold associated with quartz veining in two separate zones has been identified in multiple holes. Assays from that program are due within the next few weeks.

With around C$5 million in the treasury and a market cap below C$16 million, E79 should be an exciting one to watch as results come in on one property and as the drills begin turning on another.

And keep in mind that Victorian Goldfields is home to some of the richest gold deposits in all of Australia, including Kirkland Lake’s Fosterville Mine, which chimes in at an incredible 17.9 grams per tonne and is the largest producer in Victoria at over 400,000 oz/yr. 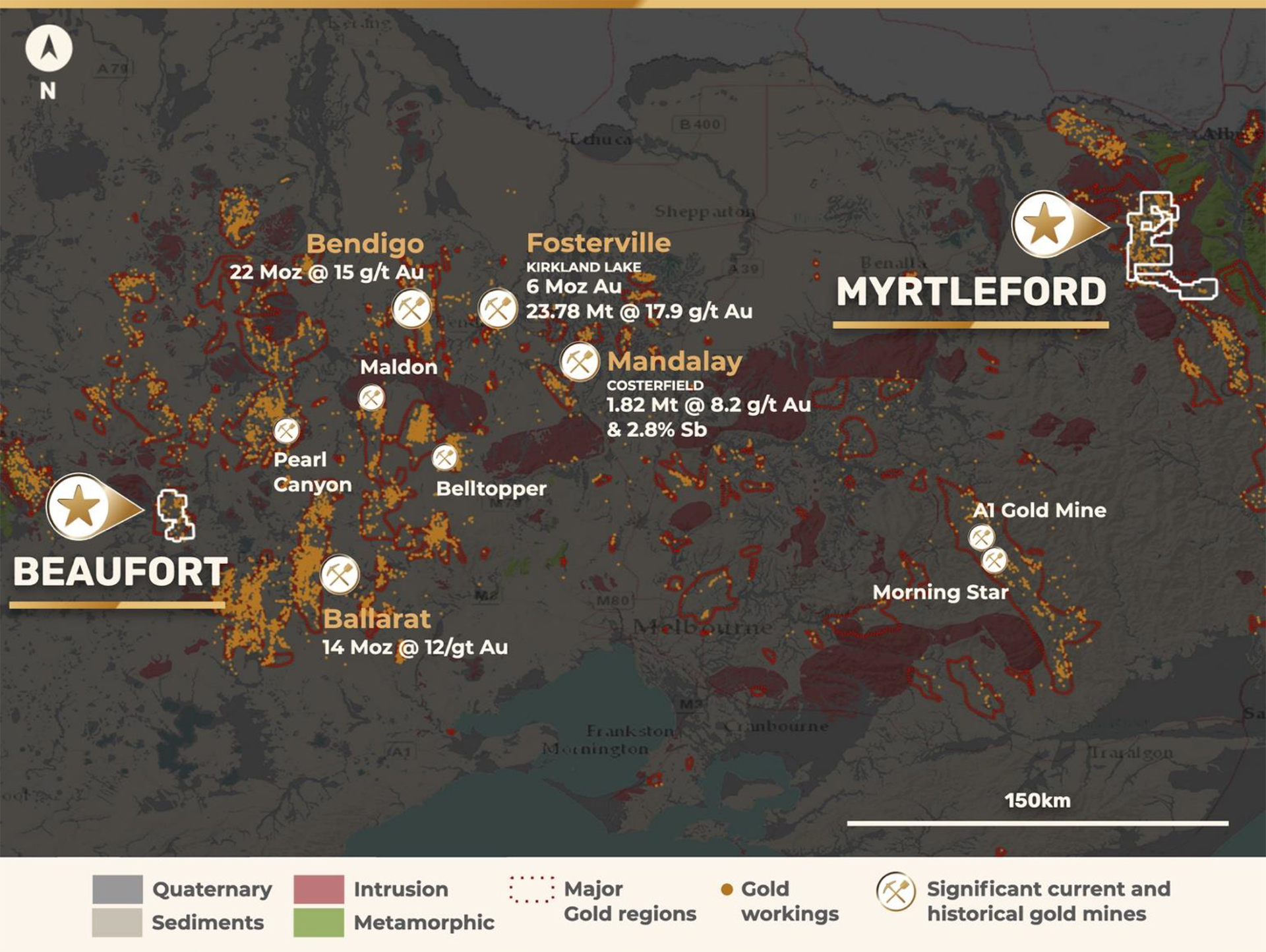 There’s little doubt the gold is there. It’s really a matter of finding the source. The Myrtleford property hosts over 70 historical gold mines with grades often exceeding an ounce per tonne. And Beaufort has that historic alluvial gold haul of some 1.2 million ounces. So the excitement is definitely brewing… and the drills, or so called truth-machine, will soon tell the story.

Our own Gerardo Del Real of Junior Resource Monthly caught up with E79 CEO, Rory Quinn, for a preview of the upcoming maiden drill program at Beaufort. CLICK HERE TO LISTEN. Transcript is also available.

Also be sure to click here for our feature report on E79 Resources.