Argentina Lithium & Energy Corp. (TSX-V: LIT)(OTC: PNXLF) — currently trading around C$0.15 per share — has announced the closing of a non-brokered oversubscribed financing resulting in gross proceeds to the company of C$763,605.

The funds will be used, in part, toward the advancement of its two 100%-owned lithium exploration projects — Incahuasi and Antofalla — along with the potential acquisition of new lithium projects in South America’s prolific Lithium Triangle.

The Lithium Triangle, which includes parts of northwestern Argentina where the company’s two projects are located, produces about half of the world's lithium and hosts approximately 60% of the world’s known lithium reserves. 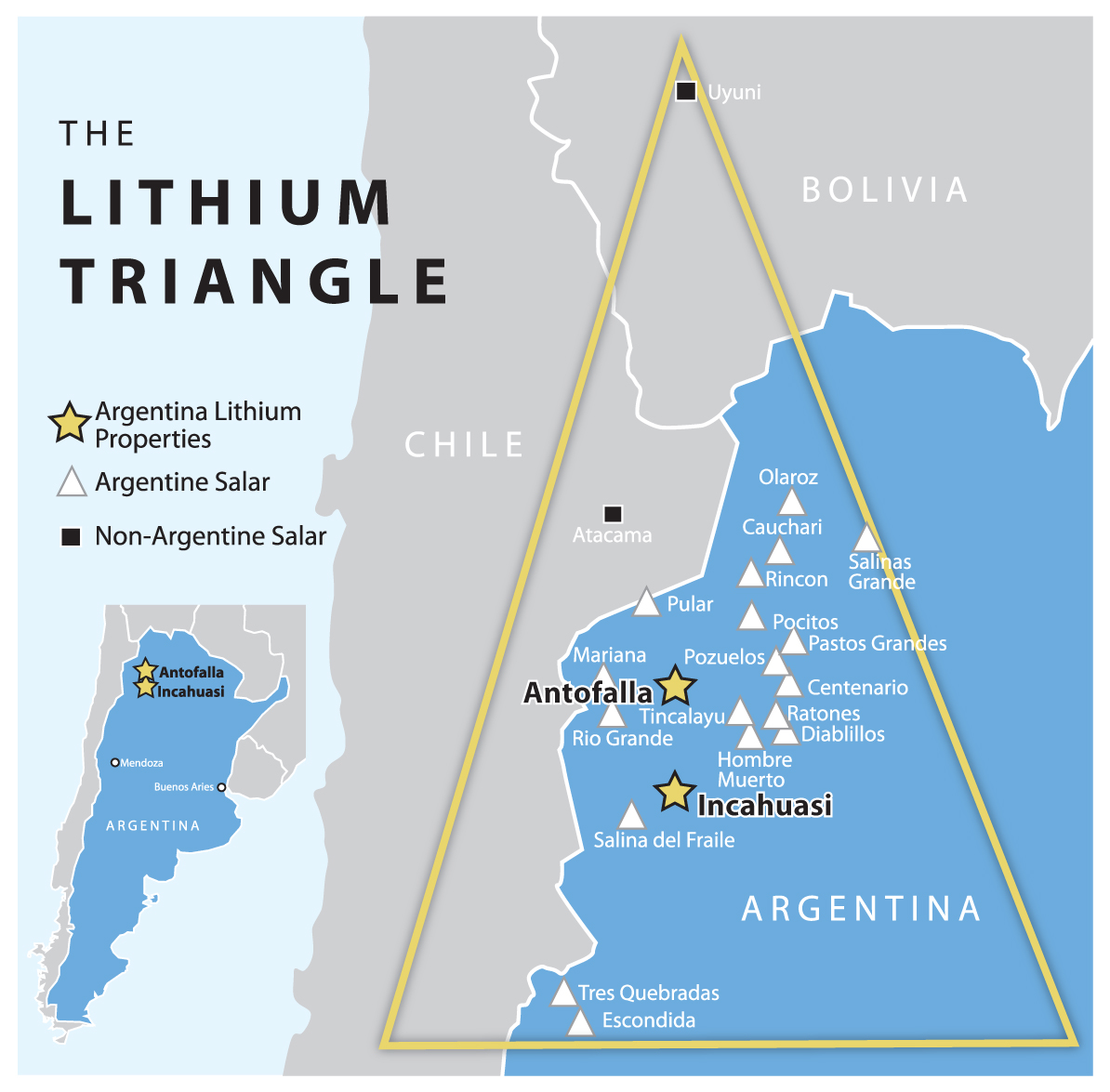 Geologically speaking, lithium production from this part of the world is derived from brines that lie underneath salt flats, which are commonly referred to as salars.

The Lithium Triangle has emerged as the preferred lithium mining region of the world because of its massive salars filled with lithium-rich brines.

The brines are pumped to the surface and transported to large evaporation ponds where the sun and wind work their evaporative magic. 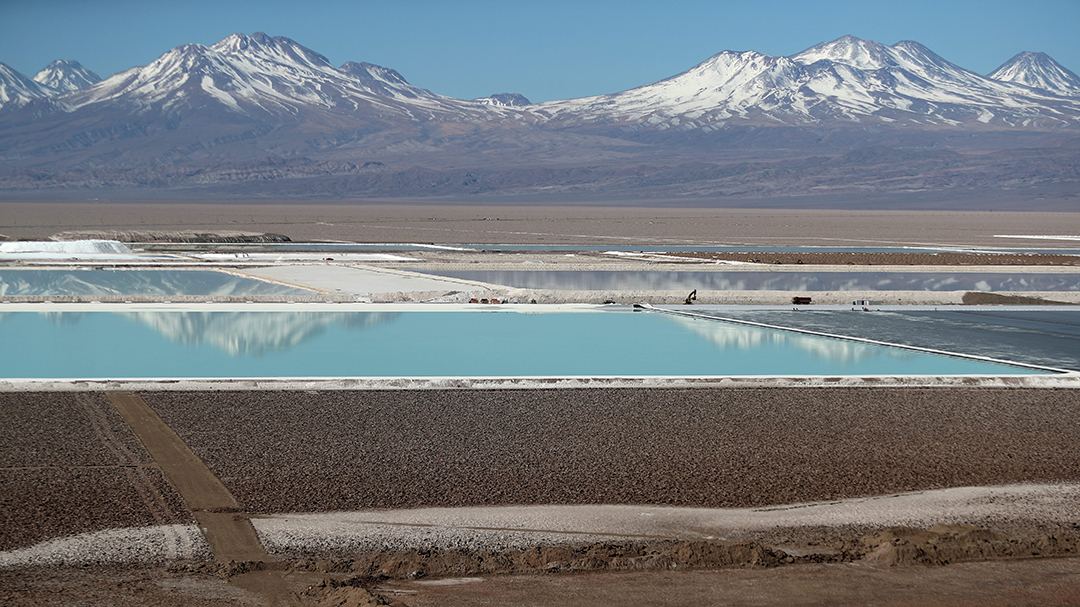 Incahuasi Lithium Project: Argentina Lithium & Energy has acquired a 100%-interest in over 32,800 acres of the Incahuasi Salar and basin in Catamarca province, northwestern Argentina.

The company believes the Incahuasi Salar is underexplored, and, in particular, supports conditions for quality lithium brines at-depth. 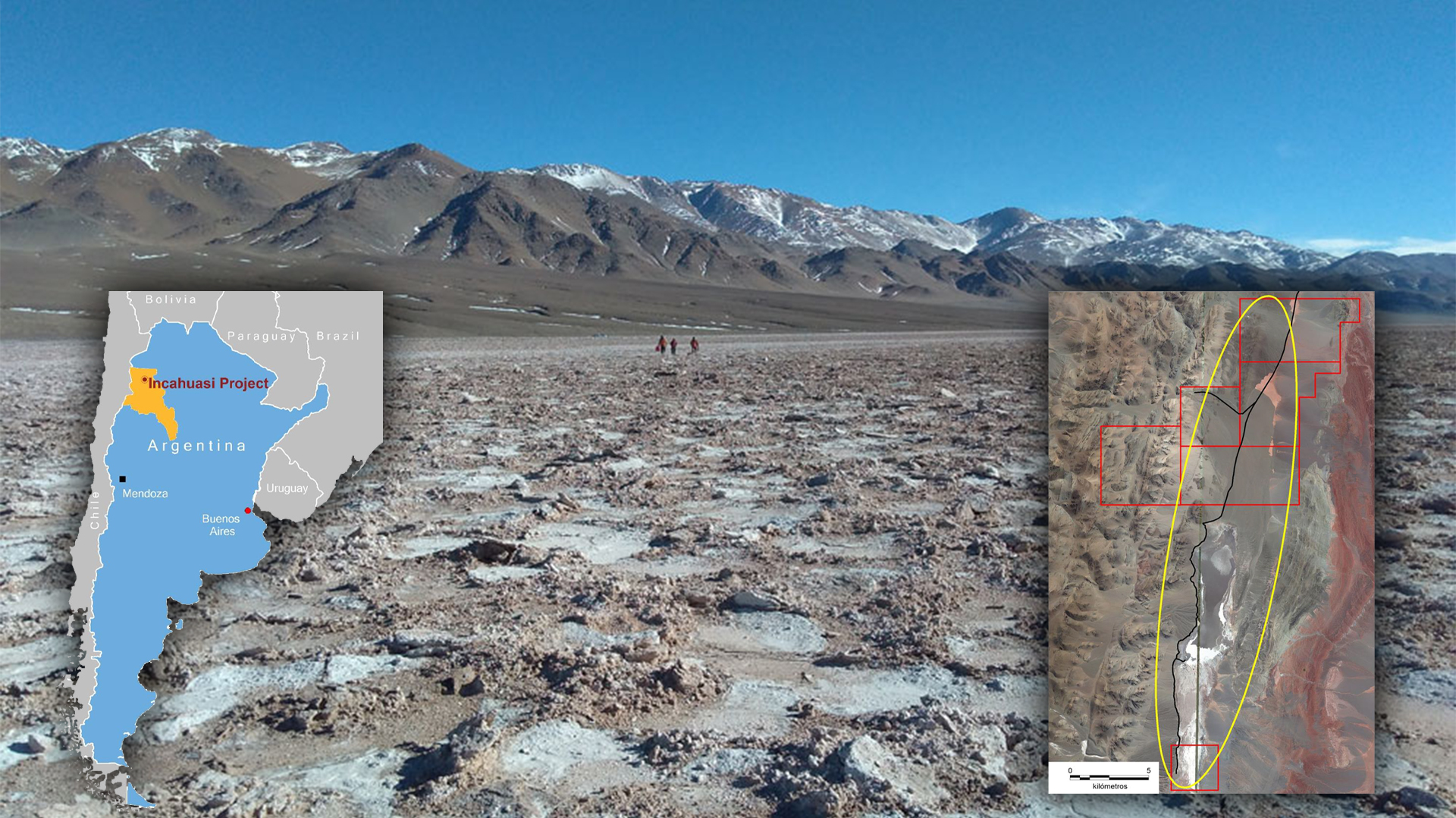 Future work will focus on sampling the northern part of the salar and identifying sub-domains within the salar with higher lithium grades.

Antofalla Lithium Project: Argentina Lithium has acquired a 100%-interest in approximately 22,000 acres of mining claims in the north end of the Salar de Antofalla.

The Salar de Antofalla is approximately 150 km long and 6 km wide and is located at 3,900 meters elevation. 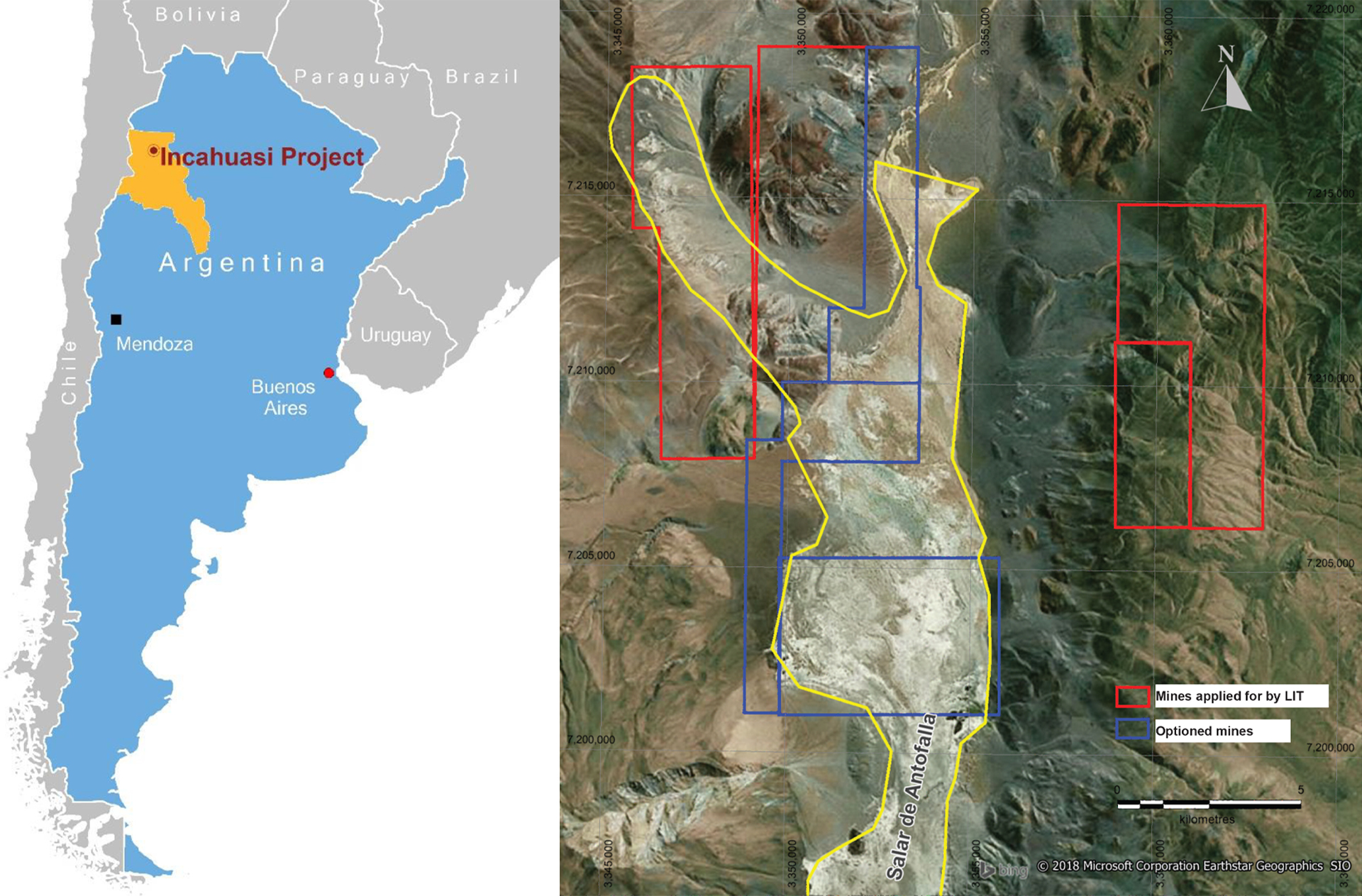 The geological environment at the Salar de Antofalla is similar to other salars in the Puna region where lithium and potash are found. Reported grades from the salar include 350 mg/l lithium and 6,400mg/l potash.

Argentina Lithium has completed a geophysical survey and reconnaissance drilling at the northern part of the Antofalla property.

The survey identified targets with high conductivity in the first 100 metres and moderate conductivity at deeper levels with which to follow up.

Lithium, the so-called “white petroleum,” is the lightest metal on earth. 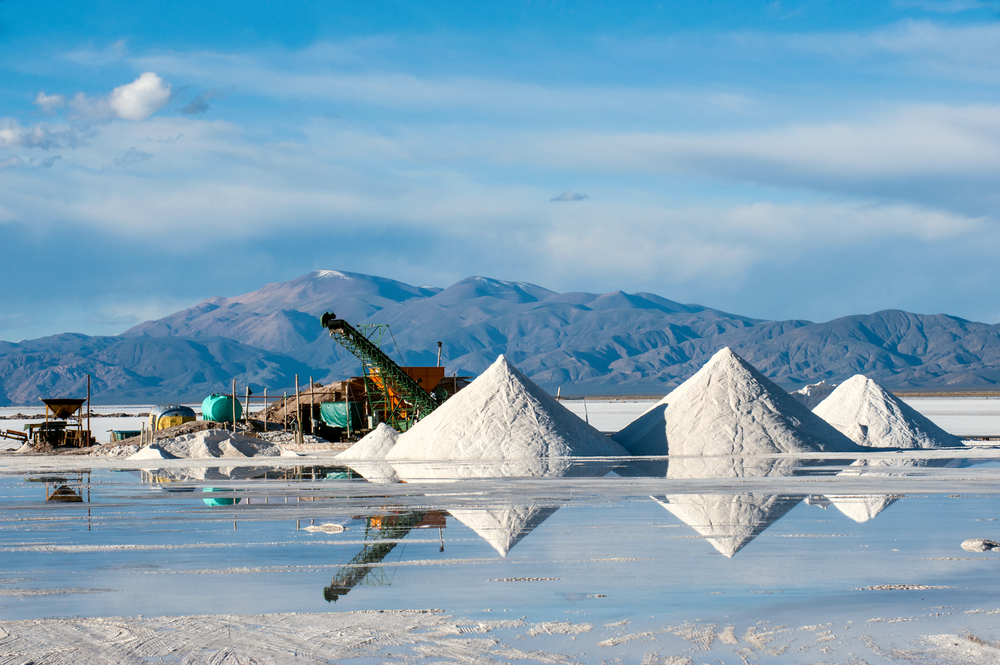 And because of its high energy per unit mass relative to other electrical energy storage systems — the soft, silvery-white alkali metal is ideal for use in car batteries as well as laptops, cell phones, and a host of consumer electronic devices. 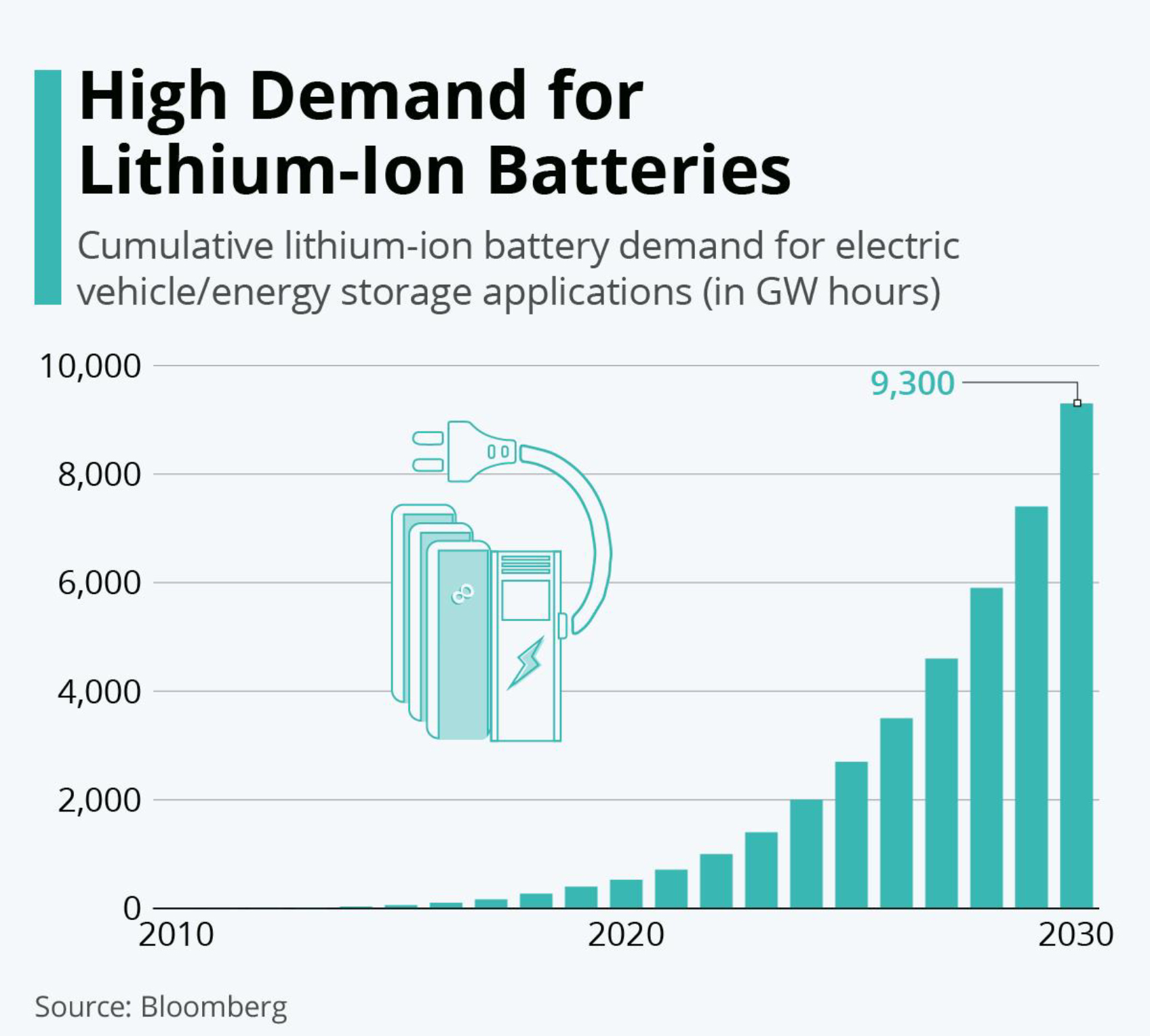 Today’s EV trend is being fueled by $billions in investment by the world’s largest automakers such as Volkswagen, BMW, Toyota, Nissan, Hyundai, GM, Ford, and Fiat-Chrysler.

In fact, commitments to invest in lithium-ion batteries and EVs now totals an astounding US$90 billion globally with 39+ automakers moving into the electric/plug-in hybrid vehicle space.

James Jeary of CRU Group told Investing News Network (INN), “The main surprise in the lithium market this year was on the demand side. EV sales were hugely resilient, particularly in Europe. Even in China, the recovery of sales in H2 after a sluggish H1 has been very strong.”

The global demand for a cleaner, greener future is a goal that Argentina Lithium & Energy believes it can support through the exploration and development of lithium resources in South America’s Lithium Triangle — particularly via its two 100%-owned projects, plus pending lithium property acquisitions, in northwestern Argentina.

Argentina Lithium & Energy is a member of the Grosso Group — a resource management team that has literally pioneered the mineral exploration industry in Argentina with active in-country operations since 1993.

The Grosso Group has made four major metals discoveries in Argentina to-date and has held partnerships with some of the biggest names in the mining sector including Barrick, Teck Cominco, and Rio Tinto.

The group has been following the lithium sector for decades and believes the time is ripe for expanding its efforts in lithium resource development in the highly prospective Argentinean portion of the Lithium Triangle.

And the vehicle the group is putting forth to accomplish that objective is Argentina Lithium & Energy Corp. 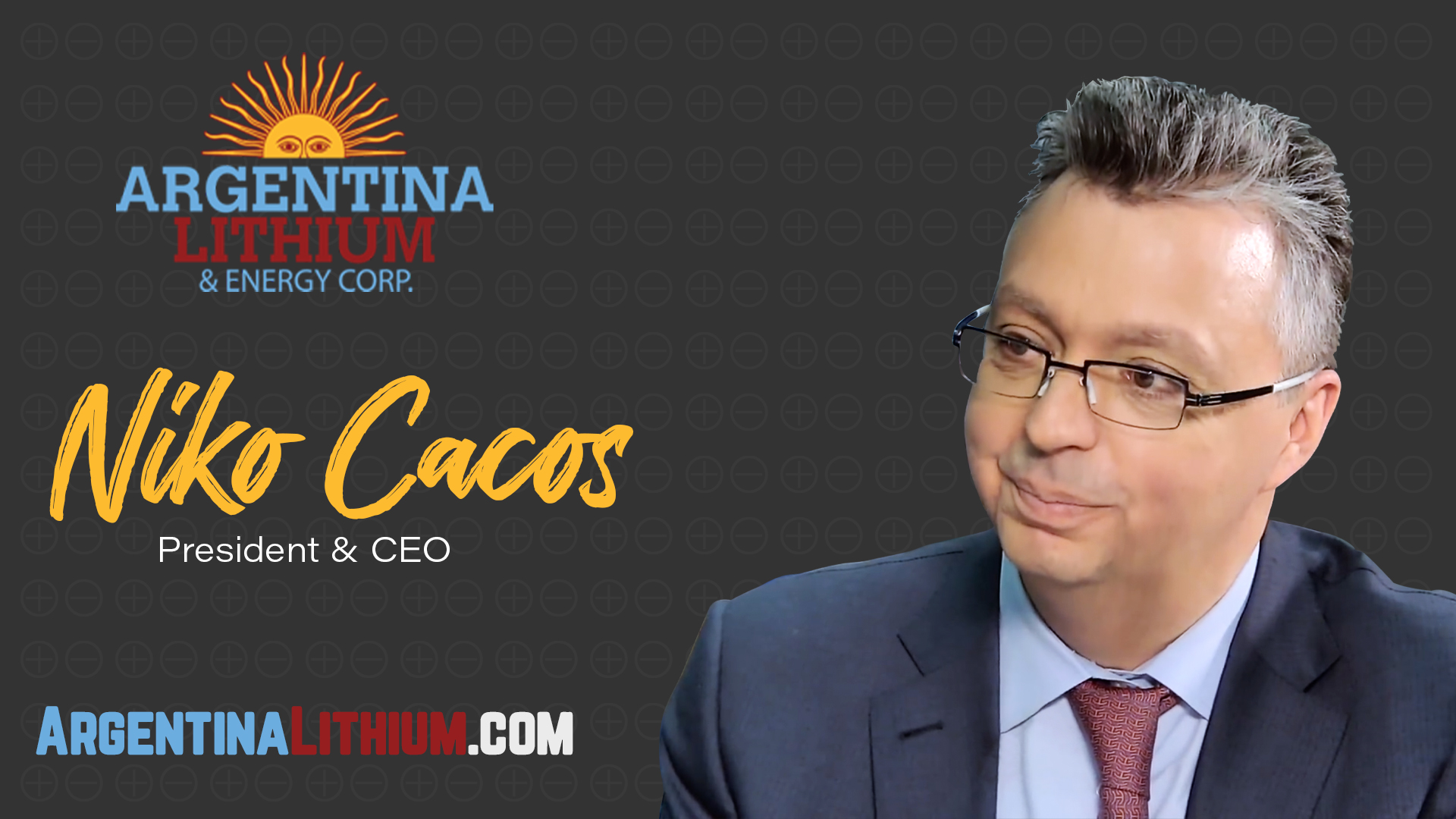 Argentina Lithium is led by president & CEO, Niko Cacos, who has worked with the Grosso Group since its inception and serves as a senior level executive for all of the group’s member companies.

Our own Gerardo Del Real of Junior Resource Monthly sat down with Mr. Cacos for an in-depth discussion on all-things Argentina Lithium & Energy Corp. Listen in to that interview here (written transcript is also available). Enjoy!

You can also learn more about Argentina Lithium & Energy here.