Rolling blackouts are a new normal for millions of Americans.

Nearly a million Californians lost power in August of 2020 as a record-breaking heatwave stretched the Golden State’s poorly-planned power supplies past their limits.

And this February, over 3 million Texans were forced to brave arctic weather without power due to outsized demand and intermittency issues among the state’s natural gas power plants.

But according to energy economists, this disastrous year is only the beginning of America’s electricity crisis.

Crumbling infrastructure, intermittent sources, poor planning, surging demand, and unpredictable natural disasters driven by climate change are combining to create a future where incidents like those in California and Texas could be commonplace throughout the country.

Politicians on both sides of the aisle have been peddling incorrect and heavily-partisan explanations for the growing unreliability of America’s electrical grid.

Republicans have falsely claimed that renewable energy was at fault for California’s blackouts, while Democrats have disingenuously tried to use the Texas disasters as a cautionary tale against the state’s laissez-faire economic policies.

In truth, the issue has nothing to do with turbines or taxes —  it’s simply the result of an outdated grid that is woefully unprepared for an increasingly chaotic set of weather conditions and electrical demand patterns.

The “grid,” in this context, refers to the traditional model of electricity generation and distribution in which large, centralized power plants are responsible for the entire power supply in a given region.

Power plants do their best to change their capacity in real-time in response to changes in demand — but they’re large industrial facilities that can’t easily start and stop on a dime.

Sometimes, they don’t react fast enough to extraordinary events like heatwaves, cold snaps, or power plant failures — and simply don’t produce enough electricity for all the buildings in their region to keep their lights on — causing blackouts.

Recently, however, engineers have started to experiment with a different model of electricity generation and distribution — one that could put an end to rolling blackouts, even in times of erratic demand and chaotic conditions.

It’s called distributed energy — and it’s one of the most underhyped investment opportunities of the 2020s.

What Is Distributed Energy?

By combining these small assets — which are often built into homes and businesses — distributed energy planners can supply electricity to the grid and adjust output in response to changing conditions much more nimbly than a large power plant can. 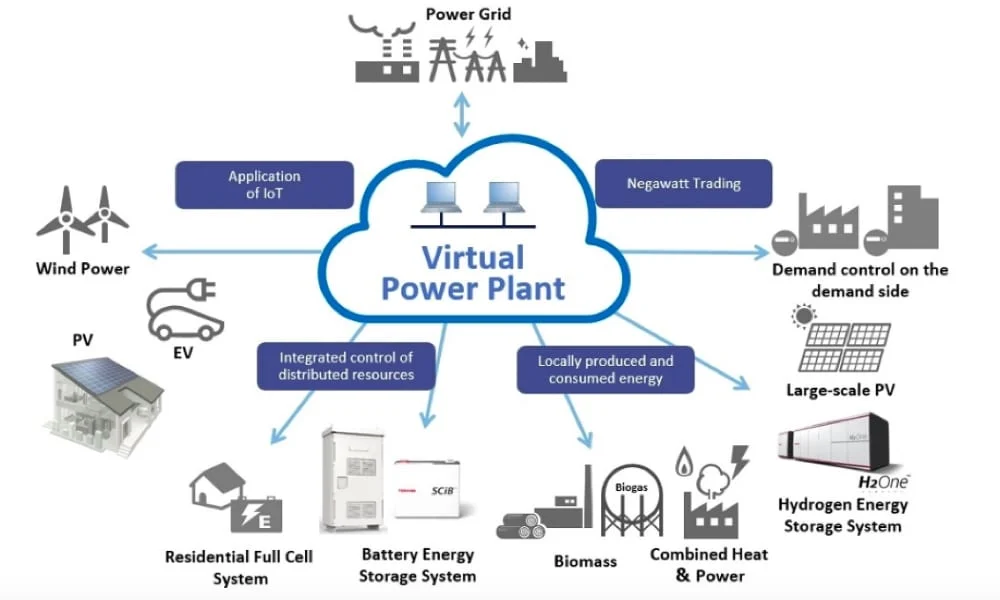 And since distributed energy consumers participate in the grid themselves — producing and storing much of their own energy in their homes and workplaces — they often end up paying a lower price than conventional electrical utilities charge.

And these aren’t just theoretical advantages.

Although a very new technology, virtual power plants already have a record of rescuing the grid during extraordinary situations that traditional power distribution models can’t handle.

Just a week after California’s mid-August-2020 rolling blackout weekend, the state was hit with another heatwave that threatened to stretch power supplies beyond their limits and plunge the state into darkness for a second time.

In a bid to avoid more rolling blackouts, grid operator CAISO made a desperate plea to demand response consumers, battery aggregators, generator owners, and even electric vehicle charging companies to add all the electricity they could spare to the grid — and it worked.

During that third week in August, California’s centralized grid providers technically failed to provide enough electricity to meet the state’s heatwave-driven demand — yet lights (and air conditioners) stayed on throughout the state.

According to subsequent reports by CAISO and the California Public Utilities Commission, the ad-hoc virtual power plant of private assets that was mobilized by CAISO’s distress call made up the difference.

Distributed energy has also seen a flurry of interest from public officials in the aftermath of the Texas energy crisis. Just take this comment from Energy Secretary Jennifer Granholm when asked about distributed energy by the Washington Post:

“I’m very supportive of microgrids, of these small modular nuclear reactors, of the ability to have distributed energy resources, community-based solar attached to a microgrid.

Those solutions are very exciting and could be, and certainly should be, part of the national system. We should be incentivizing communities to think about that so that they are not so dependent on, you know, poles with wires atop that were constructed 70 years ago.”

But the recent shift toward distributed energy isn’t just a disaster response strategy. Several public and private-sector catalysts had started to draw investor money long before the California or Texas blackouts…

Why The Smart Money Is Betting on Virtual Power Plants

In the U.S., private-equity investment in virtual power plant startups has accelerated significantly due to a perception that the Biden administration will introduce favorable policies for it.

In December, Sidewalk Infrastructure Partners, a venture capital arm of Alphabet (NASDAQ: GOOGL), announced that it was working with distributed energy startup OhmConnect to build the world’s biggest power plant.

The “Resi-Station,” as OhmConnect is calling it, will be a 550-megawatt project made entirely of batteries embedded into California homes and businesses. The project has received praise from former Obama EPA administrator Carol Browner.

And indeed, distributed energy policy is already changing in the U.S. In fact, it started changing significantly several months before Biden was even elected.

Back in September, the Federal Energy Regulatory Commission (FERC) issued Order No. 2222 — a change which removes regulatory barriers to virtual power plants by requiring grid operators to accept power from them — and to pay them at the same rate as traditional power plants.

The order, which grid operators must implement by September of this year, has been compared by energy economists to the 1993 computer networking regulatory changes that allowed private companies to use the previously-public-sector-only NSFNet telecommunications infrastructure, creating the modern commercial internet.

In the aftermath of those 1993 NSF changes, several entrepreneurs launched startups with the then-experimental idea of selling goods and services on the newly-opened network.

Just like back then, one company is set to dominate this new virtual power plant space.

I’m calling it the “Amazon of Energy”. And I think the gains could be similar.

Click here for all the details on how to profit from this energy shift.