The Great Safe Haven Rally of 2021

In the last six months, the US has fended off a devastating pandemic, almost-unprecedented political instability, and a period of historic stock market volatility driven by social media-savvy traders.

It shouldn’t exactly come as a surprise that many so-called safe haven investments like silver, palladium and Bitcoin have beaten the S&P 500 over that period.

But what’s perhaps more surprising is the safe haven that isn’t listed above — gold.

And there’s a reason for that...

Why The Other Safe Havens Have Outperformed Gold In 2021

In short, the price increases of silver, palladium, and Bitcoin aren’t actually part of a broader flight to safety. They’re being driven more by supply and demand factors in those individual assets.

They’re prices are inflating, yes. But they are doing so as commodities... not as currencies.
Bitcoin has been on a tear since last May, when the reward for mining new Bitcoins was cut in half. It was simply following a pattern investors have seen after previous reward-halving events in 2012 and 2016. And now another one is underway in 2021.

Palladium is reacting to growing demand for catalytic converters — essential car components which use a lot of the chemically-reactive metal — and mining constraints.

And silver’s bull run has been driven by increased industrial demand, as well as heavy speculation by commodity traders.

With stocks at all-time highs you have to ask yourself... Why would there be a flight to safety?

Put simply, inflation is now starting to manifest in a very real and registered way. And that is proving good for gold already as it rises toward $1,900 per ounce.

The Consumer Price Index (CPI) lept nearly 4.2% in April, beating the consensus estimate of 3.6% and marking its fastest growth since the Great Recession.

And this week the core personal consumption expenditures index for April came in higher than expected.

The causes of this inflationary spike are manyfold — easy-money government policies, recovery from the economic stagnation caused by COVID-19, and oil price action, to name a few.

The effects, however, will likely be simple: this inflationary spike should send gold into its next major bull market.

Especially because the dollar has been falling since April after rising for the first four months of the year... and gold now seems to be starting to take more cues from the dollar.

As you can see below, gold also pulled back in 2008 amid the Global Financial Crisis as the government started bailing out corporations and sending out stimulus checks.

But it didn’t take long for that inflation to catch up, sending gold to new highs in 2011. 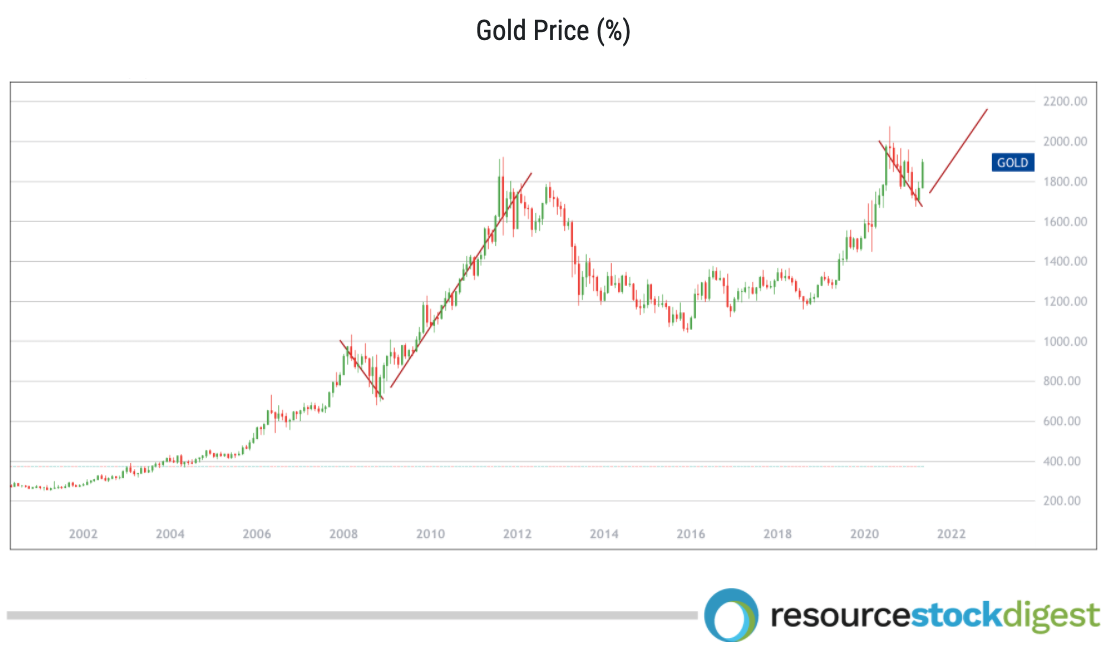 That two year period sent gold on a 250% run and gold stocks much higher than that.

And the exact same setup is happening right now.

Now that the economy is coming out of another recession — and now that the US government has dumped nearly $4 trillion into the money supply — there’s reason to believe history will repeat itself.

And when it does, investors who pick the right gold stocks will profit handsomely.

We’ve been tracking a small watchlist of miners that could see massive gains from the coming rally.

You can get them right here.

Nick Hodge
Publisher, Resource Stock Digest
Nick Hodge is the co-owner and publisher of Resource Stock Digest. He's also the founder and editor of Foundational Profits, Family Office Advantage, and Hodge Family Office . He specializes in private placements and speculations in early stage ventures, and has raised tens of millions of dollars of investment capital for resource, energy, cannabis, and medical technology companies. Co-author of two best-selling investment books, including Energy for Dummies, his insights have been shared on news programs and in magazines and newspapers around the world.