Uranium Rises: A Report on the Uranium Sector Amid Coronavirus

Publisher's Note: After a long wait since the Fukushima disaster in 2011, the uranium sector is kicking back into gear. Ironic that it took another disaster — the COVID-19 outbreak in 2020 — to set in motion the catalysts for a new uranium bull market. Our in-house mining expert, Gerardo Del Real, has put together this interview in light of recent events as a primer on uranium market fundamentals. It's with one of the most plugged-in executives in the uranium space, as you'll see. 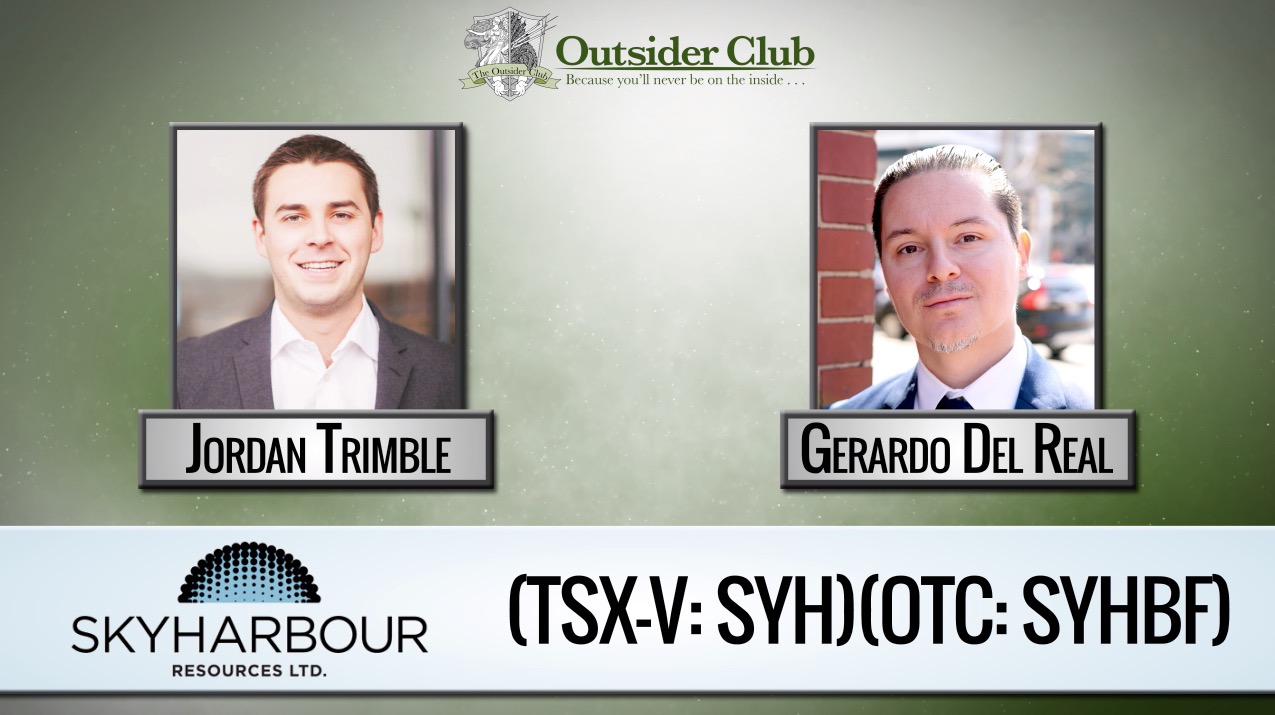 Gerardo Del Real: This is Gerardo Del Real with Outsider Club. Joining me today is the President and CEO of Skyharbour Resources (TSX-V: SYH)(OTC: SYHBF), Mr. Jordan Trimble. Jordan, how are you today?

Jordan Trimble: I'm doing good, thanks for having me.

Jordan Trimble: Everyone's doing well, all things considered. Happy to hear the same goes for you guys. But yeah, I mean it's unprecedented times, as we were talking about. And it's eerie seeing no one out on the city streets, and stores, and restaurants all boarded up, and we all hope that we can get back to some normality sooner than later.

Gerardo Del Real: The last time you and I spoke publicly was before the pandemic went global —  a different world by all accounts.

And I have to say Jordan, almost every single line item that you articulated in your thesis during that interview has come to pass, and it has not been inconsequential. We have spot uranium right at the $31 level. We've agreed I think that, once we broke through that $30 barrier, that eventually we were going to get a quick run to $40, and it sure looks like it's on its way.

Before we get into Skyharbour, and the multiple news catalyst that you have here coming up shortly, I want to rehash a bit about your thesis, and why you thought a that we were in a prime spot to really be looking at the better names. And again, to your credit and your staff's credit, you have been buying in the open market, you've been eating your own cooking and putting your money where your mouth is, and now that's starting to pay off. So let's talk a bit about this new uranium bull market, because I believe it's here.

Do you believe that is the case?

Jordan Trimble: Yeah, absolutely. And I guess it is fortuitous that it was only a month ago when we spoke, and obviously there's a lot that's happened globally in the last month, and will continue to happen over the coming months, right?

And it's, there's a lot of moving parts, there's a lot at work, specifically for our sector, and we've talked about this on and offline. But when you have a commodity of metal, where 80% of global production comes from 10 producers, 2/3 of primary mine supply comes from just a handful of operating mines.

You have major supply-side risk if there's any disruption, if there's any supply-side shock. Obviously everyone knows what's happened with the pandemic, and the resulting mine closures that we've seen. Well, I'm not so dissimilar to precious metals, base metals. Uranium, we've seen some major mines shut down, but when you do have such a concentrated supply profile as you have with uranium, it hits harder.

As we know, Cameco having to buy in the open market, in the spot market to meet their contract deliveries. Initially, we were told that it was going to be a four week suspension, that's what they had guided. They just came and announced that it was going to be now shut down for an indeterminate period of time. My gut on it is, if you look at what they've done at their other large high-grade mine in the Athabasca base in McArthur River, which has been shut down now for a few years. Really the other half if you will, of their production profile.

The economic and commercial factors I think will be the main decision making procedure for the restart. I think you're going to see Cigar Lake, I don't know if you'll see it simply turn right back on, once the health concerns subside with the virus. It's highly profitable, even with the rising uranium price in the spot market, it's still much more profitable for Cameco to be buying material in the spot market, and then reselling into their higher priced, longer term contracts. And why waste the pounds in the ground? These are high quality, high margin pounds in the ground at higher uranium prices. We all believe that we're going to see higher uranium prices going forward, so it does make sense for Cameco to continue buying in material in the spot market.

And while they can sell it at higher prices in these long-term contracts, continue doing that. And Cigar Lake and McArthur are large mines, they're big operations. They produce a lot each year, but they don't, they're not 20+ year mine lives, right?

So for each passing month that they are producing and operating, you're burning through reserves. And those are, like I said, high grade, high quality pounds in the ground. So better off waiting for higher prices, and then you can look to restart. My guess is you'll probably need to see $40 uranium. So that was initially at Cigar Lake, we saw that announcement out a few weeks ago, and then now the announcement that it won't restart for an indeterminate period of time. We'll keep an eye out for that over the coming weeks and months. We then saw Namibia announced closures, and production curtailment. Their uranium mines account for about 10% of global primary mine supply.

The big announcement from the largest producer, Kazatomprom in Kazakhstan, which accounts for 40% of global primary mine supply. They announced an initial production curtailment, three months, amounting to about 10.4 million pounds of uranium. So again, these are all initial cuts, the lengths that we've seen, in particular with Cigar Lake. It could be an extended period of time. Time will tell, but pretty meaningful primary mine supply cuts, amounting to well over 30% of global supply. And that's in addition to, as we've spoken about many times, the cuts that we've seen, the production curtailment that we've seen over the last three or four years. Like I said, McArthur River, a couple of other mines in Africa and Australia that have shut down, or are coming to the end of their mine lives.

I mean that's another big thing, it hasn't just been supply cuts from the low price environment. We are seeing production at some larger mines that will be coming to an end here over the next several years. And so again, a major supply-side response that has been playing out, that's continuing to play out, and now it's been exacerbated by the pandemic. And when you look at the other side of the equation on the demand side-

Jordan Trimble: I think one of the key things to note here is it's relatively inelastic. This is relatively sticky. We see reactors globally, we see reactors continue to be built. I think, as we spoke about offline, if you do see major infrastructure spend globally, that will obviously be beneficial for new nuclear reactors. They're big, big projects. We're seeing them being built in places like China and India, that need that clean, affordable, reliable electricity, and a lot of it.

So you have currently about 442 operable reactors, 54 reactors under construction, and about 440 more ordered, planned, and proposed. And these aren't the operating reactors right now, I don't think you're going to see any notable or major disruption to that. This is a baseload electricity that needs to be online.

I think you could see, if we do see, a major hit economically. The electricity demand, and decrease from this pandemic. I think you see intermittent sources from renewable and other smaller scale electricity generation. I think you see that come offline first, so I don't think you'll see any major demand side hit. And like I said, these are big, big projects. They're a big infrastructure spend, and I think you see the build out, the rollout of these reactors in places like China, and India, and other parts of the developing worlds continue.

So the demand side relative to what we're seeing on the supply-side. I think the demand side, we see continued growth there, and you have the advent of small modular reactors (SMRs). Where we're seeing now in Canada, and other parts of the world. We're seeing that the rollout of these small modular reactors, I think that that could add a lot of demand over coming years. So we're again, relatively inelastic demand side, and a supply-side that's been absolutely rough here. And any extended suspension of these mines, like Cigar, like the Kazakh mines, the mines in Africa, that'll just exacerbate that, and drive a higher price. Keep an eye out for some of the Australian mines, you got Olympic Dam, which is, even though uranium's a byproduct, it's still about 4 to 5% of global production in supply. So there is risk that additional supply comes offline, and again, forces a higher uranium price.

Gerardo Del Real: So you don't think, because I had a subscriber of Junior Mining Monthly write in, and his question was a good one. He said, "What do you say to people who believe that uranium is not a good commodity, because nuclear reactors are too expensive?" And added into the question by saying that, "There's a thought out there that they can't compete with renewable energy, particularly as utility scale battery storage systems gain traction." And I know you're talking your own book obviously, as am I, because I'm a believer in clean energy, and I believe you can't do that without uranium and nuclear reactors in a large scale fashion, but what would you say to that argument? And you touched on it in your comments there, but I just want to reiterate it, because I think it's important.