VANCOUVER, BC , April 7, 2021 /CNW/ - AUX Resources Corporation (TSXV: AUX) (OTC: AUXRF) is pleased to announce that it has received and reviewed results from the initial 1,000 metre diamond drill program at the Hume Creek Deformation Zone, immediately to the west of the Georgia River Mine.

"We are encouraged by the 2020 results from our first-pass drilling of the Hume Creek Deformation Zone.  It took 10 years from its 2010 discovery, only five holes and only 1,000 metres of drilling to establish the Hume Creek Zone as a major prospective regional structure for gold exploration," comments Dr. Paul Metcalfe , Director of AUX.  "The intersections, 70 to 200 metres beneath the ridge top, are at higher elevations than the high-grade gold-producing zones in the Georgia River Mine, yet all are anomalous to strongly anomalous in gold. Moreover, last summer's drilling returned vital geochemical information which will enable targeting of economic mineralization in this immense, highly prospective system, of which the Georgia River Mine is a part."

The 9,300-hectare high-grade gold Georgia Project, centred on the past-producing Georgia River Mine, is located on tidewater 16 km south of the town of Stewart, BC , in the prolific Golden Triangle. The Georgia River Mine, which last operated in 1939 with a head grade of 23 g/t gold, contains 1.2 kilometres of underground access on three levels. The project was explored from the 1970s by several companies with the intent of restarting the mine, but this historic work focused almost exclusively on the area hosting the existing mine workings.

The 750 metre wide Hume Creek Deformation Zone was discovered in 2010, exactly 100 years after the first gold discovery and its significance as a regional-scale structure and potential conduit for gold–bearing fluids was realized at that time.  Subsequent reconstruction of historic data and acquisition and processing of new geochemical and geophysical data enabled development and testing of a model of mineralization. Work by AUX over the past few field seasons has tested this model and generated compelling evidence in support of a large intrusion-related gold target adjacent to the area of previous work.

The target zone is marked by anomalous surficial samples, the cross-cutting regional Sovereign Fault, a coincident conductivity high, and Early Jurassic intrusions belonging to the Texas Creek Plutonic Suite – a crucial component to large gold deposits in the Golden Triangle. The regional-scale Hume Creek Deformation Zone provided the "plumbing system" for hydrothermal fluids related to these intrusions. Surface samples spanning more than a square kilometre carry gold values in excess of a gram per tonne, demonstrating the extensive nature of the system.

In 2020, five diamond drill holes were collared on the 750 metre wide Hume Creek Deformation Zone, at an elevation of 1,280 metres above sea level, 200 metres above and 600 metres west of the past-producing Georgia River Mine.  All targeted the Sovereign Fault and its prospective footwall at the core of the zone.

Four of the holes intersected gold values in excess of 0.5 g/t gold and one intersection, at a downhole depth of 138.7 metres (98 metres below surface and 150 metres higher in elevation than the Georgia River Mine) returned 7 g/t gold over 1.3 metres.  All five holes intersected multiple zones of anomalous gold values (greater than 0.12 g/t gold) to depths in excess of 200 metres.  Each anomalous gold intersection was coincident with a zone of elevated chemical alteration and moderately to highly anomalous As.

The single hole that targeted the zone at depth, GE 20002, intersected at least three intervals anomalous in Au and As.  Beneath a downhole depth of 250 metres, anomalous gold values were also coincident with anomalous Cu, Sb, Pb and Bi.  All these elements are geochemical pathfinders for gold in intrusion-related systems.  Typically, As occurs at the highest levels of such a system, while the other pathfinder elements are concentrated closer to economically significant values of gold.  The top of this multi-element pathfinder zone is at a depth of 200 metres, which is 50 metres above the elevation of the past producing area of the adjacent mine.

Drilling north of the mine along the SW Vein recently returned results including (news releases February 9, 2021 and February 23, 2021 ): 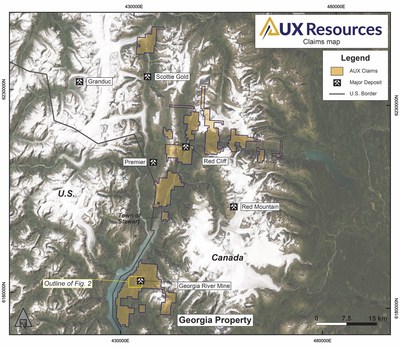 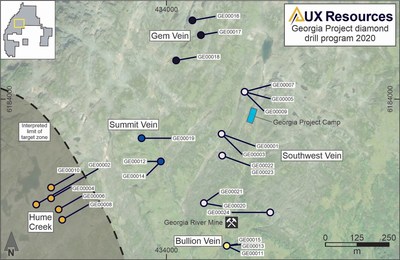 Samples were analyzed at MSALABS in Langley, Canada (an ISO 9001 accredited facility). The sampling program was conducted by the geological team under the supervision of Dr. Craig Stewart , Exploration Manager. A secure chain of custody was maintained in transporting and storing samples. Gold was assayed using fire assay with atomic absorption spectrometry and gravimetric finish when required (i.e., >9 g/t gold). Analysis by four acid digestion with 48 element ICP-MS analysis was conducted on all samples with silver and base metal overlimits being re-analyzed by emission spectrometry.

AUX holds more than 27,000 hectares of strategic claims in the Stewart Mining Camp in the Golden Triangle of British Columbia , which is among the world's most prolific mineralized districts, including the high-grade Georgia Project and the past-producing Georgia River Mine. AUX is actively consolidating the Stewart Mining Camp.

The technical disclosures in this release have been read and approved by Dr. Paul Metcalfe , Ph.D., P.Geo., a director of AUX and a qualified person as defined in National Instrument 43-101.