The Huancarama Breccia Complex (HBC) is a large exposure of mineralized tourmaline breccia within the main Soledad cluster of breccia pipes (Fig. 1). Several breccia bodies are exposed over a width of approximately 200m. Previous surface sampling and continuous underground channel sampling along a 170m long adit revealed strong gold and silver values (Fig. 2; also see news release dated May 23, 2018). Copper values are generally low due to the oxidized nature of the surface samples. Recent detailed mapping identified a 15m-long adit into one of the smaller breccia bodies (HBx2). Twenty-one metres of continuous channel samples on one metre intervals were collected from the adit and exposure of breccia outside the adit (Figs. 3 and 4). This continuous channel sample of 21 metres averaged 2.52 g/t Au and 100.4 g/t Ag. The estimated true width of the breccia from this sampling is 14.3m.  Huancarama will be drill tested during the next campaign when final drilling permits are obtained.

“The recent sampling provides additional confirmation of the potential of the Huancarama breccias,” said President and CEO David Kelley. “These breccias and the Paloma East and West breccias are examples of the numerous high priority targets we have yet to drill,” added Kelley.

In addition, Bx 3W is mineralized with pyrite in a well-developed tourmaline breccia but lacks significant grade to the depths tested. This may be a function of zoning with the potential for copper at depth.

Continued permitting delays have limited our ability to drill in the Huancarama and Paloma areas. While we have successfully completed drill testing on other priority targets to date, we have decided to temporarily suspend drilling until the permits are obtained for these higher priority targets. This will ensure that we have the capital available to drill high priority drill targets as soon as the proper permits are obtained. The recent dismissal of Congress by the current administration and subsequent temporary replacement of Cabinet positions until elections are held has caused additional disruptions in the permitting process.  We remain persistent in our approach to obtain the necessary permit approvals that will allow the restart of drilling.

Assay results are provided for two additional holes in Bx 5 East, two holes in the Corral Breccia, and one hole testing a target southeast of Bx 1. The two holes in Bx 5 East were drilled from new platform locations to provide better control on the geometry of the breccia (Fig. 5). The first hole at the Corral target intersected two mineralized breccia bodies, Corral Bx 1 and Corral Bx 2. The second hole intersected Corral Bx 1. Both holes were drilled downhill at shallow angles due the restricted access pending permits closer to the breccia bodies. Recoveries in the mineralized breccia were poor due to the shallow angles and broken nature of the rock. One exploration hole southeast of Bx 1 was drilled beneath a mineralized structure. Only a narrow interval of mineralization was encountered.

Mineralized intervals from Bx 5 East include:

Reported mineralized intervals are not true widths given the vertical nature of the breccia pipe and the steep inclination of the holes.

Chakana follows rigorous sampling and analytical protocols that meet or exceed industry standards. Core samples are stored in a secured area until transport in batches to the ALS facility in Callao, Lima, Peru.  Sample batches include certified reference materials, blank, and duplicate samples that are then processed under the control of ALS. All samples are analyzed using the ME-MS41 (ICP technique that provides a comprehensive multi-element overview of the rock geochemistry), while gold is analyzed by AA24 and GRA22 when values exceed 10 g/t.  Over limit silver, copper, lead and zinc are analyzed using the OG-46 procedure. Soil samples are analyzed by 4-acid (ME-MS61) and for gold by Fire Assay on a 30g sample (Au-ICP21).

Results of previous drilling and additional information concerning the Project, including a technical report prepared in accordance with National Instrument 43-101, are made available on Chakana’s SEDAR profile at www.sedar.com.

David Kelley, an officer and a director of Chakana, and a Qualified Person as defined by NI 43-101, reviewed and approved the technical information in this news release.

Neither TSX Venture Exchange nor its Regulation Services Provider (as that term is defined in the policies of the Exchange) accepts responsibility for the adequacy or accuracy of this release. 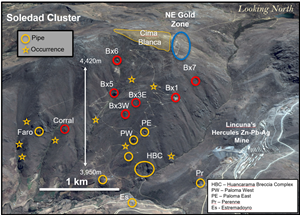 View looking north showing breccia pipes and occurrences within the Soledad cluster. Pipes that have been drilled are shown in red. Additional breccia pipes not shown occur in the Compañero cluster on the south half of the property. 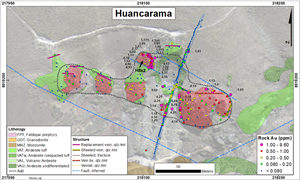 Map showing detailed geology of the Huancarama Breccia Complex and chip and channel assays for gold from surface and adit exposures. Mineralized tourmaline breccia are shown in red. Gold values greater than 1 g/t are labeled and range up to 9.60 g/t Au. 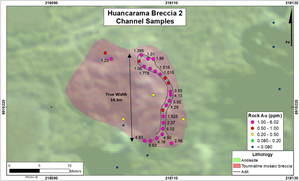 Map showing gold assays for detailed surface and subsurface sampling of the Huancarama Breccia 2 (HBx2) exposure. Mineralized tourmaline breccia are shown in red. Gold values greater than 1 g/t are labeled and range up to 6.02 g/t Au. Continuous channel samples are shown by the dashed blue line. 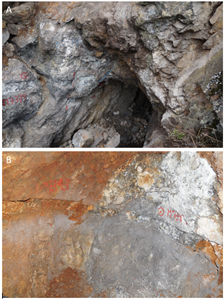 Photos showing A) recently discovered underground adit at the Huancarama Breccia 2 exposure, and B) channel samples taken from breccia exposure. Note the generally oxidized nature of the breccia. 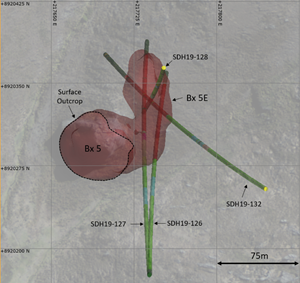