VANCOUVER, BC , Jan. 19, 2021 /CNW/ - Golden Arrow Resources Corporation (TSX-V: GRG) (FSE: G6A) (OTCQB: GARWF), ("Golden Arrow" or the "Company") is pleased to report that it has completed its shallow diamond drilling campaign and its first induced polarization ("IP") geophysical program at the Tierra Dorada gold project in Paraguay . These programs continue the work at the Alvaro area to delineate high-grade, quartz vein-hosted gold prospects and refine targets for full-scale follow-up drilling programs. Highlights of the combined programs include: 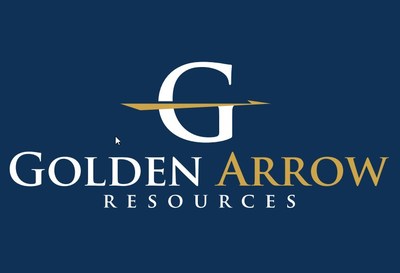 Golden Arrow VP Exploration and Development Brian McEwen commented, "The extensive soil and vegetation cover at Alvaro makes exploration challenging, so this shallow drill program was an excellent option to give us a better look at the subsurface than we were able to accomplish with prospecting or trenching.  We are pleased with the results, which in some cases have confirmed continuity of gold mineralization and veins below surface and in others have shown broader veins than expected with higher grades than the surface sampling."

Overall, the shallow drilling program has provided key insights into the location and behavior of gold mineralized veins at Alvaro, which, along with the new geophysical results, will aid in refining the targets for the next stage of work, which is expected to include at least 2,000 metres of diamond drilling by the end of the first quarter of 2021.

Golden Arrow's current prospecting permit in the Alvaro area allows drill holes up to twenty metres in depth. The objectives of this initial shallow drilling program were to follow and characterize the high-grade mineralized quartz vein structures below the surface and confirm the continuity of gold mineralization in the veins.

The holes tested three of the four more prospective gold vein showings (Showing 1, 2 and 4, see Figure 1: https://bit.ly/3qrzpMM ) where surface and trench sampling has returned multiple high-grade gold assays (see News Releases dated December 5, 2019 and May 27, 2020 for descriptions of the showings and previous results). In most cases the quartz veins were intercepted at a depth of 5 to 10 metres down hole. The average core recovery for the entire program was 74%; hole DHTD-30 was discarded due to very poor recovery. Visible gold was observed within the quartz veins in four holes, and due to the possibility of coarse gold in the veins, the intervals with quartz veins were not split and whole core was submitted for assay.

Drilling confirmed the continuity of several of the veins and gold mineralization at depth, however in some cases, veins showed little continuity below the surface, due to either a lenticular vein shape or as a result of fault displacements. As shown in Table 1, below, approximately half the holes returned intercepts of greater than 0.5 g/t gold, with a best interval of 6.0 metres at 14.53 g/t gold, including 0.5 metres at 143.50 g/t gold, in hole DHTD-18 at Showing 1. Hole DHTD-17 intercepted the same vein closer to surface, and returned 2.53 g/t gold over 2.95 metres (see Figure 2: https://bit.ly/3nXxPk8 ).

Quantec Geoscience Chile completed IP and resistivity surveys with both Gradient and Pole-Dipole ("P-DP") arrays at the Alvaro target area.

The gradient array covered an area of 4.2 km 2 around Showings 1 to 4. Gradient array lines were spaced every 100 metres utilizing 25 metres dipole receivers. Additionally, two P-DP lines (50 metre dipoles with n-levels 1 to 10) were completed perpendicular to the main trend of mineralization, with a total length of 4.6 km.

The geophysical surveys were designed to detect and delineate veins, hydrothermal alteration, faults and lithologic contacts below the 2 to 6 metres of soil and saprolite cover. The results of the Gradient Array surveys were presented as plan maps of IP chargeability and resistivity (see Figure 1). P-DP Array surveys were deployed over key anomalous areas to enhance the imaging of potential drill targets. The P-DP results were presented as pseudo-sections of chargeability and resistivity, and as 2D inversion models presenting cross-sections of the project area, imaging the ground to approximately 140 metres depth (see Figure 3: https://bit.ly/38XOFLL ).

Previous detailed mapping of the trenches indicated that three of the four main showings had a northeast-southwest strike (see News Release dated May 27, 2020 ). The distribution of chargeable response reported by the Gradient Array surveys confirm this district-wide tendency as seen in Figure 1.  Although the chargeability values measured during the geophysical program are relatively-low (less than 5 mV/V) they are sufficient to clearly confirm this trend. The Company interprets these chargeable responses to reflect the presence of low but anomalous levels of disseminated sulphides associated with the gold-mineralized vein structures.

Multiple new anomalies were identified from the Quantec survey, as detailed below. With the exception of the outcrops at Showing 3, all the geophysical anomalies detected in these surveys are covered by soil overburden.

The veins at Showings 1 and 4 coincide with chargeable and resistive lineaments detected by the Gradient Array survey, as was expected (see Figure 1). The anomalous chargeable and resistive trend correlating to Showing 4 has been traced over 850 metres strike extent. Showing 1 is centrally located on a parallel anomalous trend delineated by the gradient surveys over 1700 metres of strike extent which remains open to both the northeast and southwest. A similar anomalous trend has been identified in the gradient data at a position 250 metres to the northwest of Showing 4, indicating a future target of investigation. The southwest portions of these three trends lead into an extensive overburden-covered area of increased chargeable response coincident with a complex system of resistive lineaments, indicating the potential for additional exploration targets. This broad chargeable target area remains open to the west and south.

Showing 2, where several of the shallow drill holes intersected high-grade gold, coincides with a resistive lineament trending WSW-ENE, which has been delineated by the Gradient Array surveys over 900 metres of strike extent and which remains open to the west. This feature exhibits weak chargeability response. Several similar trends are evident to the north and south of Showing 2, the most conspicuous being a strongly resistive and chargeable east-west lineament detected 250 metres to the south of the showing in an overburden covered area.

Showing 3 is an extensive feature of anomalous gold responses trending northeast-southwest, as illustrated in Figure 1 and was not tested with the current shallow drilling program. Two chargeable trends have been delineated by the geophysical surveys crossing the Showing 3 trend at a shallow oblique angle. Anomalous gold values have been sampled at positions proximal to the points of intersection, suggesting a structural relationship with mineralization. Geological mapping in the vicinity of Showing 3 suggests the zone of increased chargeability located a short distance to the northwest coincides with sub-outcrops of ferriferous gneiss. Initial rock sampling of the exposed unit returned no gold values, however, additional investigation is planned for the geophysical and geochemical anomalies detected in this area.

The two P-DP lines in Figure 3 indicate that the chargeable trends evident in the gradient data extent to depths below the maximum depth of the survey. The P-DP 2D models will be used to interpret local targets, structures and lithologies and will be utilized for planning follow-up work and drill targeting.

The Company is now planning a second, more detailed, drilling program to both test the new geophysical anomalies and to step-out holes around the best intercepts reported in this news release. A minimum of 2,000 metres of drilling is expected to be completed by the end of the first quarter of 2021. The Company has applied for a full exploration permit to allow deeper drilling.  If those permits are in place, holes will have a depth of approximately 100 metres, otherwise the program will be adjusted and holes will be planned up to 20 metres depth. The technical team has also started another regional and detailed field program in the southern part of the concession, where historic data includes anomalous gold values of up to 7.04 g/t gold at the Itayuru target, approximately 10 km southeast of the Alvaro target area (see News Release dated August 14, 2019 ).

The samples were shipped to ALS (Copiapo, Chile ), an internationally recognized assay service with laboratories in Chile and Peru . Samples were prepared at the facility at Copiapo, Chile and assays for gold were done in Lima, Peru using fire assay with an atomic absorption finish on 50g aliquots. Samples with +10 g/t Au were re-assayed by fire assay with gravimetric finish also with a 50g aliquot. A 33 element analysis was performed by a four-acid digestion and detection by ICP-OES.

Golden Arrow follows industry standard procedures for the work carried out on Tierra Dorada Project, with a quality assurance/quality control (QA/QC) program. Blank, duplicate and standard samples were inserted in each batch of samples sent to the laboratory for analysis. Golden Arrow detected no significant QA/QC issues during review of the data.

The results of the Company's exploration program have been reviewed, verified (including sampling, analytical and test data) and compiled by the Company's geological staff under the supervision of Brian McEwen , P.Geol., VP Exploration and Development to the Company.  Mr. McEwen is a Qualified Person as defined in National Instrument 43-101, and has reviewed and approved the contents of the news release.

Golden Arrow Resources Corporation is a mining exploration company with a successful track record of creating value by making precious and base metal discoveries and advancing them into exceptional deposits. The Company is well leveraged to the price of gold, having monetized its Chinchillas silver discovery into a significant holding in precious metals producer SSR Mining Inc.

Golden Arrow is actively exploring a portfolio that includes a new epithermal gold project in Argentina , a district–scale frontier gold opportunity in Paraguay , a base-metal project in the heart of a leading mining district in Chile and more than 180,000 hectares of properties in Argentina .

The Company is a member of the Grosso Group, a resource management group that has pioneered exploration in Argentina since 1993.

Forward-looking statements are subject to a number of risks and uncertainties that may cause the actual results of the Company to differ materially from those discussed in the forward-looking statements and, even if such actual results are realized or substantially realized, there can be no assurance that they will have the expected consequences to, or effects on, the Company. Factors that could cause actual results or events to differ materially from current expectations include, among other things: the impact of COVID-19; risks and uncertainties related to the ability to obtain, amend, or maintain licenses, permits, or surface rights; risks associated with technical difficulties in connection with mining activities; and the possibility that future exploration, development or mining results will not be consistent with the Company's expectations. Actual results may differ materially from those currently anticipated in such statements. Readers are encouraged to refer to the Company's public disclosure documents for a more detailed discussion of factors that may impact expected future results. The Company undertakes no obligation to publicly update or revise any forward-looking statements, unless required pursuant to applicable laws.