Heliostar CEO, Charles Funk, commented “These results are an excellent start to our drilling program at La Lola.  To prove that higher grades occur within the main La Barra vein is a significant development and the company continues to drill looking for the heart of the system.    This 1,500-metre program is the first ever drilling completed at La Lola and if Heliostar can demonstrate ore grades we can then step-out along the entire length of the La Barra vein.”‍

La Lola Drill Program
The current drilling program commenced with a shallow hole to confirm the dip of the main La Barra vein, followed by successively deeper tests of the vein.  In holes LOLA21-01, LOLA21-02 and LOLA21-03, two subparallel veins have been intersected and comprise multi-phase massive to crystalline quartz, calcite and fluorite with local very fine-grained sulphides.  The quartz rich phases of the vein range from locally finely banded at surface to a variety of breccia textures, including high energy breccia textures, at depth.  This is interpreted as a vector towards the mineralized centre of the epithermal vein.

Table 1:  Table of intersections from the La Barra Zone.  True thickness is unknown.

The property includes the prospective La Barra vein, a 5 kilometre-long quartz-carbonate-fluorite vein with elevated values of gold, silver and pathfinder elements.  In outcrop the vein is up to 40 metres wide and has textures typical of shallow epithermal formation.  Broad clay alteration, fluorite and low temperature textures suggest that the surface expression of the La Barra vein is the higher levels of an epithermal system and that the metal-rich zone of the epithermal system may exist at depth. 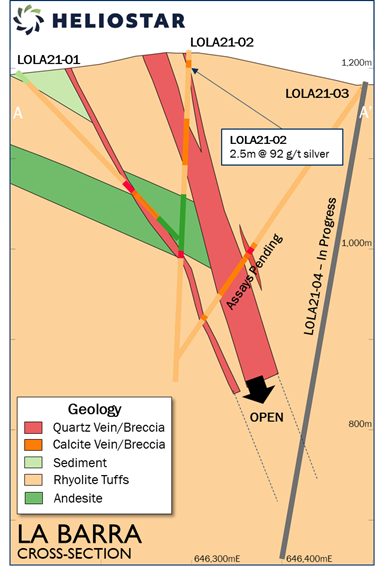 Precious metals values in rocks on surface generally contain low values as would be expected based on the shallow level expression of the geological model.  However, values up to 56.6 grams per tonne (g/t) gold and up to 424 g/t silver have been found within the larger vein zone and are believed to represent stronger pulses of mineralization that were able to propagate closer to the surface.  Historic mining on the vein has focused on fluorite that occurs near surface within the vein zone and is a shallow level feature of other productive systems such as at the Los Gatos mine in Chihuahua. 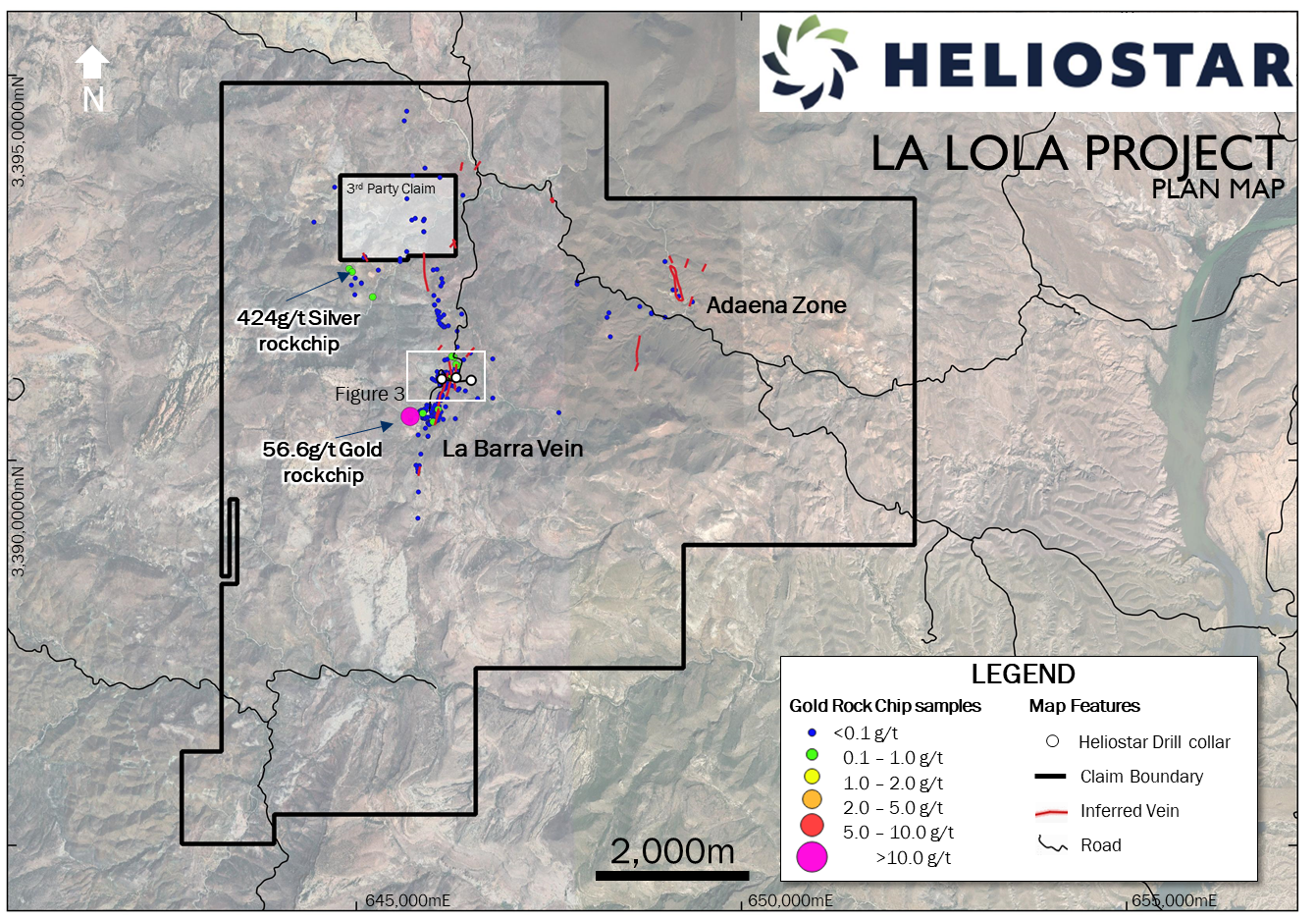 Figure 2:  Map of La Lola claim with gold in rock chips and veining and alteration shown 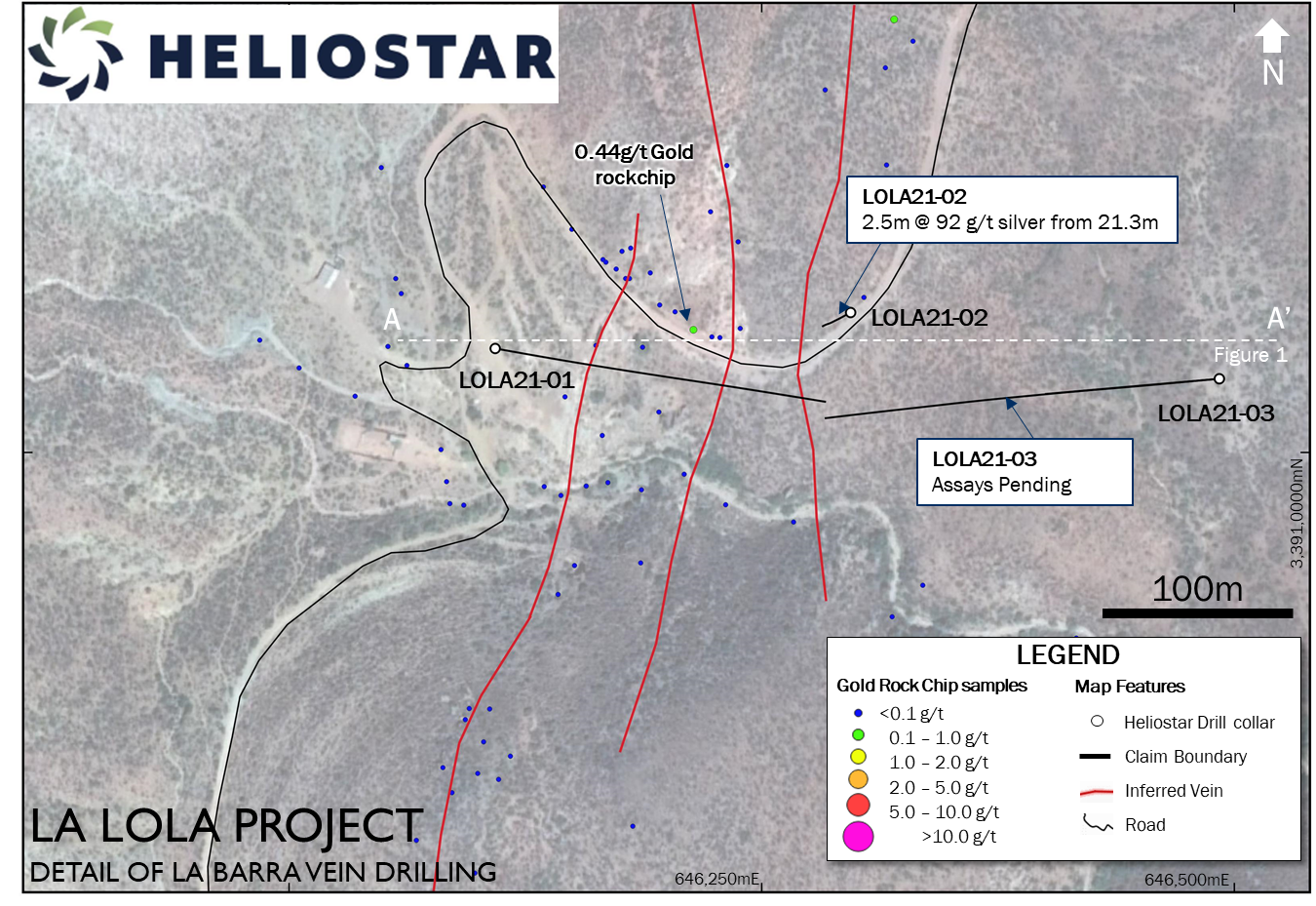 Heliostar is a well-financed junior exploration and development company with a portfolio of high-grade gold projects in Alaska and Mexico.  The company’s flagship asset is the 100% controlled Unga Gold Project on Unga and Popof Islands in Alaska.  The project hosts an intermediate sulfidation epithermal gold deposit, located within the district-scale property that encompasses 240km2 across the two islands. Additional targets on the property include porphyry, high sulphidation and intermediate sulphidation epithermal veins. On Unga Island, priority targets include: the SH-1 and Aquila, both on the Shumagin Trend, the former Apollo-Sitka mine, which was Alaska’s first underground gold mine and the Zachary Bay porphyry gold-copper prospect.  Gold mineralization at the Centennial Zone is located on neighbouring Popof Island within four kilometres of infrastructure and services at Sand Point.