Heliostar Finds Vein Beneath Historic Apollo-Sitka Mine and Drills 5.1 g/t AuEq over 1.95 Metres at Unga Project

Vancouver, Canada, March 1st, 2021 – Heliostar Metals Limited (TSX.V: HSTR, OTCQX: HSTXF, FRA: RGG) ("Heliostar" or the "Company") is pleased to announce results from four of seven holes at the Apollo-Sitka Mine target in the Unga project, Alaska. Results from the remaining holes will be reported when they return from the assay laboratory.

The Apollo-Sitka mines produced gold from high-grade material at the turn of the 20th century. Mining ran from 1891 to the early 1920s and stopped when the high-grade gold ores transitioned to include a high base-metal content at depth. Historic exploration shafts demonstrated the vein continued beneath the mined areas.  Despite evidence of strong mineralization at depth there is no record of drilling underneath the mines until this program.

Heliostar CEO, Charles Funk, commented “This initial drilling intersected multiple sub-parallel veins in the Apollo area, demonstrated strong gold grades and accurately located the veins at depth. Drilling a wide stockwork zone surrounding the Sitka workings increases the economic potential of this area and demonstrates proof of our geologic concept that this area has more mineralized material to offer. The company will begin systematically drilling at Apollo-Sitka when we recommence our program in late March with a goal of defining the full extent of mineralization found by earlier miners.”

The Apollo and Sitka showings are located along a seven-kilometre long southwest-trending structural corridor that hosts multiple veins and runs sub-parallel to the SH-1 structural trend.

A northwest dipping sequence of basaltic andesite interbedded with volcaniclastic sandstones hosts the Apollo mineralization.  An open stope that exploited three veins extends for over 300 metres along strike and approximately 425 meters in depth. Veins outlined to date strike northeast and dip both steeply northwest and southeast.  The veins contain coarse comb-textured quartz, with calcite, pyrite, galena, sphalerite and chalcopyrite.

Three holes have been completed beneath the main Apollo mine (Figure 1, Shaft 1 area).  The first hole intersected mine workings at the target depth, the second deviated to the east, away from the target and the third intersected two veins with the best intercept of 1.95m grading 5.10 g/t gold equivalent.

Additional drilling is required to complete an accurate cross section due to the discovery of multiple veins and the recognition of post-mineralization faulting.  Confirming the vein location beneath the mine workings, demonstrating parallel veins and strong gold mineralization forms an excellent platform for systematic step-out drilling in the 2021 program.

The Sitka workings are approximately one kilometre northeast of the Apollo Mine. An open stope and a series of historic trenches expose the mineralization at Sitka for about 150 metres. Sitka mineralization trends easterly to northeasterly. It dips steeply to the south and is hosted within andesitic volcanic rocks.  Mineralization comprises cockade quartz veining, stockworks and breccias with pyrite, galena, sphalerite, and chalcopyrite along the margins of the quartz veins and fragments within the breccia.

Four holes intersected a combination of workings, veins and broad stockwork zones.  The broad stockwork zone intersected next to workings in hole APS20-04 has not been described in any known historic reports and its discovery significantly increases the economic potential of the Sitka area. The Sitka area will be a focus for the company during the 2021 drilling program. 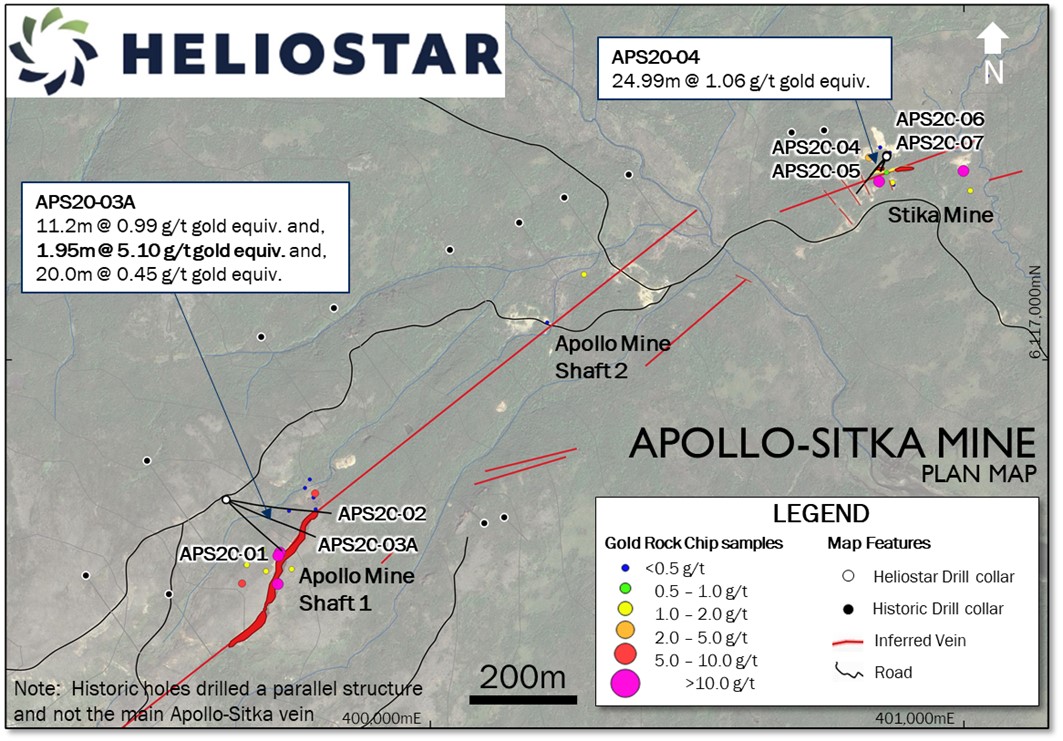 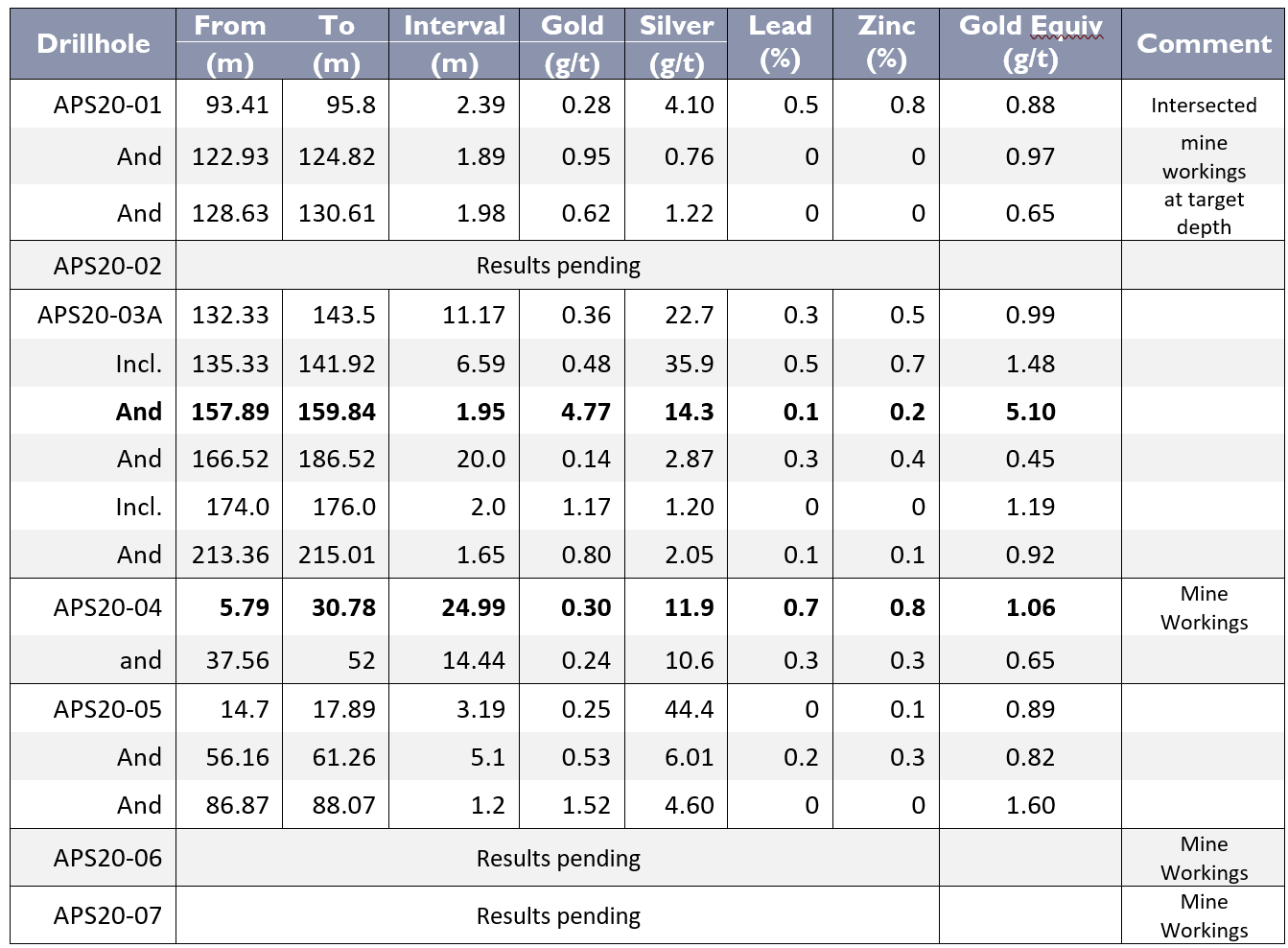 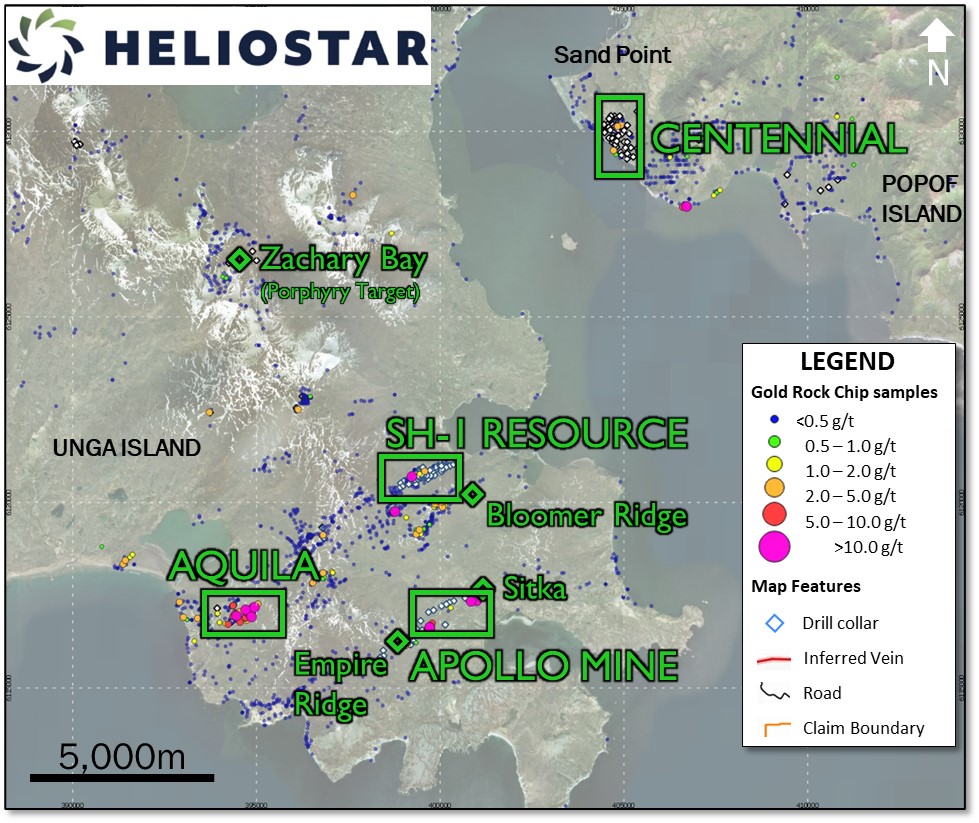 Heliostar is a well-financed junior exploration and development company with a portfolio of high-grade gold projects in Alaska and Mexico.  The company’s flagship asset is the 100% controlled Unga Gold Project on Unga and Popof Islands in Alaska.  The project hosts an intermediate sulfidation epithermal gold deposit, located within the district-scale property that encompasses 240km2 across the two islands. Additional targets on the property include porphyry, high sulphidation and intermediate sulphidation epithermal veins. On Unga Island, priority targets include: the SH-1 and Aquila, both on the Shumagin Trend, the former Apollo-Sitka mine, which was Alaska’s first underground gold mine and the Zachary Bay porphyry gold-copper prospect.  Gold mineralization at the Centennial Zone is located on neighbouring Popof Island within four kilometres of infrastructure and services at Sand Point.

Drill core samples were shipped to ALS Limited in Fairbanks, Alaska for sample preparation and for analysis at the ALS laboratory in North Vancouver.  The ALS Fairbanks and North Vancouver facilities are ISO/IEC 17025 certified.  Silver and base metals were analyzed using a four-acid digestion with an ICP finish and gold was assayed by 30-gram fire assay with atomic absorption (“AA”) spectroscopy finish and overlimits were analyzed by 30g fire assay with gravimetric finish.