Vancouver, British Columbia--(Newsfile Corp. - March 25, 2021) - Heliostar Metals Limited (TSXV: HSTR) (OTCQX: HSTXF) (FSE: RGG1) ("Heliostar" or the "Company") is pleased to announce that it is beginning the next field program at its Unga project on Unga and Popof Islands, Alaska.

Heliostar CEO, Charles Funk, commented, "The 2020 drilling program at Unga demonstrated the district scale opportunity that the project represents. The favourable climate in southwestern Alaska allows an early start to our 2021 program and a longer exploration season to expand on last year's successful work program. The three drill rigs will focus on expanding the open drill intersections at Apollo-Sitka, Aquila and SH-1 with an initial project goal of expanding the current resource to greater than one million ounces."

The team is currently mobilizing to site to establish the field camp and drilling will commence in early April. Fieldwork will build on the 2020 drilling program and the company will return to the three main zones at Unga; Apollo-Sitka, Aquila, and SH-1 and test new high priority district targets.

A total of three drill rigs will be employed: a diamond drill will continue to expand mineralization beneath the SH-1 resource while two RC drill rigs will step out from the Aquila discovery and the Apollo-Sitka veins. The RC drill rigs will also be used to rapidly evaluate new targets at Unga. This complementary pairing will allow the company to advance our high probability targets while also advancing the pipeline of additional prospects.

The team will follow up last year's success at Apollo-Sitka. That program yielded two holes with exciting intersections:

The 5.10 g/t gold equivalent over 1.95 metre intercept beneath the Apollo shaft 1 area identified an exciting new opportunity for discovery at this historic mine.

Last season's drilling intersected multiple sub-parallel veins and located the veins at depth in the Apollo area. The drilling in the wide stockwork zone surrounding the Sitka workings demonstrated that this area has more mineralized material to offer. 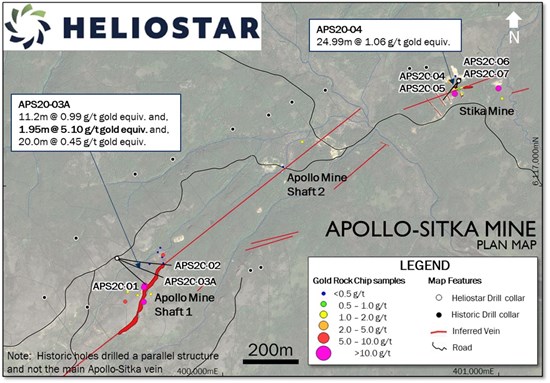 This season, the company will begin systematically drilling at Apollo-Sitka with a goal of defining the full extent of unexploited mineralization found by earlier miners. Drilling will commence at the Apollo Shaft 2 and Sitka areas where historic workings have delineated veins with gold and base metals that could not be profitably mined using the technology available at the turn of the last century but where current techniques commonly prove effective in similar geologic settings.

Drilling will move along strike to the Apollo Shaft 1 area, the source of the majority of 130,000 ounces of historic gold production, testing the veins in areas where faults made finding the continuations of the veins along strike and downdip difficult and where increasing base metal content made recovering gold at depth more challenging.

High priority drill targets further to the west of Apollo and along the same structure include Empire Ridge, where 2020 drilling intersected 9.35 metres of 0.507 gold equivalent near surface, California, and Heather.

In 2020, Heliostar's first hole at the Aquila discovered two veins within a wide shallow intercept:

Note: All numbers are rounded and widths represent downhole lengths. True thickness is estimated at 35-90% of downhole thickness.

The Aquila target is a new zone at the Unga project. Drilling a wide, shallow interval of gold mineralization in the first hole opens an entirely new and exciting area of exploration. Aquila is interpreted as on the same structure as the SH-1 resource, just six kilometres away. In this area, gold mineralization outcrops over 850 metres. It is one of the high potential exploration targets identified and drilled in 2020. 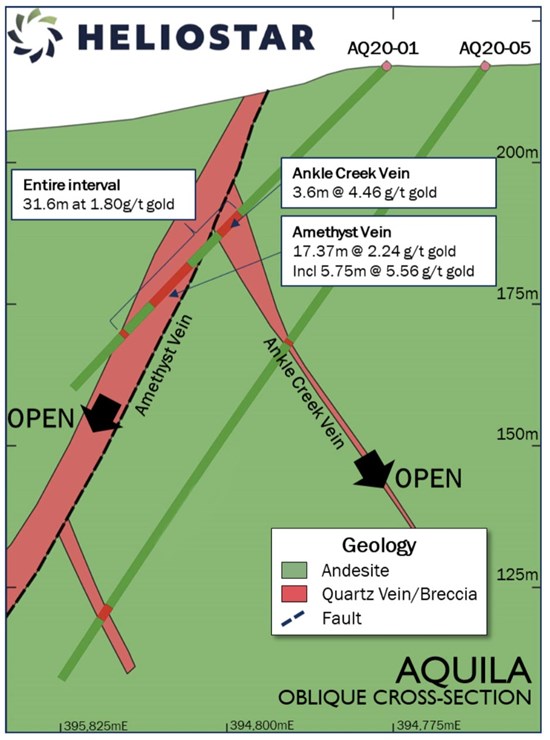 Aquila follow-up drilling is a priority for the 2021 program and represents both an underground and open pit opportunity. This program will take full advantage of the RC drilling to rapidly assess mineralization along the two principle vein orientations. The Amethyst vein was only intersected in one hole from the 2020 drilling and has the potential for significant strike length. While exploration on the Ankle Creek Vein will focus on locating features that cause the veins to widen such as flexures, dilational jogs, or areas where the veins coalesce. The intersection of these two structures along strike to the east and at depth is also a prime target.

In 2020, SH-1 delivered robust widths and high grades as the company expanded on the historical drilling, particularly in holes SH20-03 and SH20-04. The holes drilled in the upper areas of SH-1 upgraded the quality of the existing shallow resource. In addition, they provided insight into the internal geometry of the high-grade mineralization. In 2021, the company will continue infilling and stepping out beneath open intersections at the SH-1 zone using this improved understanding.

Note: All numbers are rounded and widths represent downhole lengths. True thickness is estimated at 80-85% of downhole thickness. 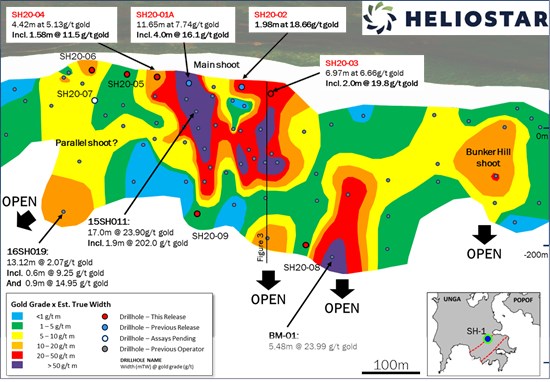 Drilling in 2020 provided valuable information about the steeply raking geometry of the high-grade mineralization at SH-1 that is of great value in planning the 2021 drill program. Drilling will also focus on the downdip extent of the main ore shoot which remains unconstrained. Furthermore, drilling also shows that there are several parallel shoots along strike from the Main Shoot that remain open. Testing these areas with the core drill rig will be a priority for the 2021 season.

More than 35 prospects are located within Heliostar's Unga land package, which are being reviewed and prioritized for drill testing. The company will undertake surface exploration to rank these based on prospectivity and advance them to drill ready status for a subsequent phase 2 program. Key targets include Centennial, the Zachary Bay porphyry, Norm's Vein, Beach Vein, Disney, California, Bloomer Ridge and the Pook Vein.

We look forward to a safe and productive field season at Unga in 2021.

Heliostar is a well-financed junior exploration and development company with a portfolio of high-grade gold projects in Alaska and Mexico. The company's flagship asset is the 100% controlled Unga Gold Project on Unga and Popof Islands in Alaska. The project hosts an intermediate sulfidation epithermal gold deposit, located within the district-scale property that encompasses 240km2 across the two islands. Additional targets on the property include porphyry, high sulphidation and intermediate sulphidation epithermal veins. On Unga Island, priority targets include: the SH-1 and Aquila, both on the Shumagin Trend, the former Apollo-Sitka mine, which was Alaska's first underground gold mine and the Zachary Bay porphyry gold-copper prospect. Gold mineralization at the Centennial Zone is located on neighbouring Popof Island within four kilometres of infrastructure and services at Sand Point.

In Mexico, the company owns 100% of three early stage epithermal projects in Sonora that are highly prospective for gold and silver. Cumaro forms part of the El Picacho district, while the Oso Negro and La Lola projects are also prospective for epithermal gold-silver mineralization.

The Company's disclosure of technical or scientific information in this press release has been reviewed and approved by Stewart Harris, P.Geo., Exploration Manager for the Company. Mr. Harris is a Qualified Person as defined under the terms of National Instrument 43-101.