KORE's CEO Scott Trebilcock stated: "With systematic exploration, the immense potential of the Mesquite-Imperial-Picacho District is starting to emerge.  KORE controls 100% of the District which was split between major gold companies in the 1990's.   With the Mesquite mine, the last in Imperial County , nearing the end of its life, KORE's Imperial project and surrounding District may be the last chance to extend the 140-year gold mining history of Imperial County to future generations and provide much needed employment and economic development."

KORE is committed to operate within the stringent environmental and labour standards of California and plans to concurrently reclaim drill pad locations and ensure measures are taken to mitigate any impacts to biological and cultural resources.  KORE has designed the drill programs to maximize the use of existing public road/trail network in the area so as to limit any new disturbances, and the Company will be adjusting our drill pad locations as needed to avoid any sensitive sites should any be encountered.

Figure 1 shows the dry stream bed and rock chip sampling locations.  The sampling generated anomalous gold assays in multiple new targets areas. There are government mapped faults associated with several of the anomalies, increasing the prospectively of targets. Figure 2 show the District claim area with location of the Mesquite, Imperial and Picacho deposits along with the newly staked claims.

Future geophysics and other exploration techniques are expected to further define these anomalies.  Having the intact Imperial deposit to "tune" or "fingerprint" geophysical signatures, greatly enhances our confidence to target new discoveries under the alluvium along the trend. Details of the work were released January 7, 2020 , April 29, 2020 and December 8, 2020 .

Sampling and Mapping Program Details
Discovery of gold in the dry stream beds (also called " arroyos " or " washes ") on the target areas are several kilometers from Picacho and Imperial and not downstream from either, indicating that gold is likely being generated from another source.  KORE intends to explore and discover those sources.

In the course of collecting the District samples and mapping the area, KORE encountered more outcrop than originally anticipated.  This is positive as it indicates the alluvial cover is shallow in those areas, making a new oxide gold discovery easier and more attractive.  KORE also found evidence of historic small scale mining activities in the District including hand and bulldozer trenches, an exploration shaft and signs of historic placer mining activity.

KORE's exploration team collected 497 stream bed and 178 rock chip samples over the last three months of prospecting the District.  All assays, except 11 rock chip samples, have now been received and are disclosed.  Samples collected averaged 4.75 kilogram in size and were taken at an average depth of 0.4 meters below surface.  Of the 497 stream samples, 322 assayed over the gold detection limit of 5 parts per billion and 10 assayed over 100 parts per billion (0.1 g/t).  Sample locations and assays for the eastern area from Imperial to Picacho are depicted on Figure 1 .

About the Imperial Gold Project
KORE owns 100% of the Mesquite-Imperial-Picacho District which consists of 30,900 acres of claims capturing the entire 28-kilometer trend from the operating Mesquite mine (Equinox Gold - TSX:EQX) to the closed Picacho mine and including KORE's Imperial project as depicted on Figure 2 .   In the District, gold is hosted in local fault structures related to a series of regional faults connecting the known District deposits.  Those three District deposits (Mesquite-Imperial-Picacho) were discovered in exposed outcrops and from placer workings.  The rest of the District is covered by alluvium and has never been systematically explored.

The Mesquite-Imperial-Picacho District centers on KORE's Imperial project. Imperial is a structurally controlled intermediate sulfidation epithermal gold deposit. The 100% oxide gold deposit is currently defined at 2.44 kilometer long and up to 0.75 kilometer wide and is open both along strike and downdip. It is hosted in a shallowly southwest dipping, amphibolite grade metamorphic rock suite along a west-northwest trending low-angle regional thrust fault system which controls the regional geometry of mineralization. East-west striking, post-mineralization normal faults control the property scale geometry of mineralization. Geophysical characterization of the deposit and regional controlling structures is an essential component of exploration for additional resources.

Imperial has a mineral resource estimate and a positive preliminary economic assessment effective April 6, 2020 with the following highlights:

About KORE Mining
KORE is 100% owner of a portfolio of advanced gold exploration and development assets in California and British Columbia.  KORE is supported by strategic investor Eric Sprott who owns 26%.  KORE management and Board are aligned with shareholders, owning an additional 38% of the basic shares outstanding.  KORE is actively developing its Imperial Gold project and is aggressively exploring across its portfolio of assets.

Technical information with respect to the District and Imperial Gold Project contained in this news release has been reviewed and approved by Marc Leduc, P.Eng, who is KORE's COO and is the qualified person under National Instrument 43-101 responsible for the technical matters of this news release.

Additional risks and uncertainties are described in the "Risks" section of the Company's management discussion and analysis for the year ended December 31, 2019 prepared as of April 27, 2020 available under the Company's issuer profile on www.sedar.com . 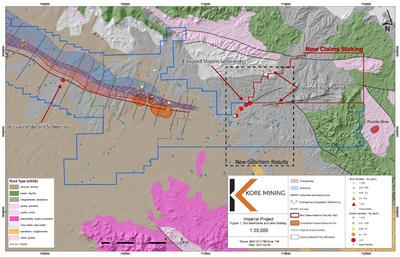 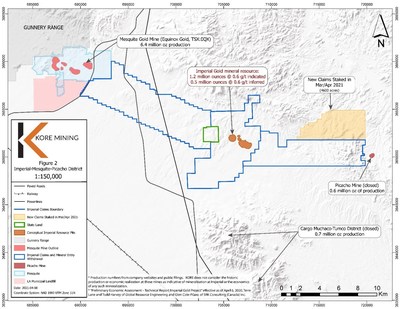 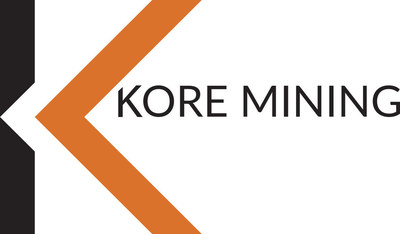