VANCOUVER, British Columbia, May 14, 2020 (GLOBE NEWSWIRE) -- Millrock Resources Inc. (TSX-V: MRO, OTCQB: MLRKF) ("Millrock" or the “Company”) is pleased to provide an update on drilling at its 64North Gold project. Exploration work is being funded and managed by Resolution Minerals (“Resolution” ASX: RML) in a collaborative arrangement with Millrock as the project operator. The 64North Gold Project is a very large tract of claims in Alaska’s emerging Goodpaster Gold District.

The target being drilled at the Aurora Target is adjacent and immediately west of the Pogo Mine property, which is owned and operated by Northern Star Resources Ltd. (“Northern Star”). Northern Star has previously reported a gold resource of 5.95 million ounces of gold in a series of veins grading 9.6 grams per tonne gold (Source: Northern Star website). More than four million ounces of gold has already been mined at Pogo and Northern Star has recently announced a new gold discovery called the Goodpaster deposit a short distance away from the mutual claim boundary. Millrock cautions that mineralization on the nearby Northern Star property is not necessarily indicative of gold mineralization hosted on the Company’s property.

Millrock President & CEO commented: “The core drilled in the first two holes of the program demonstrated a Pogo-like system with an abundance of alteration and sulfide mineralization indicating a robust hydrothermal environment. There are eleven gold-anomalous intersections in the first hole and three in the second hole. The style of mineralization and alteration intersected appears to be similar in character to Northern Star’s Goodpaster gold deposit located immediately to the northwest of our Aurora Target. We will continue the systematic exploration of the favorable geophysical and structural/stratigraphic targets that comprise the Aurora Target area.”

Hole 20AU001 was collared at an azimuth of 145 degrees and a dip angle of -80 degrees. It was drilled to a depth of 462.4 meters to test a gently-dipping conductive zone detected by a CSAMT geophysical survey. The conductor was explained by multiple fault zones with strong sericite-dolomite alteration. Multiple zones of quartz veining and quartz breccia were intersected. Gold is strongly anomalous and correlates well with pathfinder elements arsenic, bismuth, and tellurium. The mineralization zone is similar in appearance to that reported from the Goodpaster deposit by Northern Star. Anomalous gold intersections are shown in Table 1 which includes assays previously reported from the upper portion of the hole. The correlation between the pathfinder elements and gold can be observed on the strip log presented below as Figure 2.

Hole 20AU002 was suspended in progress due to COVID-19 safety concerns above target level at 194.5 meters. The planned depth was 600 meters. The hole was targeting a conductive zone near the interpreted position of faults thought to be mineralizing pathways. The hole predominantly intersected quartz-biotite-feldspar-gneiss (paragneiss). Though above target level, several quartz veins with anomalous gold values were intersected. Table 1 shows anomalous gold intersections obtained in Hole 20AU002 in the portion of the hole drilled before the program was suspended.

The table above documents intervals exceeding 0.3 grams per tonne gold. It is not known with certainty whether these intersections represent true width. Further information from other drill holes is needed. Intervals were calculated using a 0.3 gram per tonne gold cutoff with a maximum 0.4 meter internal dilution.

The Aurora target is a two-kilometer by five-kilometer-long zone of low-magnetic rocks adjacent to a late diorite intrusion. The setting is very similar to that observed at the Pogo Mine. Millrock postulates that the late diorite body intruded along a westerly extension of the Liese Creek fault, which is known to have played a key role in the genesis of the Pogo gold deposits. Highly anomalous gold-bismuth-arsenic in soil is documented. High-angle gold-bearing quartz veins have been intersected by prior drilling, however, the few holes drilled by earlier workers did not go deep enough to intersect the low-angle, regional shear zone that is known to host gold at Pogo and the Goodpaster Deposit. Millrock believes this structure exists at the Aurora target. Numerous zones of mafic rocks, fault zones and quartz veins intercepted in drill hole 20AU001 fit with the exploration model. The low-angle, regional shear preferentially ruptured the mafic lithological layers. The Aurora Target is located in this regional shear.

Further drilling is set to begin in late May 2020. Millrock, along with its funding partner and drilling contractor, have developed a comprehensive COVID-19 safety plan with clear protocols that will help keep the team safe.

Resolution can earn up to a 60% interest in the 64North Gold Project through exploration expenditures of US$20 million, payment of US$200,000 cash, and issuance of 38 million Resolution shares. The minimum commitment for 2020 is US$5.0 million. Other details of the agreement between Millrock and Resolution are documented in Millrock’s announcement made December 16, 2019.

Quality Control and Quality Assurance
Millrock adheres to stringent Quality Assurance–Quality Control (“QA/QC”) standards. Drill core samples are kept in a secure location at all times. For this program representative half-core samples underwent sample preparation at ALS Chemex prep laboratory in Fairbanks, Alaska USA. Samples were subsequently analyzed at ALS Chemex laboratories in Vancouver, Canada. Gold was analyzed by Fire Assay (specifically ALS code Au-AA25 - Au by fire assay and AAS using a 30 gram nominal sample weight). Other elements (48 in total) were analyzed using ALS method code ME-MS61 which involves a four-acid "near total" digestion and an ICP-MS + ICP-AES finish. The following QA/QC protocols have been adopted for this program: 1) Duplicates were created as coarse crush duplicates on every 50th sample (2% insertion) in the sample preparation process at the laboratory, and 2) Blank material was inserted at a rate of 2 blanks per 100 samples (2% insertion) and 3) Standards–Certified Reference Material (CRM’s) every 20th sample (5% insertion) plus additional random insertions at supervising geologist’s discretion. All results from duplicates, blanks, and standards were reviewed and found to be accurate within acceptable tolerances for results obtained to date.

Qualified Person
The scientific and technical information disclosed within this document has been prepared, reviewed and approved by Gregory A. Beischer, President, CEO and a director of Millrock Resources. Mr. Beischer is a qualified person as defined in NI 43-101.

About Millrock Resources Inc.
Millrock Resources Inc. is a premier project generator to the mining industry. Millrock identifies, packages, and operates large-scale projects for joint venture, thereby exposing its shareholders to the benefits of mineral discovery without the usual financial risk taken on by most exploration companies. The company is recognized as the premier generative explorer in Alaska, holds royalty interests in British Columbia, Canada and Sonora State, Mexico and is a significant shareholder of junior explorer ArcWest Exploration Inc. Funding for drilling at Millrock’s exploration projects is primarily provided by its joint venture partners. Business partners of Millrock have included some of the leading names in the mining industry: EMX Royalty, Centerra Gold, First Quantum, Teck, Kinross, Vale, Inmet and, Altius as well as junior explorers Resolution, Riverside and PolarX.

Some statements in this news release contain forward-looking information (within the meaning of Canadian securities legislation) including, without limitation, management’s expectation that the planned drilling program will successfully be carried out. These statements address future events and conditions and, as such, involve known and unknown risks, uncertainties and other factors which may cause the actual results, performance or achievements to be materially different from any future results, performance or achievements expressed or implied by the statements. Such factors include, without limitation, Millrock’s ability to mobilize the drill rig and camp and complete the drilling work and other customary risks of the resource industry. 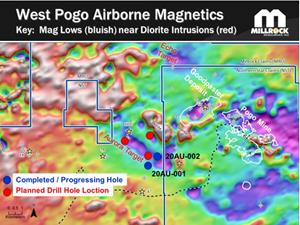 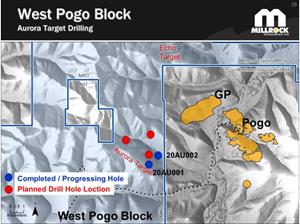 Location map showing location of the Pogo Mine gold vein outlines (orange polygons) and Goodpaster (GP) gold deposit on Northern Star’s property. Red dots indicate approximate location of holes to be drilled in Millrock’s current program. Blue dots represent holes that have been completed or are in progress.