CEO and President, Bradley Rourke , commented: "We are thrilled to complete this amalgamation with AUX, which significantly increases our land package in the Stewart area from just over 25,000 ha to now more than 50,000 ha. Bringing in the Georgia River Mine project along with the Scottie Gold Mine means we are now simultaneously pushing forward two high-grade gold past-producing mines that have been chronically underexplored. Our seasoned exploration team will use their experience advancing the Scottie Gold Mine to efficiently explore the potential expansion of what is already an incredibly gold-rich system. At Scottie, drilling on the Blueberry Zone has commenced, and additional drills will arrive onsite in the coming days to begin drilling at Georgia River and the Scottie Gold Mine."

With the newly merged property portfolio, over 16,000 m of drilling is planned for the 2021 season. The majority of the drilling is allocated for the Scottie Gold Mine Project (Blueberry, Domino, 'O' and 'M' zones), while a smaller campaign will test targets in the Georgia River Project, and within the Cambria Project.

Drilling has commenced at the Blueberry zone, testing the downward extension of the high-grade ore shoot identified during 2020. Two additional drills are expected to begin turning on the Scottie Gold Mine and Georgia River Projects over the next week. In additional to drilling, multiple geophysical surveys are planned for the season, including 2D and 3D induced polarization ("IP"), downhole electromagnetic (" DHEM "), and horizontal loop electromagnetic (" HLEM ") surveys. 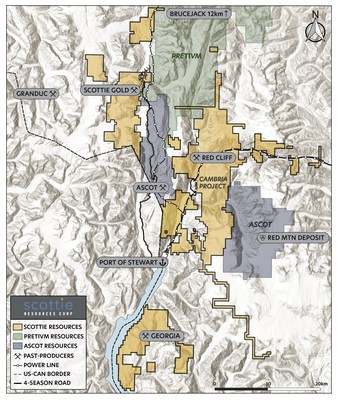 The Transaction was completed by way of a three-cornered amalgamation whereby AUX and Subco amalgamated under the Business Corporations Act ( British Columbia ) to form AUX Resources Limited, a wholly-owned subsidiary of Scottie. All of the issued and outstanding common shares of AUX (" AUX Shares ") were exchanged for common shares in the capital of Scottie (" Scottie Shares ") on a one-for-one basis. All of AUX's issued and outstanding warrants (" AUX Warrants ") and options (" AUX Options ") were exchanged for equivalent warrants (" Scottie Warrants ") and options (" Scottie Options ") of Scottie, respectively, on a one-for-one basis, and immediately cancelled.  Pursuant to the Transaction, Scottie issued:

Upon closing of the Transaction, all directors and officers of AUX resigned. Bradley Rourke , the President, CEO and a Director of Scottie, and Thomas Mumford , the VP Exploration of Scottie, will serve as directors of AUX, which will continue as a wholly-owned subsidiary of Scottie.

AUX also wishes to clarify its news release dated July 12, 2021 . AUX Resources Corporation previously announced that the AUX Shares would be delisted from the TSX Venture Exchange (the " TSXV ") effective as of close of markets on Wednesday July 15, 2021 . However, Scottie and AUX now expect delisting from the TSXV to occur on or about the close of market on Monday, July 19, 2021 . The trading of the AUX Shares was halted on Wednesday, July 15, 2021 in connection with closing of the Amalgamation.

The Scottie Shares will continue to trade on the TSX Venture Exchange under the symbol "SCOT".

A copy of the Early Warning Reports prepared in connection with the acquisition of the AUX Shares by Scottie and the Scottie Shares and Scottie Warrants held by Mr. Sprott, respectively, can be obtained on Scottie's SEDAR profile or, with respect to Scottie's Early Warning Report, by contacting Bradley Rourke, President and CEO of Scottie at (250) 877-9902 (905-1111 West Hastings Street, Suite 905, Vancouver, BC V6E 2J3) or, with respect to Mr. Sprott's Early Warning Report, or by contacting Mr. Sprott's office at (416) 945-3294 (200 Bay Street, Suite 2600, Royal Bank Plaza, South Tower, Toronto, Ontario M5J 2J1).

Scottie owns a 100% interest in the high-grade, past-producing Scottie Gold Mine and Bow properties and has the option to purchase a 100% interest in Summit Lake claims which are contiguous with the Scottie Gold Mine property. Scottie also owns 100% interest in the Georgia Project which contains the high-grade past-producing Georgia River Mine, as well as the Cambria Project properties and the Sulu property. Altogether, Scottie holds more than 52,000 ha of mineral claims in the Golden Triangle.

Scottie's focus is on expanding the known mineralization around the past-producing mine while advancing near mine high-grade gold targets, with the purpose of delivering a potential resource.

All of Scottie's properties are located in the area known as the Golden Triangle of British Columbia which is among the world's most prolific mineralized districts.