Coverage made possible by the sponsorship of our featured companies: Click here to see more about Rockridge Resources Ltd.

Significant gold mineralization was reported in 7 of the 9 holes received to-date, including highlights of:

Rockridge CEO, Grant Ewing — whom you’re about to hear more from — commented via press release:

"The main zone of the Raney gold project has returned significant high-grade gold results from previous drilling campaigns, and the current program was designed to test the depth and strike extent of the mineralization outside of this zone. A very encouraging aspect of the program is the potential extension of the Raney gold zone to the west where hole RN 20-18 intersected gold in a strongly altered section with quartz veins 250 metres west of the main zone.”

The current drilling is a follow-up to the company’s 2020 spring program which intercepted an impressive 28.0 g/t Au over 6.0 meters.

For speculators, this is true early-stage drilling in a prolific mineral belt that’s produced around 100 million gold ounces over the decades by way of numerous word-class mines — representing roughly 20% of the world’s cumulative gold production.

Keep in mind also that the current scout drilling at Raney is focused on only a small area of the known gold zone — about 225 meters of strike length — so there exists ample opportunity for the discovery of new gold zones at this relatively large, underexplored project. 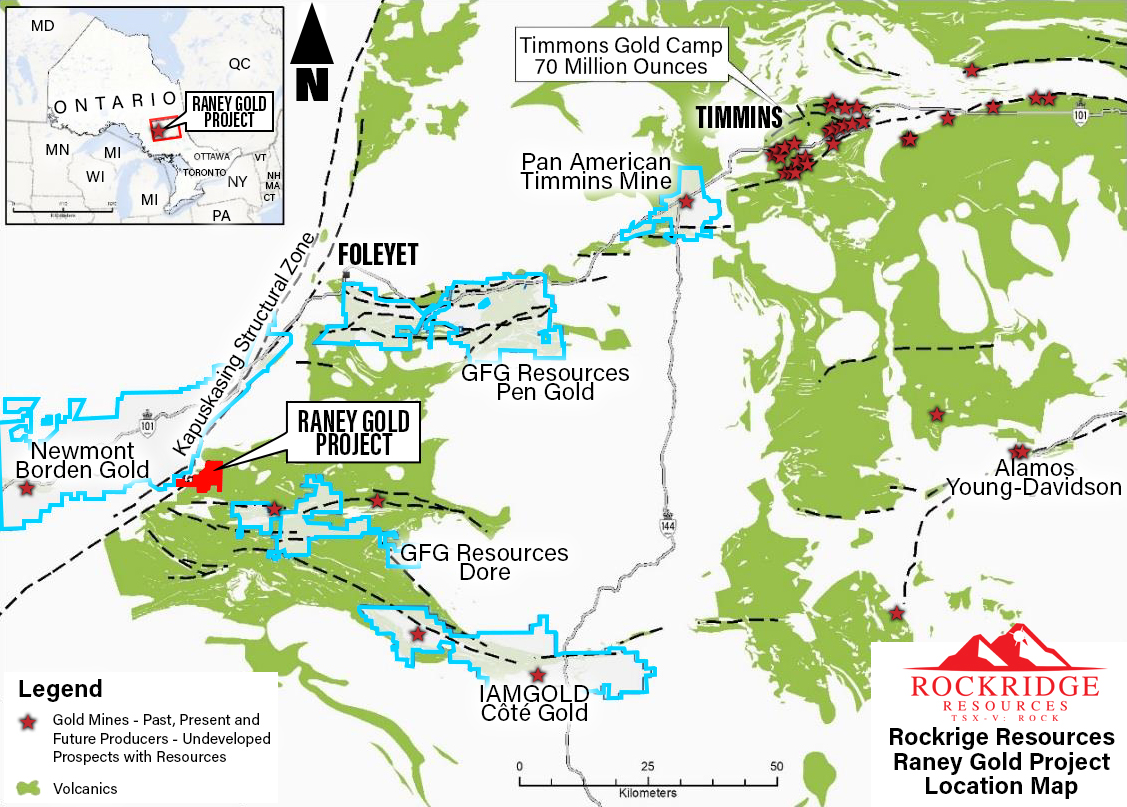 As the above map illustrates, the Raney Gold Project is situated just 22 miles east of industry leader Newmont’s Borden Gold Mine (reserves of 4.17 million tonnes at 6.38 g/t Au for about 860,000 ounces Au reported in 2015), which is now in production.

Additionally, 47 miles to the southeast of Raney, IAMGOLD and Sumitomo are joint-ventured on the ~7M oz/Au Cote Project, which received the go-ahead on construction last year.

The Rockridge team is awaiting assays from the final two holes of its recently completed program — drilled slightly further west at the Fold Nose zone — and will then utilize the full data-set in the delineation of the next set of drill targets for Raney.

Our own Gerardo Del Real of Junior Resource Monthly sat down with Rockridge CEO, Grant Ewing, to discuss the latest high-grade gold intercepts from Raney plus a look ahead to what’s next for both Raney and Knife Lake. Listen to the interview here.