Coverage made possible by the sponsorship of our featured companies: Click here to see more about Angold Resources

The company is led by president & CEO, Adrian Rothwell, who is the former director of strategy at Goldcorp (now Newmont Corp.).

With several big mines headed toward production, the Maricunga gold belt of northern Chile is reemerging as the epicenter of gold mining operations in that country buoyed by a series of newly-proposed government-sponsored tax breaks designed to attract foreign investment in its mining sector.

The region’s other major project is the Norte Abierto alliance between Barrick and Newmont which aims to combine the undeveloped Caspiche and Cerro Casale deposits into a single operation. Together they offer proven and probable reserves of 23 million ounces gold-equivalent and 5.8 billion pounds of copper. 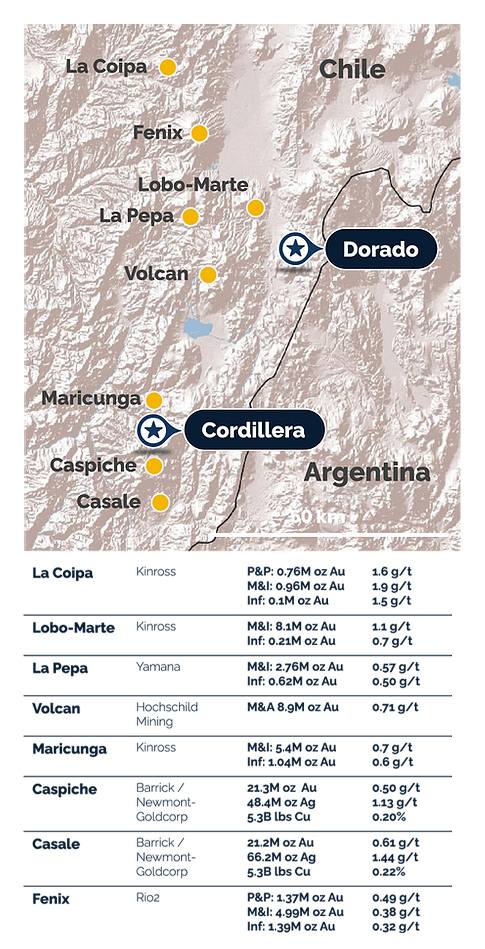 Angold’s flagship Dorado project is situated nearby to Kinross’s Lobo-Marte project — so as mining addresses go, Angold is absolutely in the heart of elephant country!

The Dorado project boasts a historical resource of about half a million gold ounces at half a gram per tonne, is open in most directions, and, up until now, has never been drilled to-depth.

Angold has commenced its initial 5,000-meter drill program at Dorado, at the Lajitas target, to identify mineralization beyond historically reported resources and to confirm historic intercepts.

Angold CEO, Adrian Rothwell, whom you’ll be hearing more from in a moment, stated via press release:

"We have put an experienced team and seed capital to work early at Dorado, beginning regional exploration and sampling programs last year. This has highlighted a larger footprint to the resource areas than previously thought and will improve the success of this preliminary 5,000 m drill program. Dorado has the potential to host multiple multi-million ounce gold deposits in a geological setting that is now better understood than when previous operators worked on the central part of the project in the 1990's and 2000's. With additional staked ground (of about 15,000 ha), local logistical and technical teams, and infrastructure at site we are able to commence drilling quickly. We look forward to an exciting 2021!"

Additionally, in March, Angold expects to have the drills turning at its other flagship, the Iron Butte project in Nevada, which has a historic resource of about 600,000 gold ounces at around 0.62 g/t gold.

So lots of news flow on the way!

Our own Gerardo Del Real of Junior Resource Monthly sat down with Angold CEO, Adrian Rothwell, to discuss the two flagships, the resources, the drilling, and the opportunity… so please enjoy the interview which you can listen to here.

You can also learn more about Angold Resources here.