GoldMining Inc. (TSX: GOLD)(NYSE-American: GLDG) — currently trading around C$1.25 per share — has released assays from the first 2 of 6 holes from its phase-one, 3,600-meter drill program at the La Mina gold-silver-copper project located in Antioquia, Colombia.

The results are from the La Garrucha target, which lies less than 1 km east of the known mineral resources on the 100%-owned project.

The results confirm the extension of porphyry mineralization at the La Garrucha target where drilling continues via 100-meter step outs.

GoldMining Inc. CEO Alastair Still — whom you’re about to hear from directly in our exclusive interview — commented via press release:

“This is a great start for our 2022 La Garrucha drilling program at the La Mina Project in Colombia and our broader strategy to unlock value from our portfolio of gold and gold-copper projects located throughout the Americas. This also builds upon the La Mina Preliminary Economic Assessment* announced earlier this year that focused on the La Cantera and Middle Zone deposits of the project which are located 1 kilometre to the west of La Garrucha. Our team believes that the La Garrucha target remains open for expansion and is shaping up as a third possible porphyry deposit which could contribute potential additional resources to lead the growth of the La Mina Project.” 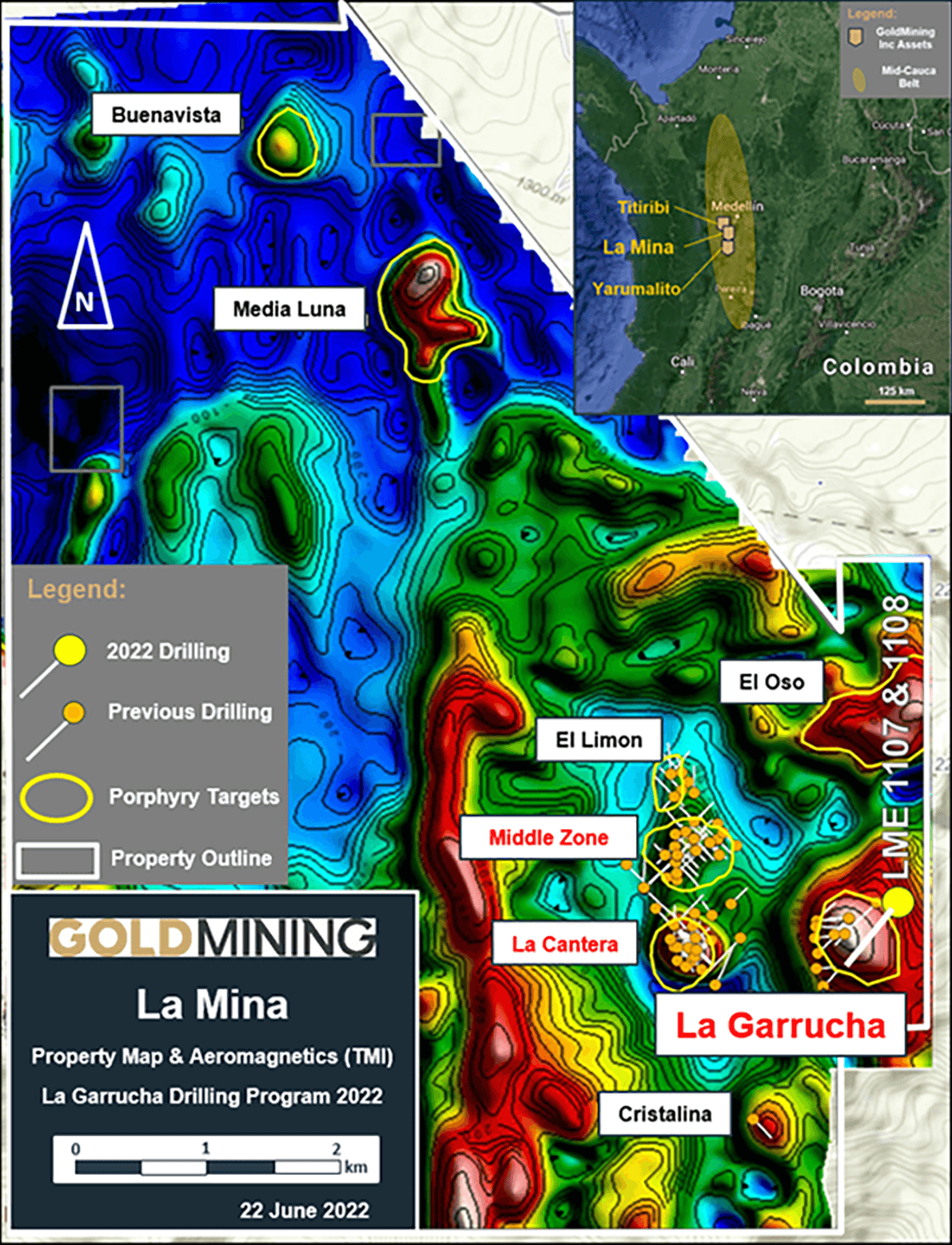 GoldMining released a first-pass PEA on the La Mina project in Q1 2022.

The report envisions an open pit mining scenario at a production rate of 102,000 gold-equivalent ounces per annum over a 10.4-year mine life — from the La Cantera and Middle Zone deposits — with potential for further advancement of the La Garrucha deposit area by way of the drill bit.

The ongoing drill program at La Garrucha has systematically extended the porphyry mineral system by some 300 meters of strike where it remains open to the southeast at roughly 200 meters in width.

Importantly, drilling to-date has tested to a vertical depth of 450 meters with mineralization remaining open at depth; the GoldMining team has every intent to go deeper at La Garrucha to see just how far the mineralization extends below surface.

So more drilling on-deck this summer, including eventual deeper drilling, plus additional assays due in the coming months with which to potentially move the needle higher.

Our own Gerardo Del Real of Junior Resource Monthly caught up with GoldMining Inc. CEO Alastair Still to go over the current drill program and next-steps for La Mina, plus a closer look at a newly-announced C$16.5 million option agreement with NevGold on the Almaden gold property, Idaho. Enjoy!