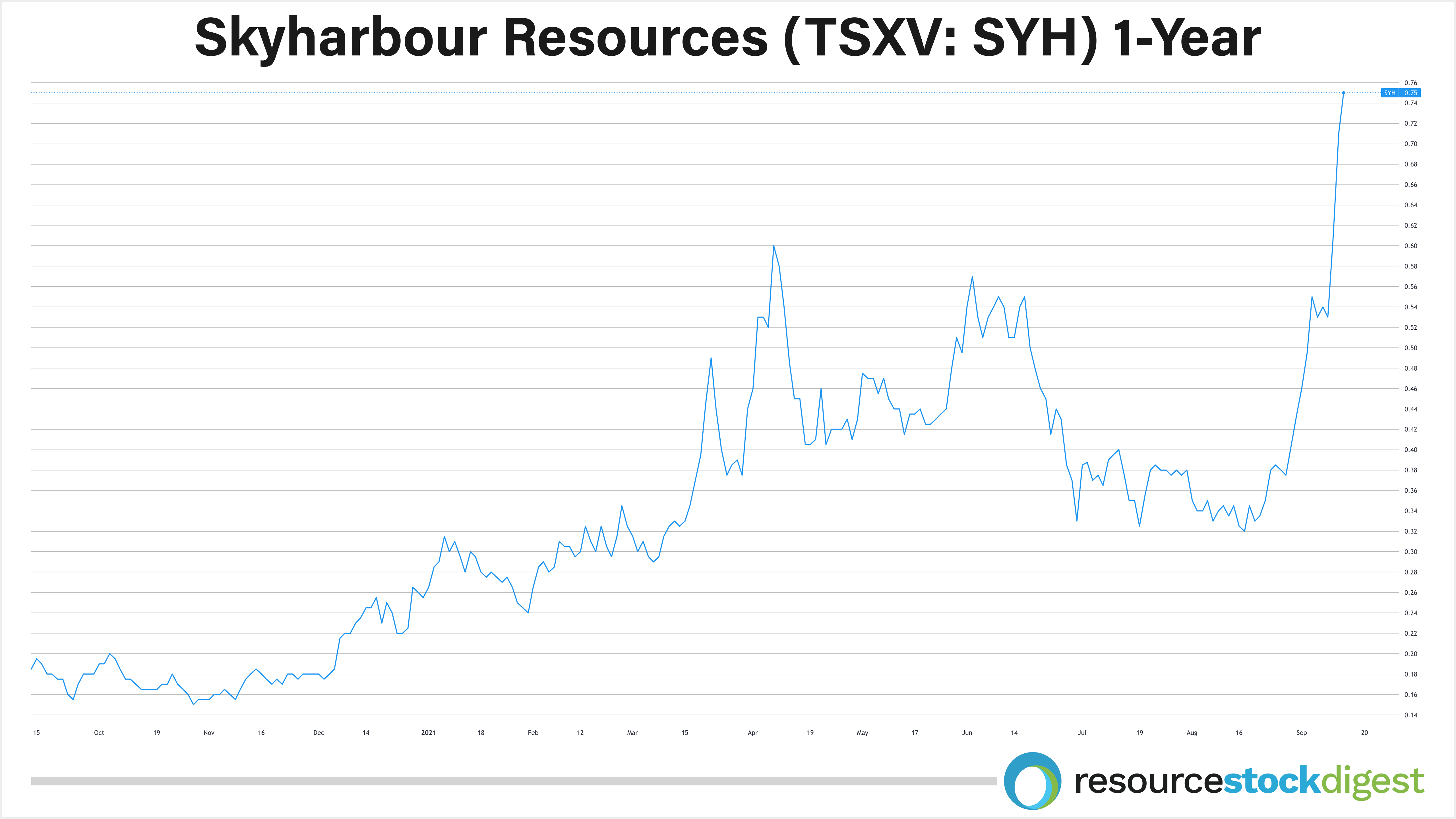 Highlights include 6.80% U3O8 over 2.0 metres — within 6.0 meters of 2.54% U3O8 — with all three holes intersecting highly prospective altered, graphitic and sulphide bearing basement lithologies.

With substantial portions of the 4.5 km-long Maverick corridor yet to be systematically drill-tested, the Skyharbour team sees robust discovery potential both along strike and at-depth in the underexplored basement rocks at Moore. And these early drill results — which include some of the highest grade intercepts to-date from the basement rocks at Maverick East — certainly support that theory.

Drilling is continuing at Moore with four to five holes planned for another 1,500 to 2,000 meters, and the company is awaiting assays on an additional seven drill holes.

Skyharbour CEO, Jordan Trimble — whom you’ll be hearing a lot more from in just a moment — commented via press release:

“We are thrilled with the first batch of drill results announced herein highlighted by drill hole ML21-03 which returned the best intercept to date in the basement rocks at the Maverick East Zone. Our geological team is continuing to explore for higher grade uranium mineralization along strike and down plunge at this zone with an expanded drill program. We are successfully increasing the size of the high grade zones at the Maverick corridor and these results illustrate the notable discovery upside potential at the Project especially in the basement rock feeder-zones which have had limited drill-testing historically. Furthermore, there is good progress being made at regional targets at Moore and we intend to follow up on other high-priority targets throughout the Project. The remaining assay results from the drill program are pending which will provide additional news flow in the months to come amidst a significant resurgence in the uranium market.”

Hence, the company is without a doubt operating in true elephant country for large-scale deposits of uranium. And as one of only a handful of North American uranium juniors with multiple drill-ready uranium projects in a Tier-1 jurisdiction, Skyharbour is well positioned for growth in today’s surging uranium bull market.

Notably, the price of uranium has been on a solid uptrend this year from the US$25 per pound level in February to right around US$44 per pound now — marking the highest level since December 2012. And that may be just the start of what’s to come for a sector that’s been long, long overdue for a sustained resurgence.

My colleague Gerardo Del Real of Junior Resource Monthly has been calling for higher uranium prices for some time, and he sat down with Skyharbour CEO, Jordan Trimble, to get his take on the recent pricing strength plus a look at the current drill program at Moore. CLICK TO PLAY Transcript is also available. Enjoy!

Also, click here for a short video clip where Mr. Del Real discusses the advantages his subscribers enjoy monthly — including specific buy-sell signals and upcoming catalysts across a variety of metals — and why he believes Q4 is shaping up to be one of the most profitable quarters he’s seen in the junior resource space.

Click here for our feature report on Skyharbour Resources.