Visible Gold Encountered in Maiden Drill Program Down Under

E79 Resources (CSE: ESNR) — currently trading around C$0.30 per share — has announced the intersection of visible gold at its maiden drill program at its 100%-owned Myrtleford Gold Project in Victorian Goldfields, Australia.

The 1,000 meter program, which we’ve been keeping you updated on, is being deployed to test for down-dip extensions [below the water table] of previously mined high-grade quartz vein structures at the Happy Valley gold mine target and to generate a better structural understanding of the mineralized system at Myrtleford.

The first of two reported on holes was abandoned at ~60 meters depth due to being slightly off on the preferred angle for intersecting the targeted structures.

The second hole — which reached its target depth of ~350 meters and is en-route to the lab for assaying — returned visible gold associated with quartz veining in two separate zones. 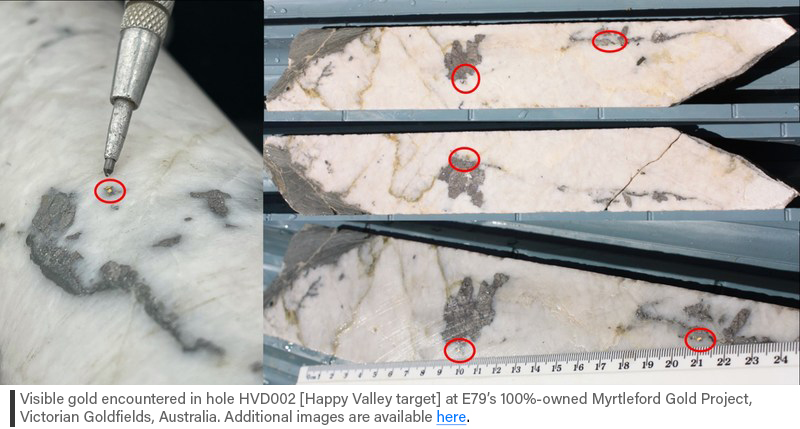 E79 CEO, Rory Quinn — whom you’ll be hearing more from in just a second — stated via press release:

"This is a superb start to the program and confirms the Company's belief in the potential of the Happy Valley target. Rarely does the discovery of visible gold occur at the start of a program. Its presence gives us confidence to continue to target down dip and along strike extensions of known mineralization. As soon as assays have been received, we will update the market further."

The 400 sq km Myrtleford property boasts more than 70 past-producing gold mines, nearly all of which ceased production activities at the intersection of the water table.

Hence, this is the first-ever drill program to be deployed at Myrtleford with the specific aim of testing for down-depth extensions of the known mineralized structures. And hitting visible gold in two separate zones within the first two holes drilled represents a very encouraging starting point for the E79 field team.

Additionally in the Victorian Goldfields, exploration is underway at the company’s 100%-owned Beaufort Gold Project where the goal is to uncover a hard-rock source of a major alluvial goldfield boasting historic production of over 1 million gold ounces.

The E79 team plans to pivot over to Beaufort once the current drill and surface sampling program is completed at Myrtleford.

Our own Gerardo Del Real of Junior Resource Monthly sat down with E79 CEO, Rory Quinn, to get his take on the visible gold intercepts from Myrtleford along with an update on the company’s forthcoming US-OTC listing. You can listen in to that discussion here (a transcript is also available).