Vox Royalty Corp. (TSX-V: VOX)(OTC: VOXCF) — currently trading around C$3.50 per share — is a relatively newly-listed precious and base metals royalty and streaming company with a portfolio of over 50 royalties and streams spanning 8 jurisdictions primarily in Australia, Canada, and the United States.

Founded in 2014, and publicly traded since May of last year, Toronto-based Vox Royalty represents an early-stage opportunity to participate in the fastest-growing junior royalty company in the space.

In fact, just since 2019, Vox has conducted an impressive 20+ transactions to acquire over 45 royalties and is now the second-largest holder of Australian mining royalties behind NYSE-listed Franco-Nevada.

In addition to precious metals — which represent ~70% of the company’s current royalty base — Vox offers exposure to a diverse set of underlying assets including base metals and even diamonds.

Yet, what truly sets Vox apart from its peers is its rapidly expanding portfolio of producing assets. The company went public a year-and-a-half ago with just one producing asset. Today, that count extends to 5 producing assets with expectations of a minimum of 10 by the end of 2023.

For those new to the royalty and streaming subsector, a royalty is essentially a contract that gives the owner — or a royalty company such as Vox —  the right to a percentage of production revenue from a mineral producer in exchange for an upfront payment.

Royalty companies like Vox use these contracts as a way to finance mining companies in need of capital. This alternative form of mine financing is often more attractive to the developer/producer than traditional debt or equity financings.

Royalty companies also purchase pre-existing royalties as a way to build a diversified portfolio of royalty assets. Since royalties typically cover the life of a mine, the royalty owner benefits from any exploration upside that may extend mine life, thus, resulting in increased production revenue at zero additional cost.

As described above, a royalty is when a mining company agrees to pay a certain part of its production revenue to the royalty owner.

A stream is when the mining company actually sells physical metal to the holder of the streaming agreement. The price per ounce is either a set price [at a much lower rate than spot] or a percentage of the spot price. The royalty-streaming company then generates revenue by selling the physical metal for a profit at current market prices.

The royalty-streaming model presents a number of key advantages over traditional mineral exploration including:

As an example, when looking at the Vox royalty portfolio and the underlying properties, it’s important to understand that well over 100,000 meters of combined drilling takes place annually across those properties for which Vox incurs zero additional costs.

That’s a ton of exploration/drilling that can lead to significant resource expansion as well as new discoveries that, in turn, can increase the value and/or duration of a royalty or stream… not to mention the fact that such benefits are oftentimes further magnified by relative pricing strength in the underlying commodities.

Vox Royalty is well-structured with only 39.5 million shares outstanding and is well-capitalized with approximately C$9 million in working capital. The company’s shares have been trending upward of late, rising from the C$2.60 level in late August to currently around C$3.50/share. 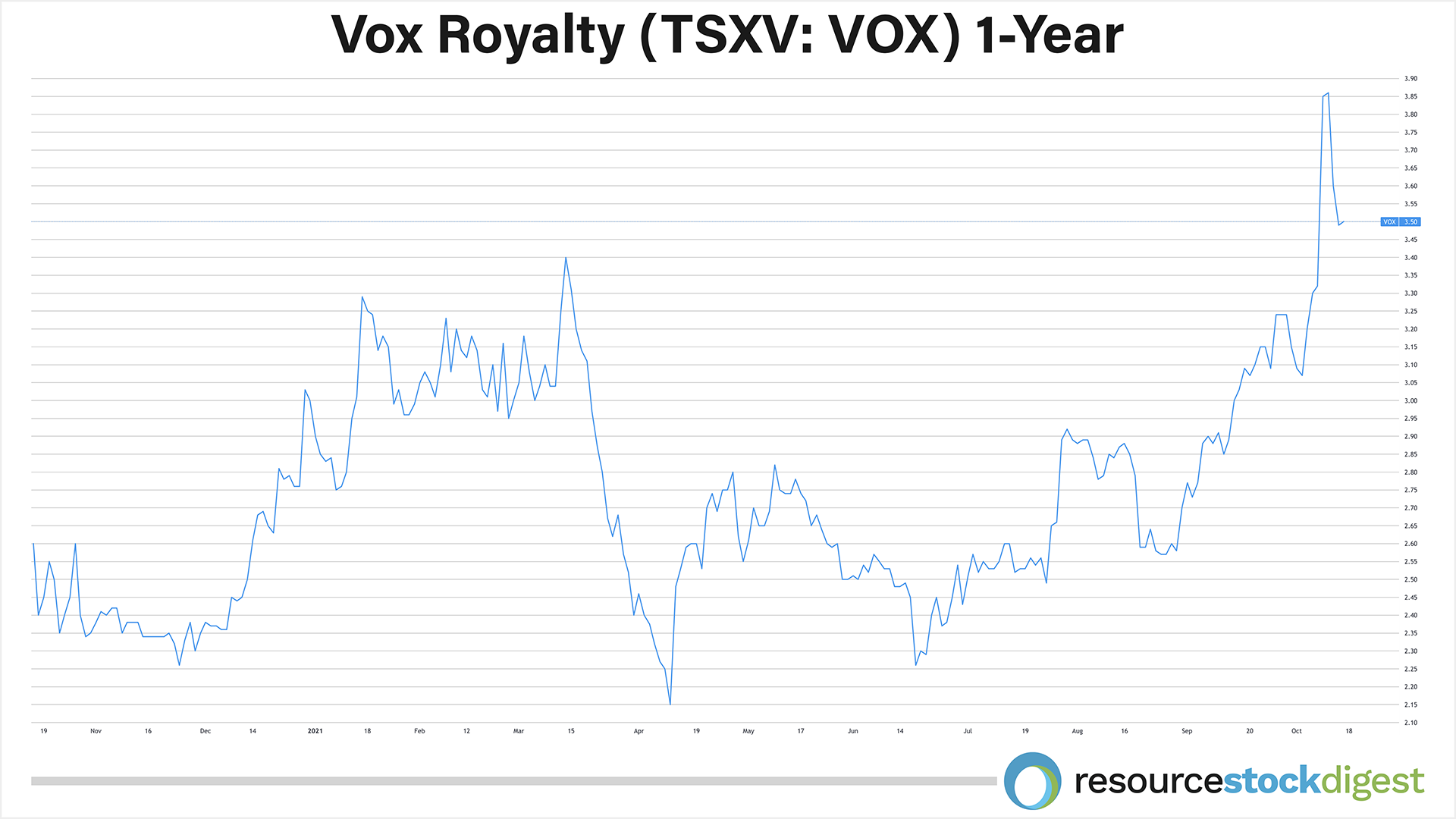 Our own Gerardo Del Real of Junior Resource Monthly sat down with Vox founder & CEO, Kyle Floyd, for an in-depth discussion on the company’s unwavering focus on building shareholder value through accretive royalty/streaming acquisitions primarily in Tier-1 mining jurisdictions.

Veering just slightly off-topic — but an important one to be sure — we’re seeing a very significant rise in the price of uranium and select uranium equities… especially on the junior exploration side.

Be sure to check out this newly released video from Junior Resource Monthly's publisher Nick Hodge.  And because most people don’t understand this metal — outside the few facts they may remember from science class about it powering nuclear power plants… He wants to show you why it provides us with an incredible profit opportunity.

Click here or on the video below to see more details on this red-hot market!

You can also learn more about Vox Royalty at their corporate website.