Coverage made possible by the sponsorship of our featured companies: Click here to see more about Aguila Copper Corp.

Aguila is focused on copper and precious metal exploration and development within the major mining belts of the Western USA. The Company targets under-explored districts where post-mineralization cover masks areas of high geological prospectivity in the vicinity of major mines.

The Cora project lies 75km NNE of Tucson, within the heart of the southern Arizona copper belt. The project is 100% owned by Aguila, secured by 46 granted BLM lode mining claims covering a total of 3.84 sq km. Many of North America's largest copper mines and development projects lie within 100km of Cora, including Ray, Miami, Resolution, Florence and Silver Bell (see Figure 1). Drilling at Cora was last recorded over 40 years ago, when significant widths of oxidized copper were intersected beneath shallow alluvial cover over an area exceeding 1 square kilometer.

Drilling results are historical in nature and have not been verified by a "qualified person" as defined by National Instrument 43-101. Drill locations are determined from maps with local grid coordinates of the day which cannot converted to modern coordinates with a high degree of accuracy. Results therefore should not be relied upon and should only be considered an indication of the mineral potential of the project.

* The location of DH1 is inconsistently recorded, placing it within or immediately adjacent to Aguila claims. Results therefore should not be relied upon and should only be considered an indication of the mineral potential of the project.

"The newly staked Cora project represents an exciting first step for Aguila into copper exploration in the Western US," commented Mark Saxon, President & CEO of Aguila American Gold Limited. "We have been progressively and patiently assessing projects, and Cora stands out as a significant copper prospect in one of the world's premier copper producing regions. The timing could not be better, as secure global copper supplies are tightening, coinciding with strong demand growth as a result of a global infrastructure, electrification and renewable energy boom. We look forward to applying modern exploration techniques to this under explored district."

The Cora copper project is located in Pinal County, Arizona, approximately 20km southwest of Florence and 75 km NNW of Tucson. Pinal County is a prolific copper producing region and is host to several large, world class copper mines and deposits including Ray, San Manuel, Silver Bell, Mission, Resolution and Miami (1.6 Bt @ 0.63% Cu). The project is accessible by Interstate 10 to the West and highway 79 to the East with power and railway access nearby. 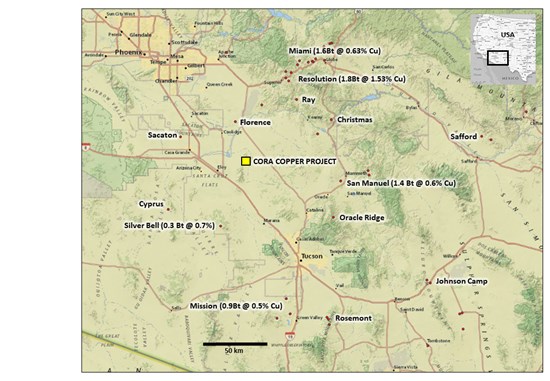 The claims held by Aguila cover the flat lying pediment to the east of and adjoining the historic North Star copper mine. Widely spaced scout drilling during the 1950's within the area secured by Aguila is reported to have intersected significant widths of oxide copper mineralization beneath shallow cover (11m to 70m). Mineralization was encountered across an area of approximately 1km by 1km.

Past exploration was predominantly focused on the fault-hosted North Star copper mine. Drilling identified a significant zone of structurally controlled copper oxide mineralization that extends below cover into the ground held by Aguila. Early explorers interpreted mineralization to be associated within detachment faults, however, a review of all available historical data by Aguila indicates a possible porphyry copper-molybdenum association.

Porphyry copper systems within Arizona are often subjected to significant post-mineral faulting and dismembering with characteristic re-mobilization of copper fluids along post-mineral faults. In this context, the structurally controlled North Star mine adjacent to the widespread copper oxide mineralization and altered intrusive rocks of the Cora project are suggestive of a shallow buried porphyry copper target. 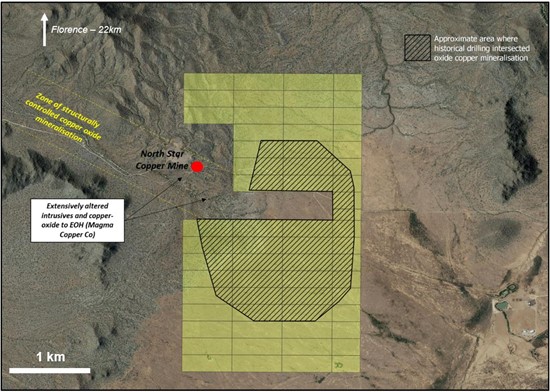 To view an enhanced version of this graphic, please visit:
https://orders.newsfilecorp.com/files/7326/90276_florencemap.jpg

The Company has obtained historic exploration data for this press release from the Geological Survey of Arizona. Although historic exploration data was generated by reputable companies applying practice of the day, Aguila cannot verify the data or determine the quality assurance and quality control measures applied in generating the data. Furthermore, there is no guarantee that the exploration history is fully captured. Additional drilling may have been undertaken, however the Company has not been made aware of or obtained additional data. Accordingly, the Company cautions that the exploration data reported in this news release may not be reliable. Readers are cautioned that a "qualified person" as defined by National Instrument 43-101 has not completed sufficient work to be able to verify the historical information, and therefore the information should not be relied upon.

ON BEHALF OF THE BOARD,

To view the source version of this press release, please visit https://www.newsfilecorp.com/release/90276