Coverage made possible by the sponsorship of our featured companies: Click here to see more about Alianza Minerals Ltd.

Vancouver, BC – TheNewswire - December 1, 2021 - Alianza Minerals Ltd. (“Alianza” or the “Company” ) ( TSXV:ANZ ) ( OTC:TARSF ) (“ Alianza” or the “Company” ) and Cloudbreak Discovery PLC (“Cloudbreak”) (LSE: CDL) (the “Alliance”) are pleased to announce the results from a surface sampling program at the Klondike Property, the first project acquired under the newly formed Strategic Alliance. The Klondike Property (“Klondike”), located in Colorado, United States, consists of 76 unpatented mining claims, a State of Colorado Exploration Permit and an exclusive right to a State lease.

A reconnaissance program consisting of mapping, stream sediment sampling and rock sampling was undertaken at Klondike to help define drill targets at the West Graben Fault and East Graben Fault targets. Rock sampling and mapping successfully expanded the footprint of both targets and identified a new target named the Northeast Fault. Sampling at the Northeast Fault returned 1.56% copper and 1.4 grams per tonne (“g/t”) silver over a 4.6 metre chip sample of bleached, bitumen spotted and altered Jurassic sandstones of the Saltwash member of the Morrison Formation.

Copper mineralized sandstones at the Northeast Fault target can be traced along the fault and outboard from it into the adjacent sandstones over an area 200 metres long by 100 metres wide before becoming obscured beneath gravel cover. Further anomalous copper, including 2.1 metres of 463 ppm copper, was encountered over one kilometre to the northwest where the structure and host strata next appear from beneath the same gravel cover.

Jason Weber, President and CEO of Alianza Minerals, stated: “We are extremely excited by the delineation of the new Northeast Fault Target at Klondike. The size of the target, strength of the copper mineralization and enticing possibility that it persists under gravel cover make it an important, high priority drill target at Klondike.”

Kyler Hardy, President and CEO of Cloudbreak, reflected on Klondike, commented: “We are in a great position at Klondike having defined three high priority areas at the West Graben, East Graben and Northeast Fault targets. Each target has demonstrated anomalous copper mineralization over two kilometres of strike length and up to 200 metres outboard from the faults themselves. We look forward to being able to drill test these areas.”

About the Klondike Project

The Klondike project is located approximately 25 kilometres south of Naturita, Colorado. This property lies within the Paradox Copper Belt, which includes the producing Lisbon Valley Mining Complex. Numerous historical copper occurrences have been identified throughout the district, however, many of these have not been explored using modern exploration techniques.

At Klondike, documented copper exploration ceased in the 1960s with subsequent exploration targeting uranium the 1970s. Previous workers reported high-grade copper mineralization highlighted by results of 6.3% copper and 23.3 g/t silver in outcrop. In addition to its high-grade potential, disseminated copper-silver mineralization has been observed which may be amenable to modern open pit mining with Solvent Extraction Electro Winning (“SXEW”) processing similar to the Lisbon Valley Mining Complex. Sedimentary hosted copper deposits are an important contributor to world copper production, accounting for more than 20% of the world’s copper supply annually. 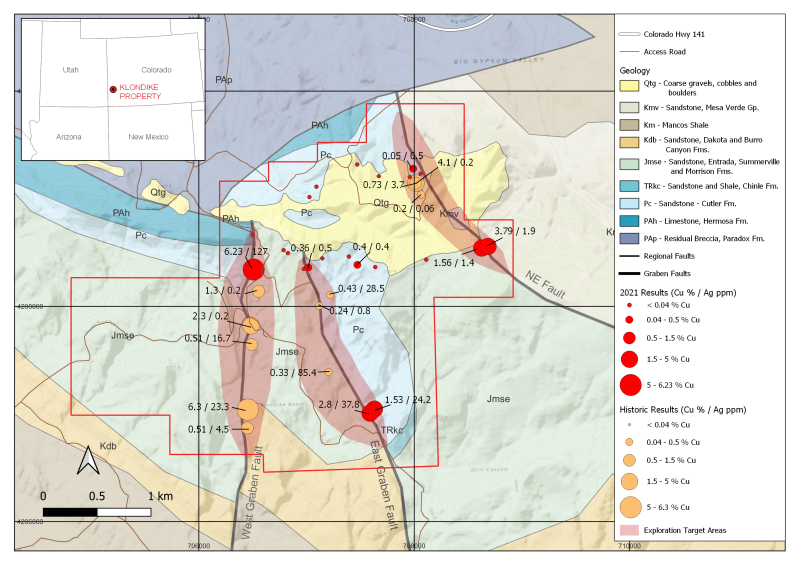 Of the samples reported from a limited historical prospecting and mapping program, 11 out of 15 returned assays ranging from 0.12 to 6.3% copper and below detection to 85.4 g/t silver. Additionally, disseminated copper-silver mineralization has also been identified in outcropping sandstones of Jurassic and Permian age. Sampling completed during the current program further defined copper silver mineralization along the West and East Graben Fault targets including: 2.80% copper and 37.8 g/t silver, 1.53% copper and 24.2 g/t silver and 6.23% copper and 127 g/t silver.

The project is road accessible year-round, traveling two kilometres of gravel road from paved highway. The project is comprised of 76 mining claims on Federal mineral rights managed by the BLM, in addition to an Exploration Permit and an exclusive right to a State lease from the State of Colorado.

About the Strategic Alliance

Under the terms of the Alliance, either Cloudbreak Discovery Plc or Alianza Minerals Ltd can introduce projects to the Strategic Alliance. Projects accepted into the alliance will be held 50/50 but funding of the initial acquisition and any preliminary work programs will be funded 40% by the introducing partner and 60% by the other party. Project expenditures are determined by committee, consisting of two senior management personnel from each party. Alianza is the operator of alliance projects unless the Alliance steering committee determines, on a case-by-case basis, that Cloudbreak would be a more suitable operator. The initial term of the Alliance runs for two years and may be extended for an additional two years.

Alianza employs a hybrid business model of joint venture funding and self-funded projects to maximize opportunity for exploration success. The Company currently has gold, silver and base metal projects in Yukon Territory, British Columbia, Colorado, Nevada and Peru. Alianza currently has one project (Tim, Yukon Territory) optioned out to Coeur Mining, Inc., a copper exploration alliance in the southwestern United States with Cloudbreak Discovery PLC and is actively seeking partners on other projects.

Mr. Jason Weber, P.Geo., President and CEO of Alianza Minerals Ltd. is a Qualified Person as defined by National Instrument 43-101. Mr. Weber supervised the preparation of the technical information contained in this release.