Coverage made possible by the sponsorship of our featured companies: Click here to see more about ALX Resources Corp.

Vancouver, British Columbia--(Newsfile Corp. - October 26, 2021) - ALX Resources Corp. (TSXV: AL) (FSE: 6LLN) (OTC: ALXEF) ("ALX" or the "Company") is pleased to announce that it has commenced a helicopter-supported ground prospecting program at the Javelin and McKenzie Lake Uranium Projects ("Javelin", or the "Project") in northern Saskatchewan, Canada. Javelin and McKenzie Lake are located near the eastern margin of the Athabasca Basin within 65 kilometres (40 miles) southeast of the McArthur River Uranium Mine. The ground prospecting program is targeting radioactive anomalies identified from a high-resolution airborne radiometric and magnetic survey just completed on ALX's claims.

Javelin and McKenzie were each acquired during a recent staking rush that began in mid-September 2021, both by staking and by acquisition from an arm's-length vendor. Recent exploration in the region has produced multiple new uranium discoveries - by Valor Resources Limited, by 92 Energy Ltd. and by Baseload Energy Corp. Each of these discoveries appear structurally controlled within basement rocks, which lie just outside the mapped boundary of the Athabasca Basin sandstone. 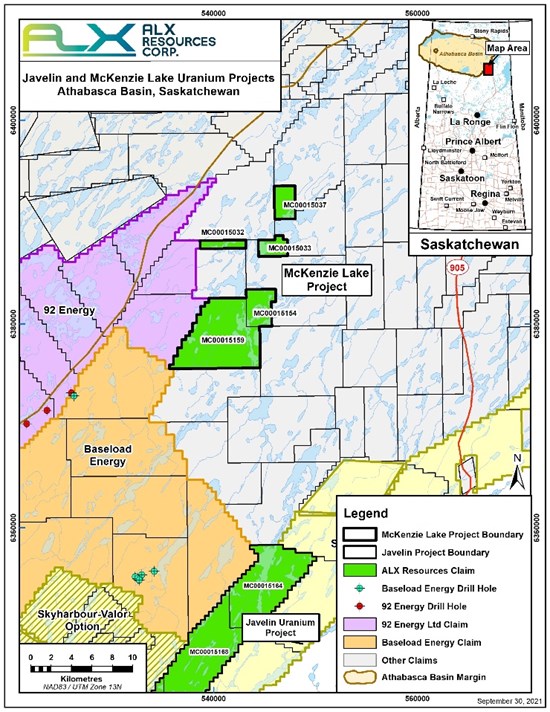 During September and October, ALX contracted Special Projects Inc. ("SPI") of Calgary, Alberta to fly both the Javelin and McKenzie Lake projects with its proprietary radiometric system, which was instrumental in locating buried radioactive boulders that led to the discovery of the Triple R Uranium Deposit in 2012. SPI surveyed ALX's claims on 50-metre and 100-metre line spacings for total coverage of approximately 306 square kilometres (118 square miles).

Weather permitting, the current field work will consist of reconnaissance-scale prospecting of areas identified by SPI as having elevated radioactivity. In addition, prominent structural features with corresponding anomalous radioactivity and historical mineral showings will be examined.

The technical information in this news release has been reviewed and approved by Jody Dahrouge, P.Geo., a Director of ALX, who is a Qualified Person in accordance with the Canadian regulatory requirements set out in National Instrument 43-101. Management cautions that historical results or discoveries on adjacent or nearby mineral properties are not necessarily indicative of the results that may be achieved on ALX's mineral properties.

ALX's mandate is to provide shareholders with multiple opportunities for discovery by exploring a portfolio of prospective mineral properties, which include uranium, nickel-copper-cobalt and gold projects. The Company uses the latest exploration technologies and holds interests in over 250,000 hectares of prospective lands in Saskatchewan, a stable Canadian jurisdiction that hosts the highest-grade uranium mines in the world, a producing gold mine, and production from base metals mines, both current and historical.

ALX also owns 100% interests in the Firebird Nickel Project (now under option to Rio Tinto Exploration Canada Inc., who can earn up to an 80% interest), the Flying Vee Nickel/Gold and Sceptre Gold projects, and can earn up to an 80% interest in the Alligator Lake Gold Project, all located in northern Saskatchewan, Canada. ALX owns, or can earn, up to 100% interests in the Electra Nickel Project and the Cannon Copper Project located in historic mining districts of Ontario, Canada, the Vixen Gold Project (now under option to First Mining Gold Corp., who can earn up to a 100% interest in two stages), and in the Draco VMS Project in Norway.

For more information about the Company, please visit the ALX corporate website at www.alxresources.com or contact Roger Leschuk, Manager, Corporate Communications at: PH: 604.629.0293 or Toll-Free: 866.629.8368, or by email: rleschuk@alxresources.com

On Behalf of the Board of Directors of ALX Resources Corp.

To view the source version of this press release, please visit https://www.newsfilecorp.com/release/100831