Each Unit consists of one common share in the capital of the Company (each, a "Share") and one-half of one common share purchase warrant (each whole warrant, a "Warrant"). Each Warrant entitles the holder to purchase one additional Share at a price of $0.20 per Share for a period of two years from closing of the Private Placement. The Company may accelerate the expiry of the Warrants in the event that for any ten consecutive trading days the closing price of the Shares is greater than $0.30.

David Kelley, President and CEO, commented, "We are excited to be fully financed as we execute an aggressive exploration drilling campaign that began June 15, 2022. This is a bold step-out exploration program applying what we have learned in the last 4 years and utilizing the expertise and support from the Gold Fields exploration team. We have updated our target ranking criteria to include the potential to discover larger tonnage deposits. In addition to high-grade mineralization hosted in tourmaline breccia pipes, we will also be testing targets related to the potential coalescence of breccia pipes (mega-breccias), epithermal mineralization in zones of pervasive argillic alteration, and mineralization related to a rhyodacite dome. We believe these mineralization styles are all part of the same Soledad mineral system that occupies a 12 km2 footprint."

The Company intends to use the net proceeds of the Private Placement for exploration and development of the Company's high-grade copper-gold-silver discovery at the Soledad Project, located in the Ancash region of Peru, and for ESG programs, general working capital and administrative purposes. On January 11, 2022, the Company announced an initial inferred resource hosting 191,000 ounces of gold, 11.7 million ounces of silver, and 130 million pounds of copper in seven tourmaline breccia pipes.

All securities issued under the Private Placement are subject to a four-month hold period expiring on October 22, 2022 in accordance with applicable Canadian securities laws, in addition to such other restrictions as may apply under applicable securities laws in jurisdictions outside of Canada. Final closing of the Private Placement is subject to all necessary regulatory approvals, including the approval of the TSX Venture Exchange.

The common shares have not been registered under the United States Securities Act of 1933, as amended, and may not be offered or sold in the United States absent registration or an applicable exemption from registration requirements. This news release does not constitute an offer to sell or a solicitation of an offer to buy such securities in any jurisdiction in which such an offer or sale would be unlawful.

Corporate Update
Pursuant to the extension agreement and revised payment terms for the Company's purchase option agreement with Condor Resources, the Company has elected to proceed with the second option which requires cash and share payments to be made over a three-year period, as described in more detail in the Company's news release dated April 18, 2022. Accordingly, the Company will pay Condor US$800,000 and issue 1,379,310 shares prior to June 23, 2022.

Exploration Update
The company initiated a step-out exploration drilling campaign on June 15, 2022 to test thirteen new targets not previously drilled on the north side of the project. The campaign is initially planned with one drill rig for approximately 3,000m of core drilling with one or two holes in each target. Once these targets have been drilled, a decision will be made regarding both additional target testing and follow-up drilling. These thirteen targets were selected from a total of 154 targets identified on the project that were prioritized during an in-house technical workshop incorporating recently acquired Offset IP survey results. The principal target areas for this round of drilling on the north side of the project are 1) Cima Blanca (in-progress), 2) Bx 4 cluster, 3) Faro, 4) Western Breccias, 5) Paloma Trend, and 6) Paloma-Huancarama megabreccia target (Figure 1). Numerous additional high priority targets exist on the south side of the project that will be drill tested once a drill permit is awarded for this area.

About Chakana Copper Corp
Chakana Copper Corp is a Canadian-based minerals exploration company that is currently advancing the Soledad Project located in the Ancash region of Peru, a highly favorable mining jurisdiction with supportive communities. The Soledad Project is notable for the high-grade copper-gold-silver mineralization that is hosted in tourmaline breccia pipes. An initial inferred resource estimate for seven breccia pipes was announced in Q1 2022 (see news release dated February 23, 2022), with 6.73 Mt containing 191,000 ounces of gold, 11.7 million ounces of silver, and 130 million pounds of copper. In addition, extensive multidisciplinary exploration has defined 154 exploration targets, 18 of which have been tested to date (12%), confirming that Soledad is a large, well-endowed mineral system with strong exploration upside. Chakana's investors are uniquely positioned as the Soledad Project provides exposure to copper and precious metals. For more information on the Soledad project, please visit the website at www.chakanacopper.com.

Results of an initial resource estimate and additional information concerning the Project, including a technical report prepared in accordance with National Instrument 43-101, are available on Chakana's profile at www.sedar.com.

Neither TSX Venture Exchange nor its Regulation Services Provider (as that term is defined in the policies of the Exchange) accepts responsibility for the adequacy or accuracy of this release.

NOT FOR DISTRIBUTION TO U.S. NEWS WIRE SERVICES
OR DISSEMINATION IN THE UNITED STATES 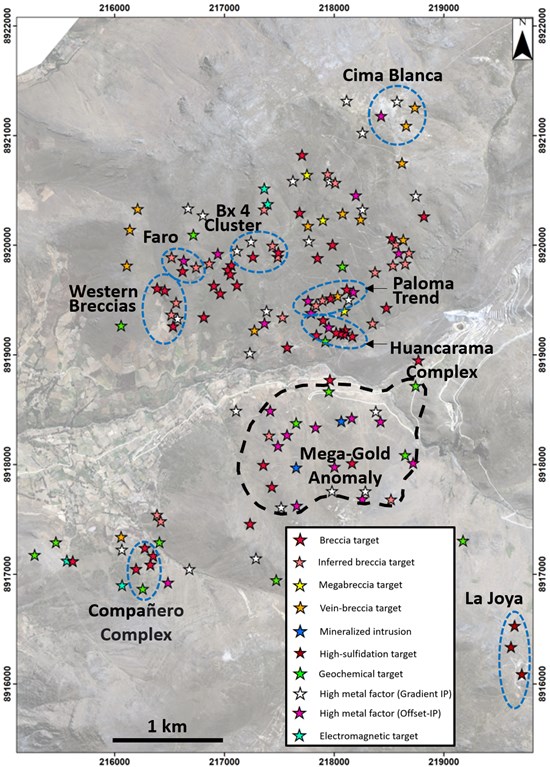 Figure 1 - Map showing total defined targets for the Soledad project by type. Principal target clusters on the north side of the project being tested in the current exploration drilling program are Cima Blanca, Bx 4, Faro, Western Breccias, Paloma-Huancarama trends. Target clusters on the south side will be drill tested once the drill permit is approved for this area.

To view the source version of this press release, please visit https://www.newsfilecorp.com/release/128570