VANCOUVER, BC , Sept. 21, 2021 /PRNewswire/ - Defense Metals Corp. (" Defense Metals " or the " Company ") (TSXV: DEFN) (OTCQB: DFMTF) (FSE: 35D) is pleased to provide an update with respect to its ongoing Wicheeda Rare Earth Element (REE) deposit resource expansion and delineation diamond drill program. The first drill hole of the 2021 campaign testing the North Zone of the Wicheeda REE Deposit has intersected a 215-metre core interval of visually REE mineralized carbonatite, the longest carbonatite interval ever drilled on the Project (Figure 1). The program is progressing on schedule and is currently on the 4 th drill hole, with over 750 metres drilled to date. 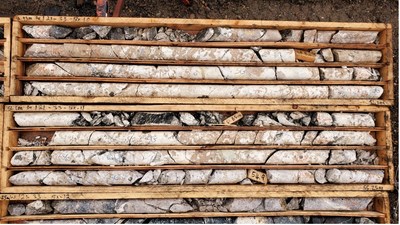 Drill hole WI21-33 (350az/-80 o ) was designed to test the North Zone of the Wicheeda REE Deposit, which remains open to expansion, and collared into visually REE mineralized carbonatite, and remained in carbonatite to a depth of 220 metres downhole. Significantly the intercept extends 120 metres vertically below the bottom of nearest mineralized drill hole (WI19-32) and 70 metres and below the base of the current resource pit shell, reinforcing that the north end of the Wicheeda REE Deposit is open to expansion (Figure 2).

The 2021 Wicheeda diamond drill program is designed to build on the successes of the 2019 campaign in support of future advanced economic studies. The 2021 drill program will focus on expanding the zone REE mineralized dolomite-carbonatite to the north, in addition to further delineating existing inferred resources within the central and northwestern areas of the deposit

Craig Taylor , CEO of Defense Metals, stated: "Defense Metals is extremely pleased to not only be making steady progress in completing our 2021 resource expansion and delineation drill program, but to have out first hole exceed our expectation in terms of visual indications of REE mineralization and being the longest carbonatite interval drilled to date on the Project. This reaffirms our believe in the significant expansion potential of the Wicheeda REE Deposit."

About the Wicheeda REE Property

The 1,708 hectare Wicheeda REE Property, located approximately 80 km northeast of the city of Prince George, British Columbia , is readily accessible by all-weather gravel roads and is nearby to infrastructure, including power transmission lines, the CN railway and major highways.

Geologically, the property is situated in the Foreland Belt and within the Rocky Mountain Trench, a major continental geologic feature. The Foreland Belt contains part of a large alkaline igneous province, stretching from the Canadian Cordillera to the southwestern United States , which includes several carbonatite and alkaline intrusive complexes hosting the Aley (niobium), Rock Canyon (REE), and Wicheeda (REE) deposits.

The scientific and technical information contained in this news release as it relates to the Wicheeda REE Property has been reviewed and approved by Kristopher J. Raffle, P.Geo. (BC) Principal and Consultant of APEX Geoscience Ltd. of Edmonton, AB , a director of Defense Metals and a "Qualified Person" as defined in National Instrument 43-101 – Standards of Disclosure for Mineral Projects . Mr. Raffle verified the data disclosed which includes a review of the analytical and test data underlying the information and opinions contained therein. 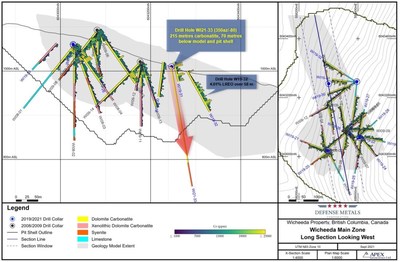 Defense Metals Corp. is a mineral exploration company focused on the acquisition of mineral deposits containing metals and elements commonly used in the electric power market, military, national security and the production of "GREEN" energy technologies, such as, high strength alloys and rare earth magnets. Defense Metals has an option to acquire 100% of the 1,708 hectare Wicheeda Rare Earth Element Property located near Prince George, British Columbia , Canada. Defense Metals Corp. trades in Canada under the symbol "DEFN" on the TSX Venture Exchange, in the United States , under "DFMTF" on the OTCQB and in Germany on the Frankfurt Exchange under "35D".

This news release contains "forward–looking information or statements" within the meaning of applicable securities laws, which may include, without limitation, statements relating to the ongoing optimization test work and the expected outcomes, operation of a future hydrometallurgical pilot plant, plans for its Wicheeda Property, the advancement and development of the Wicheeda Property, the technical, financial and business prospects of the Company, its project and other matters. All statements in this news release, other than statements of historical facts, that address events or developments that the Company expects to occur, are forward-looking statements. Although the Company believes the expectations expressed in such forward-looking statements are based on reasonable assumptions, such statements are not guarantees of future performance and actual results may differ materially from those in the forward-looking statements. Such statements and information are based on numerous assumptions regarding present and future business strategies and the environment in which the Company will operate in the future, including the price of rare earth elements, the ability to achieve its goals, that general business and economic conditions will not change in a material adverse manner, that financing will be available if and when needed and on reasonable terms. Such forward-looking information reflects the Company's views with respect to future events and is subject to risks, uncertainties and assumptions, including those filed under the Company's profile on SEDAR at www.sedar.com . While such estimates and assumptions are considered reasonable by the management of the Company, they are inherently subject to significant business, economic, competitive and regulatory uncertainties and risks. Factors that could cause actual results to differ materially from those in forward looking statements include, but are not limited to, continued availability of capital and financing and general economic, market or business conditions, adverse weather conditions, failure to maintain or obtain all necessary government permits, approvals and authorizations, failure to maintain community acceptance (including First Nations), decrease in the price of rare earth elements, the impact of Covid-19 or other viruses and diseases on the Company's ability to operate, increase in costs, litigation, and failure of counterparties to perform their contractual obligations. The Company does not undertake to update forward–looking statements or forward–looking information, except as required by law.