VANCOUVER, BC , May 20, 2021 /CNW/ - E79 Resources Corp. (CSE: ESNR) (OTCQB : ESVNF) ("E79" or the "Company") is pleased to report that it has received all requisite consents to begin drilling at its Beaufort Property. The Company plans to commence maiden diamond drilling this month to test high-priority soil geochemical targets. The drilling program forms part of a pipeline of exploration activities on its Beaufort Property consisting of reconnaissance soil sampling, in-fill sampling to define targets, local structural mapping, and drilling of orientated diamond core to provide information on rock type, structure, and gold mineralization below the zone of weathering. Beaufort has never seen systematic drilling beneath the weathered zone.

Reconnaissance and in-fill soil sampling continue along the nearly 20km trend of highly prospective ground that provided the source for much of the 1.2 million ounces of alluvial gold estimated to have been produced from the Beaufort goldfield. Our investigations indicate that gold was derived from local bedrock but, aside from a few small historical producers, the bedrock source of the alluvial gold has never been discovered . We are excited by the wealth of geological information this drilling program will provide on a poorly understood and enigmatic goldfield."

NNW-trending zones geochemically anomalous in gold, antimony, arsenic and lead were defined by reconnaissance soil sampling of the Central Grid (E79 Resources press release January 12, 2021 ). These trends are often associated with pyritic black slates and are interpreted to be stratigraphically-controlled. In-fill sampling defined clear geochemical targets along two of these NNW trends, two of which are orientated NNE (E79 Resources press release April 13, 2021 ). These trends are slightly oblique to the stratigraphy and are interpreted to be structurally-controlled. A third target has been identified at the intersection of the NNW-trending soil anomaly with a northeast-trending geophysical lineament. A fourth drill hole is planned to test the more westerly of the NNW-trending soil geochemistry anomalies and will pass beneath shallow historical workings that tested a NNW-trending quartz vein system (Figure 2).

All drill holes have been designed to reach their targets at a vertical depth greater than 100m , which is estimated to be the depth of weathering based on previous drilling nearby. The holes will vary in length from 250 to 300m and will cut sub-vertical interbedded siltstones and slates of the Beaufort Formation at an approximate angle of 40 degrees. The drill holes will be logged in detail for lithology, structure, alteration, veining and mineralization, and sampled for assay and geochemistry. 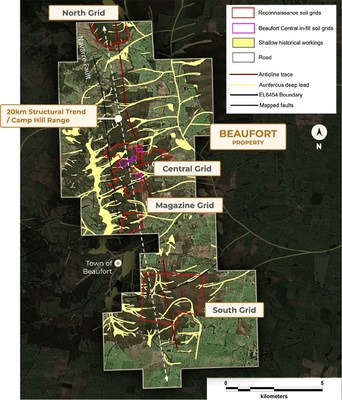 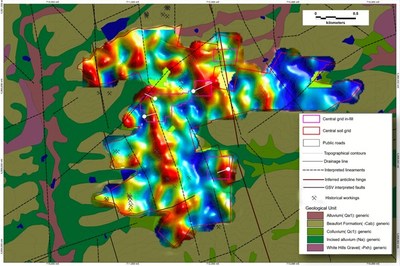 E79 Resources is focused on exploring for Fosterville -type mineralization at its Beaufort and Myrtleford properties in the Victorian Goldfields, Australia . At Beaufort, an opportunity exists to explore for a hard rock source of a major alluvial goldfield along a structure that is known to host gold in the region. The Myrtleford property represents the consolidation of an entire historic gold camp with over 70 past producing gold mines on the property, where the bulk of historic mining stopped at the water table.