Vancouver, British Columbia--(Newsfile Corp. - October 26, 2021) - E79 Resources Corp. (CSE: ESNR) (OTCQB: ESVNF) ("E79" or the "Company") is pleased to report on the identification of a new prospective trend of targets on its Myrtleford property in Victoria, Australia.

Martin Pawlitschek, E79's President and Chief Executive Officer stated, "ongoing target generation on our Myrtleford license has defined a new prospective structural trend in the Twist Creek area of our license. Twist Creek hosts historic mineralization along a 7km trend on which these mineralized structures typically have significant vertical extends. Historic records show that most of the gold mines on the Twist Creek trend stopped the water table, generally at around 30 metres depth. Follow up work is expected to define additional drill targets similar to those we have identified at Happy Valley."

Gold was discovered at the Twist Creek goldfield in 1852 with the first quartz mining recorded as occurring in 1860. The goldfield was considered by contemporary mining authorities as hosting only narrow quartz reefs and therefore appeared to have been overlooked by the larger companies and was only exploited by small parties of independent miners.

Due to a lack of major capital backing, the independent miners were unable to exploit the quartz reefs much below the standing water-table which was generally found around 30 meters below surface. In addition, almost all the ore mined was processed through third-party toll treatment plants, at considerable cost, meaning that the 'break-even' grade that miners needed to produce was often close to 1oz per tonne. These factors often meant that only extremely high grade (>1 oz/t Au) ore was mined and when mining operations reached the water table the mines were abandoned and new reefs (buried quartz veins) not searched for.

The Company has been undertaking a detailed review of all available historical information and this review combined with a recently completed LiDAR survey coupled with field reconnaissance has identified considerably more prospecting and historic mining operations than officially recorded. A significant finding is that mining appears to have been undertaken over considerably longer strikes than previously appreciated. Several distinct trends of workings of considerable extend have been identified and will be followed up with additional mapping and rock chip and soil sampling. 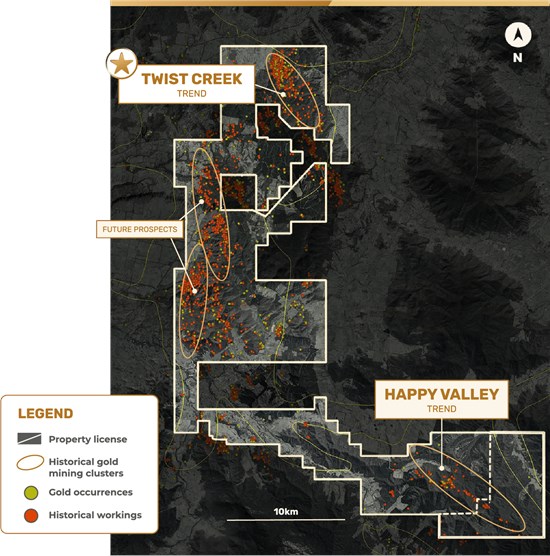 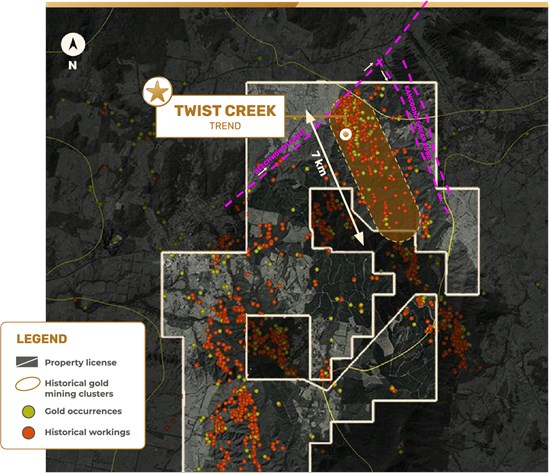 Regional structural mapping and interpretation has shown the goldfield to be constrained by the Beechworth Fault to the north and trends parallel to the major Kancoona Shear Zone which just lies to the east. The Beechworth Fault is interpreted to dip under the Twist Creek Goldfield.

There has been little modern surface exploration and no drilling undertaken within the Twist Creek Goldfield. The Company's recent successes at Happy Valley in confirming the presence of significant gold mineralization at depth well below any surface depletion zones gives significant encouragement to future drilling programs.

• Application to Land Managers and other relevant Stakeholders in Twist Creek State Forest to allow Low Impact Exploratory Drilling to be undertaken.

The Company would also like to announce the resignation of Rory Quinn from its board of directors.

E79 Resources is focused on exploring for high-grade gold at its properties in the Victorian Goldfields, Australia. The Myrtleford property represents the consolidation of an entire historic gold camp with over 70 past producing gold mines on the property, where the bulk of historic mining stopped at the water table. At Beaufort, an opportunity exists to explore for a hard rock source of a major alluvial goldfield along a structure that is known to host gold in the region.