VANCOUVER, BC , Jan. 18, 2021 /CNW/ - E79 Resources Corp. (CSE: ESNR) (" E79 " or the " Company ") is pleased to report commencement of new soil grid sampling within state forest at its Beaufort Project in Victoria in support of a new gold target area. The new grid has been designed to test an area over which gold nuggets up to 1.9g have been recovered by the exploration team (Figure 1). Further reconnaissance-scale soil sampling will be conducted on 100m by 100m spacing on three new areas after the sampling survey of the Central Grid completed in 2020 defined anomalies along the main North-North West striking structural trend (see previous release dated January 6, 2021 ). This reconnaissance program is designed to define new areas of geochemically anomalous soils which may develop in to drill targets. The 20km structural trend that runs through the property will be followed by further in-fill sampling and structural mapping as required to define new drill targets.

Rory Quinn , E79's President and Chief Executive Officer stated, "With over one million ounces of reported historic alluvial gold production from the target area  and no hard rock source yet to be identified, the recovery of a centimeter-scale gold nugget from our priority areas provides a lot of encouragement and excitement to the exploration effort. The size and nature of the nuggets point to a local source. We are excited that our work is already narrowing into a primary target area. We plan to follow up on this work as soon as possible and anticipate we will define new high priority targets to be considered for drilling."

Sampling has commenced on three new reconnaissance soil grids following the successful completion of a survey in the Central Grid in 2020 (Figure 3). As described in a previous release dated January 6, 2021 , reconnaissance-level sampling on a 100m by 100m grid successfully identified the trend of a pyritic black slate unit characterized by elevated levels of gold, arsenic and antimony, as well as an east-west trend defined by elevated gold. The definition of the gold-arsenic-antimony anomaly, in association with this pyritic black shale within a specific structurally complex trend, provides significant encouragement as this shows analogies with other major gold systems in Victoria . 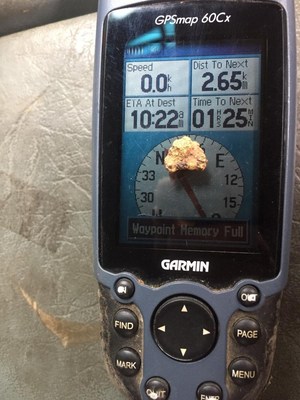 Approximately 1,000 samples from the top of bedrock will be collected for analysis of the clay fraction for gold and a multi-element suite using an Aqua Regia digestion followed by inductively coupled plasma mass spectrometry (ICP-MS) analysis. Samples will be analyzed in the field using a portable X-ray spectrometer prior to shipment to the laboratory to allow for immediate in-fill sampling of some areas. Data quality will be assessed using a comprehensive QA/QC program involving the use of field duplicates and certified reference materials.

The planned reconnaissance sampling of the North and South Grids was previously announced. A further priority area, the Magazine Grid (so named for the locations of the historical explosives magazines), has been designated in an area from which the exploration team has recovered gold nuggets up to 1.9g from shallow depths in colluvial soil, using a metal detector (Figure 3). The location where the nuggets were found occurs on the slope of a ridge above alluvial deposits, and their angular to sub-rounded shape indicates that they have not travelled far.

Large nuggets up to 420 oz have been found by historic work in the Beaufort lead (alluvial) systems. Some of these contained attached quartz material indicating a bedrock source and minimal transport. The locations of some of the historical nugget finds are shown in Figure 4 where it appears that they have been shed from the central ridge running through the tenement, the Camp Hill Range. This ridge is associated with historically mapped shallow hard rock shafts and prospecting pits, but no historical gold production is recorded from these areas, further pointing to the top of the ridge and the structural trend as the likely primary origin of the alluvial gold.

Most of the nuggets were found in gullies underlain by inferred northeast-trending faults in the hanging wall of the northwest-trending, east-dipping Navarre Fault. Many of these gullies were extensively worked historically to recover shallow gold. The origin of many of these nuggets is not fully understood. E79 will be the first company to conduct a detailed, systematic and extensive exploration campaign to define primary gold targets over the potential source areas of the historical alluvial gold production. 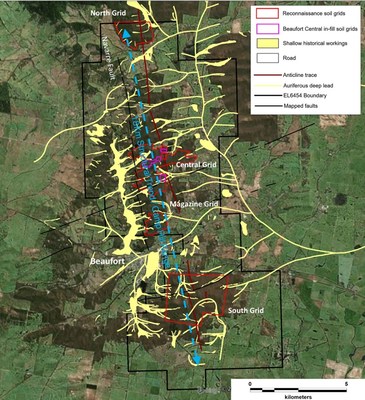 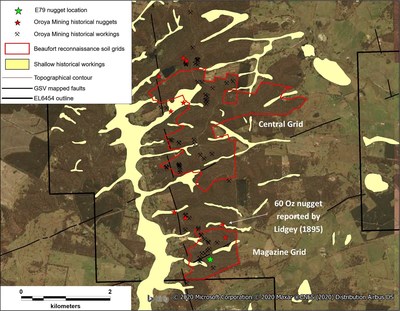 E79 Resources is focused on exploring for Fosterville -type mineralization at its Beaufort and Myrtleford properties in the Victorian Goldfields, Australia . At Beaufort, an opportunity exists to explore for a hard rock source of a major alluvial goldfield along a structure that is known to host gold in the region. The Myrtleford property represents the consolidation of an entire historic gold camp with over 70 past producing gold mines on the property, where the bulk of historic mining stopped at the water table. The Company continues to evaluate corporate development opportunities in the underexplored and historically prolific Victorian Goldfields.