KORE's CEO Scott Trebilcock stated: "Even with the great success of our systematic exploration programs, we are only scratching the surface of Mesquite-Imperial-Picacho District potential.  KORE controls approximately 31,000 acres of the District which was split between major gold companies in the 1990's and our field team is focussed on efficiently and systematically working this enormous land package.  With the Mesquite mine, the last active mine in Imperial County , nearing the end of its life, KORE's Imperial project and surrounding District may be the next opportunity to extend the 140-year modern gold mining history of Imperial County ."

KORE is committed to operating within the stringent environmental and labour standards of California .

Figure 2 shows the location of each named target area with all the rock chip and soil sampling data.  These zones all lie along the regionally extensive Copper Basin thrust fault.  Future sampling, mapping, scout back-pack drilling, geophysics and other exploration techniques are expected to further define these target areas.  Having the intact Imperial deposit to "tune" or "fingerprint" geophysical signatures, greatly enhances our confidence to target new discoveries under the alluvium along the trend. Details of the work were released January 7, 2020 , April 29, 2020 , December 8, 2020 and April 13, 2021 .

Figure 3 shows the District claim area with location of the Mesquite, Imperial and Picacho deposits along with the new claims staked in early 2021.

Sampling and Mapping Program Details
Discovery of gold in the dry stream beds (also called " arroyos " or " washes ") on the target areas are several kilometers from Mesquite, Picacho and/or Imperial and not downstream from any known deposits, indicating that gold is likely being generated from another source.  KORE will identify the main sources by executing a detail sampling program directly on strike of the geophysical anomaly.

Interpretation of KORE's recently completed satellite multi-spectral survey has identified additional alteration anomalies, many of which have yet to be mapped or tested.  This is positive as it indicates the alluvial cover is shallow in those areas, making a new oxide gold discovery easier and more attractive.  KORE also continues to find evidence of historic small scale mining activities in the District, including hand and bulldozer trenches and signs of historic placer mining activity.

KORE's exploration team collected 166 stream bed and 138 rock chip samples since our last reported results  on April 13, 2021 .  Samples collected averaged 4.75 kilogram in size and were taken at an average depth of 0.4 meters below surface.  Of the 638 stream samples taken so far, 410 assayed over the gold detection limit of 5 parts per billion and 11 assayed over 100 parts per billion (0.1 g/t) with 58 samples still pending. In addition, of the 355 rock samples taken, 38 have assayed over 100 parts per billion (0.1 g/t)with 83 samples still pending. Sample locations and assays for the eastern area from Imperial to Picacho are depicted on Figure 1.

About the Imperial Gold Project
KORE owns 100% of the Mesquite-Imperial-Picacho District which consists approximately 31,000 acres of claims capturing the entire 28-kilometer trend from the operating Mesquite mine (Equinox Gold - TSX:EQX) to the closed Picacho mine and including KORE's Imperial project as depicted on Figure 3 .  In the District, gold is hosted in local fault structures related to a series of regional faults connecting the known District deposits.  Those three District deposits (Mesquite, Imperial and Picacho) were discovered in exposed outcrops and from placer workings.  The rest of the District is covered by alluvium and has never been systematically explored.

The Mesquite-Imperial-Picacho District centers on KORE's Imperial project. Imperial is a structurally controlled intermediate sulfidation epithermal gold deposit. The 100% oxide gold deposit is currently defined at 2.44 kilometer long and up to 0.75 kilometer wide and is open both along strike and downdip. It is hosted in a shallowly southwest dipping, amphibolite grade metamorphic rock suite along a west-northwest trending low-angle regional thrust fault system which controls the regional geometry of mineralization. East-west striking, post-mineralization normal faults control the property scale geometry of mineralization. Geophysical characterization of the deposit and regional controlling structures is an essential component of exploration for additional resources.

Imperial has a mineral resource estimate and a positive preliminary economic assessment effective April 6, 2020 with the following highlights:

About KORE Mining
KORE Mining is focused on responsibly creating value from its portfolio of gold assets in California, USA . The Company is advancing the Imperial project towards development while continuing to explore across both district-scale gold assets.  Management and Board (35% ownership), along with strategic investor, Eric Sprott (26% owner), are aligned with all KORE shareholders with the goal of creating per share value.

Technical information with respect to the District and Imperial Gold Project contained in this news release has been reviewed and approved by Marc Leduc, P.Eng, who is KORE's COO and is the qualified person under National Instrument 43-101 responsible for the technical matters of this news release.

Forward–looking statements in this news release include, but are not limited to, statements with respect to: the strategy, timing and implementation of  permit regional exploration drilling in the 28-kilometer Mesquite-Imperial-Picacho District (" Regional Exploration Drilling ") and permit drilling to advance the existing Imperial gold deposit (" Imperial Zone ") toward feasibility and mine permitting at the Imperial project; the timing of submitting Environmental Assessment report(s) for one or more areas of the Imperial project; potential actions, behavior or position of the Bureau of Land Management (the "BLM ") ; the underexplored and prospective nature of the Imperial Regional Exploration Drilling area; the results of the preliminary economic assessments for the Imperial Project, including future project opportunities, the projected NPV, permit timelines, the current mineral resource estimate, and the ability to obtain the requisite permits; the market and future price of and demand for gold; the opportunities of expansion at the Imperial Project; and the ability to work cooperatively with stakeholders, including all levels of government. Such forward–looking statements, and any assumptions upon which they are based, are made in good faith and reflect our current judgment regarding the direction of our business. In connection with the forward–looking information contained in this presentation, the Company has made numerous assumptions, including, among others: there being no significant change to current geotechnical, metallurgical, hydrological and other physical conditions at the Imperial Project; exploration, permitting, and development of the Imperial Project being consistent with current expectations and planning; the geological, permitting and economic advice that the Company has received is reliable and is based upon practices and methodologies which are consistent with industry standards; and other planning assumptions. While the Company considers these assumptions to be reasonable, these assumptions are inherently subject to significant uncertainties and contingencies.

Forward looking information involves known and unknown risks, uncertainties and other factors which may cause the actual results, performance or achievements of the Company to be materially different from any future results, performance or achievements expressed or implied by the forward–looking information. Known risk factors include, among others: the outcome of BLM's review processes for permitting, including the final outcome(s) of BLM's mineral claim validity examination(s) and administrative review process(es) with respect to the Imperial Zone, including a change to the findings from the mineral claim validity examination conducted in 2002 for the mill sites at the Imperial Zone, resulting in the Company having to move its future Imperial Zone project support facilities to areas that are not within the Indian Pass mineral withdrawal area; the possibility that BLM may require and/or conduct further mineral claim validity examinations with respect to the Imperial project, and the outcome and final determination of such examination could, among other things, invalidate one or more mining claims; the possibility that BLM or other governmental authority review of the Regional Exploration Drilling program, delays or changes the Company's plan for Regional Exploration Drilling permitting, which could result, among other things, in delays, additional project requirements, additional costs and uncertainty of meeting anticipated program milestones; the exploration drill program may not be completed as planned; the need to obtain additional financing; uncertainty as to the availability and terms of future financing; the possibility of delay in exploration or development programs and uncertainty of meeting anticipated program milestones; uncertainty as to timely availability of permits and other government approvals.

Additional risks and uncertainties are described in the "Risks" sections of (i) the Company's Annual Information Form for the year ended December 31, 2020 prepared as of April 29, 2021 , and (ii) the Company's Management's Discussion and Analysis for the six months ended June 30, 2021 , bothavailable under the Company's issuer profile on www.sedar.com . 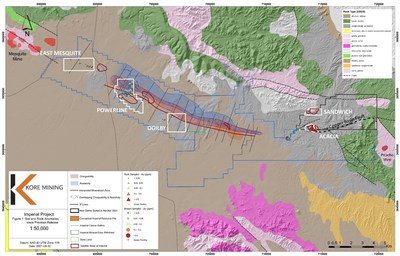 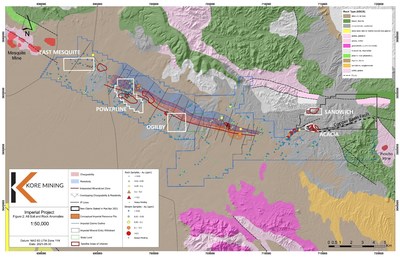