Coverage made possible by the sponsorship of our featured companies: Click here to see more about Mawson Gold Ltd.

VANCOUVER, BC / ACCESSWIRE / July 6, 2021 / Mawson Gold Limited ("Mawson" or the "Company") (TSX:MAW)(Frankfurt:MXR)(OTC PINK:MWSNF) is pleased to announce assay results from three further drill holes (MDDSC013A-15A) from the 100%-owned Sunday Creek project in the Victorian Goldfields of Australia. The project is an epizonal-style gold prospect located 56 kilometres north of Melbourne and contained within 19,365 hectares of granted exploration tenements.

Michael Hudson, CEO, states: "Our Victorian portfolio continues to successfully deliver at Sunday Creek with the deepest hole drilled to date intersecting broad mineralization with multiple impressive higher-grade zones including 15.3 metres @ 2.2 g/t Au and 2.1% Sb (4.3 g/t AuEQ) located 50 metres down-dip from our closest drill hole. We continue to be impressed by the continuity of gold mineralization as we drill to depth, as well as the increasing antimony grades. Drilling continues as we work towards a maiden resource."

MDDSC015A was drilled 50 metres below Mawson's previously reported drill hole MDDSC012 which intersected 36.4 metres @ 2.4 g/t Au and 0.4% Sb, 2.8 g/t AuEQ from 177 metres demonstrating the consistency of mineralization continuing to depth (Figure 2 and 3). MDDSC013 was drilled 50 metres SE of MDDSC015A and supports the interpretation that higher grade mineralization dips steeply to the NW. MDDSC014, drilled beneath the central zone, drilled under the NE plunging enveloping mineralized surface, intersected low-grade mineralization, with a near-surface best result of 1 metre @ 0.6 g/t Au from 8.2 metres. MDDSC013 and MDDSC015 were abandoned at shallow depths due to hole deviation near their collars and redrilled as MDDSC013A and MDDSC015A respectively.

Mawson has now completed eighteen drill holes (MDDSC001-018) for 2,968 metres at the Sunday Creek gold-antimony project. Drilling continues and assays from 15 out of the 18 finalized holes have been released. Geophysical surveys (3D induced polarization and ground magnetics) and detailed LiDAR surveys have been completed. A 2,500-point soil sampling program at Sunday Creek is near completion extending east-northeast from drilling areas to test the 11-kilometre trend of historic epizonal dyke-hosted mineralization within Mawson's tenured areas. The integration of the LiDAR, soil sampling data, rock chips and geophysics is key to the expansion of the project along strike.

At Sunday Creek, historic gold mining occurred between 1880 and 1920 over a greater than 11-kilometre strike length. Drilling during 1990-2000s focused on shallow, previously mined surface workings, covering an area of 100 metres in width, 800 metres length but, only to 80 metres average depth. As such, the entire field remains open along strike and to depth. Apollo was the original deepest shaft to 100 metres in the late 1800s in a series of sheeted stibnite-rich veins, predominately hosted within a zone of felsic dykes and related alteration that broadly controls gold distribution.

Mineralization at Sunday Creek is hosted in late-Silurian to early-Devonian-aged shales and siltstones containing a series of dykes of felsic-intermediate composition. Gold is concentrated mainly in and around the north dipping and EW to NE-SW striking felsic dykes and the halo of associated pre-mineralization dyke-related sericite-pyrite alteration. The mineralization generally lies within brittle multiple sheeted veins and cataclastic zones. Individual NW striking high-grade quartz-stibnite veins at Apollo and Golden Dyke, and cataclastic zones at Gladys were the focus of historical mining at Sunday Creek. These zones have been proven to continue to depth by Mawson. Broader vein-hosted and cataclastic mineralization grading less than 15 g/t gold appears untouched by the historic miners.

Tables 1-3 provide collar and assay data. The true thickness of the mineralized interval is interpreted to be approximately 70% of the sampled thickness. Gold-only intersections are reported with a lower-cut of 0.5 g/t gold over a 2.5 metre width except on the edge of calculated intervals where 1 metre @ >2.0 g/t gold was applied. No upper cut-off was applied.

A diamond drill rig from contractor Starwest Pty Ltd was used in the program. Core diameter is HQ (63.5 mm) and oriented with excellent core recoveries averaging close to 100% in both oxidized and fresh rock. After photographing and logging in Mawson's core logging facilities in Nagambie, intervals were diamond sawn in half by Mawson personnel. Half core is retained for verification and reference purposes. Analytical samples are transported to On Site Laboratory Services' Bendigo facility which operates under both an ISO 9001 and NATA quality systems. Samples were prepared and analyzed for gold using the fire assay technique (25 gram charge), followed by measuring the gold in solution with flame AAS equipment. Samples for multi-element analysis use aqua regia digest and ICP-MS methods. The QA/QC program of Mawson consists of the systematic insertion of certified standards of known gold content and blanks within interpreted mineralized rock. In addition, On Site inserts blanks and standards into the analytical process.

Mr. Michael Hudson (FAusMM), Chairman and CEO for the Company, is a qualified person as defined by National Instrument 43-101 - Standards of Disclosure or Mineral Projects and has prepared or reviewed the preparation of the scientific and technical information in this press release.

Mawson Gold Limited is an exploration and development company. Mawson has distinguished itself as a leading Nordic Arctic exploration company with a focus on the flagship Rajapalot gold-cobalt project in Finland. Mawson also owns or is joint venturing into three high-grade, historic epizonal goldfields covering 470 square kilometres in Victoria, Australia and is well placed to add to its already significant gold-cobalt resource in Finland. 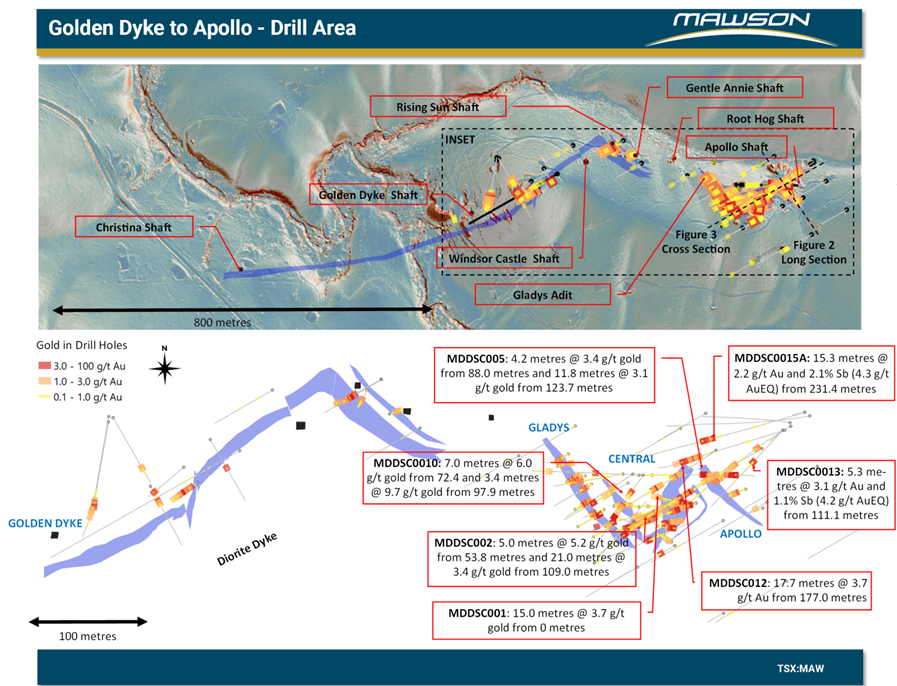 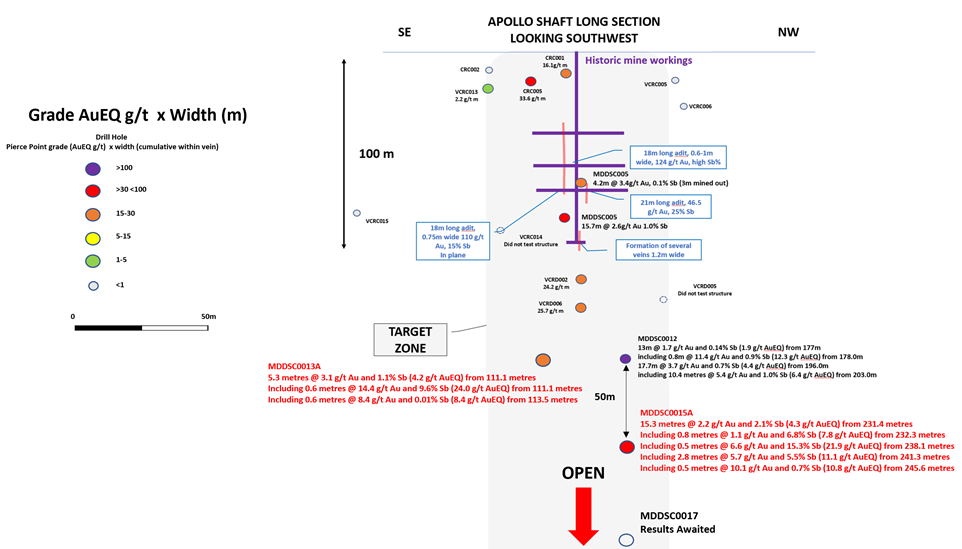 Figure 3: Cross Section of the Gladys to Apollo Mine Area showing Mawson drillholes MDDSC0013 and MDDSC0015A reported here, and enveloping surface to mineralization. 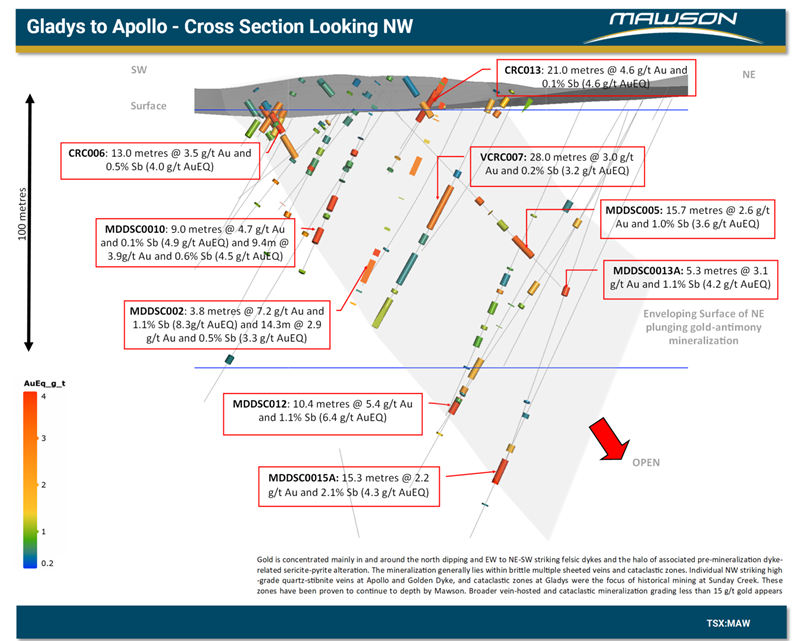 Note: (1) The true thickness of the mineralized interval is interpreted to be approximately 70% of the sampled thickness.

Note: (1) The true thickness of the mineralized interval is interpreted to be approximately 70% of the sampled thickness.