The following table highlights some of the results from the 141 surface rock samples collected during the 2021 field program.

Lawrence Roulston, the company's CEO, stated, "These outstanding results confirm the historic data, but more importantly expand the footprint of the previously identified porphyry copper-gold system. Integrating these results with the wealth of earlier information will enhance our geological understanding of this system. We now have further evidence that the property has the potential to host a porphyry deposit with favourable grades similar in scale to the other deposits in this prolific district."

The 244 square kilometre Telegraph Project is located in BC's Golden Triangle, in the vicinity of several large porphyry deposits including Galore Creek (Teck - Newmont), Schaft Creek (Teck - Copper Fox), Big Red (Libero Copper and Gold), Saddle and Saddle North (Newmont) and the operating Red Chris copper-gold mine (Newcrest - Imperial Metals). Access to the property is via helicopter or fixed wing plane to an airstrip on the eastern part of the claim block. The Stikine River, 3 km to the west of the property, is navigable from the ocean port of Wrangell, Alaska. The Barrington Road, from Telegraph Creek, comes to within 15 km of the northern part of the claims.

The property was consolidated by Mountain Boy earlier this year leading to the first comprehensive exploration of this well mineralized area. Results from at least 50 companies, each working on their own discrete targets, were and continues to be integrated into a database which will help guide future exploration efforts.

The objective of the 2021 field program was to ground truth and re-visit a number of historic showings, evaluate the 2014 drill core from the DOK Main zone and explore new parts of the property that had either promising historic stream sediment geochemistry or were on strike and trend with known areas of mineralization. Some contour soil samples were also collected to ground truth some of the 1970's soil geochemistry and to tie in and add to some of the historic soil geochemistry in the Red Creek area.

A significant new discovery, approximately three kilometres southeast of the DOK Main Zone, produced 19 surface samples that assayed 0.5% copper and greater. This new zone is traceable over 400 metres and assayed up to 17.9% copper (sample E075465). The zone straddles what historically would have been two separate claim blocks owned by different companies. It is also on the margin of the known Red Creek copper-gold soil geochemistry anomaly.

A second new zone was discovered a further one kilometre from the abovementioned zone, along the same south-easterly trend. This zone also yielded several samples over 1% copper. Figure 2 shows the location of the two new zones and their location in comparison to historic soil geochemistry.

On the eastern portion of the property, a third new zone of elevated copper values was discovered. This zone, called Yeti West, also produced a number of samples that assayed greater than 1% copper, with the highest assaying 3.6% copper (sample C0034000). This zone trends over 700 metres. Figure 3 shows the location of the Yeti West zone in comparison to the historic Yeti zone.

In addition to mapping and prospecting, 2014 drill core samples and surface samples were selected for short wave near infrared (SWIR) analysis. The SWIR analysis was performed by Dr. Farhad Bouzari from the Mineral Deposits Research Unit, at the University of British Columbia (MDRU). The purpose of this analysis is to identify alteration minerals and characterize the style of mineralization. Initial results from the SWIR analysis confirm the presence of porphyry-style alteration minerals and suggest that multiple hydrothermal pulses have altered and mineralized the host rocks in both the DOK Main and Yeti areas.

The findings from field work further confirm the potential for large copper-gold porphyry systems on the property and outlined new prospective areas for future exploration.

As early as 1970, work was carried out on a portion of what is now the DOK prospect focusing on copper. A soil geochemistry survey outlined an extensive zone of copper enrichment that extends over a 1.5-kilometre southeasterly trend. Some trenching and drilling occurred at this time. This work demonstrated the copper porphyry potential in the Dokdaon Creek basin.

With the discovery of the Snip and Eskay Creek gold and silver deposits, exploration resumed in the 1990's. That work resulted in the discovery of several additional mineral occurrences on the property including the Yeti.

In the early 2000's the DOK Main area was staked by Charlie Grieg and Bernie Kreft. The ground immediately south of the DOK Main was staked by another party who also staked the Yeti area. In total, at least 50 entities have carried out work on the property now held by Mountain Boy. This includes geological mapping, prospecting, soil, stream sediment and rock geochemistry, an airborne geophysical and radiometric survey as well as two drill holes on the DOK Main target. The geological team continues to compile this extensive data base and it is providing an excellent starting point for advancing this prospective property.

Figures 2, 3 and 4 show historical soil geochemistry data from the DOK-X, Yeti and DOK Main zones and include the newly discovered zones from the 2021 program and highlight area meriting detailed follow-up.

In the coming months the Mountain Boy technical team will continue to integrate the historic and new data to better understand the geological picture. Work next field season will focus on testing identified targets and is also expected to generate new gold-copper targets in this large and fertile mineralized system. 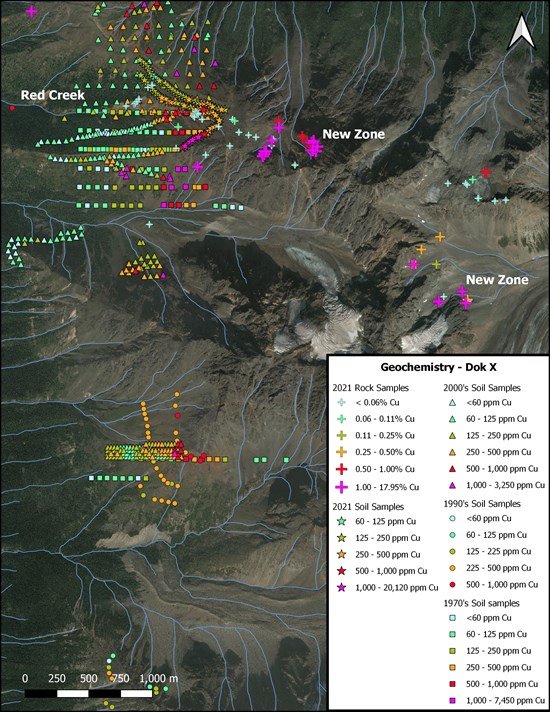 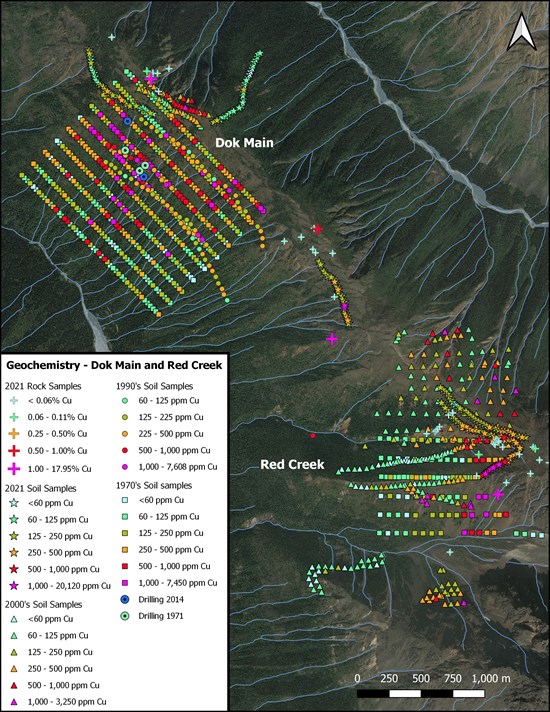 Eighty drill core and forty-three surface samples from the Telegraph project have been included in a Federal Government funded research program known as the Targeted Geoscience Initiative (TGI-6). Dr. Christopher Lawley is a gold metallogenist and geochemist who has been working with the Geological Survey of Canada (GSC) since 2012. Last summer, the Targeted Geoscience Initiative (TGI) program was renewed with a particular focus on critical raw materials. Research will focus on the concentrations of Re, Bi, Te, Se, and PGE in porphyry and epithermal mineral systems in the Golden Triangle. These elements are poorly understood because of their complexity and the superposition of many mineralizing events. Copper is also included in this study as it is defined as a critical metal. This research has practical applications in identifying ore controls and ore guides.This research is being conducted in collaboration with the British Columbia Geological Survey and MDRU at UBC. Preliminary results are anticipated in the new year.

Additional samples collected in the latter part of the 2021 field season are being sent in for SWIR analysis. Results and interpretation of these results will be integrated with the other available data (geochemistry, geophysics, radiometric) to help evolve Mountain Boy's understanding of the mineralizing systems underlying the Telegraph property.

The technical disclosure in this release has been read and approved by Andrew Wilkins, B.Sc., P.Geo., a qualified person as defined in National Instrument 43101.

On behalf of the Board of Directors:

To view the source version of this press release, please visit https://www.newsfilecorp.com/release/107463