Coverage made possible by the sponsorship of our featured companies: Click here to see more about Patriot Battery Metals Inc.

Darren Smith, Vice President of Exploration of the Company, comments: “It is hard to find words to adequately describe the impressive nature of the lithium mineralization in drill hole CV22-083. Visual estimates of spodumene abundance may give you a sense, but assays are the true measure and have certainly astounded with this hole. As we move east, we are defining a significant high-grade zone at a coarse drill spacing of 50 to 100 m. The recently commenced winter drill program will continue to probe and delineate this area ahead of an initial mineral resource estimate planned for the first half of 2023. Drill hole CV22-083 has raised the bar ever higher with respect to the considerable potential at CV5 as we continue to delineate it, and by extension, the rest of the CV lithium district held by the Company that has yet to be drill tested.”

Drill hole CV22-074 is the most westerly drill hole completed to date at the CV5 Pegmatite and returned a well-mineralized interval of 16.9 m at 2.00% Li 2 O (Figure 5). The Company intends to continue step-out drilling along strike westwardly as part of the current winter drill program to test for the extension of the spodumene pegmatite. The pegmatite is interpreted to continue for at least another 125 m in this direction based on a mineralized outcrop present along strike (Figure 1). It is possible that the CV5 Pegmatite may extend under the relatively thin glacial till cover to the CV13 Pegmatite cluster, situated approximately 4.3 km to west-southwest, which is anticipated to be drill tested during the 2023 drill campaign. Further, strong intersections continue to be retuned over the western portions of the drill area at CV5, including 41.3 m at 1.01% Li 2 O (CV22-075), 31.2 m at 1.95% Li 2 O (CV22-070), and 49.5 m at 1.33% Li 2 O (CV22-080). Visually, the spodumene pegmatite is very similar at both the eastern and western extent of the drill area, emphasizing the scale and robustness of the lithium mineralizing system at CV5.

For the drill holes reported herein, core assays for pegmatite intervals greater than two (2) m are presented in Table 1 and drill hole locations in Figure 1. Drill hole coordinates and other attributes are also available in Table 1 and the Company’s website, which has a downloadable excel spreadsheet listing assay results from prior drill holes. Core assay results for twenty-four (24) drill holes from the 2022 drill campaign remain to be reported – ten (10) at the CV5 Pegmatite cluster and fourteen (14) at the CV13 Pegmatite cluster.

The 2022 drill campaign at Corvette has significantly expanded lithium mineralization at the CV5 Pegmatite. The drilling to date has largely been completed at approximately 100 m spacing (down to ~50 m in some places) with the principal spodumene pegmatite body (CV5), flanked by several secondary lenses, currently traced by drilling over a distance of at least 2,200 m, remaining open along strike at both ends and to depth along most of its length . 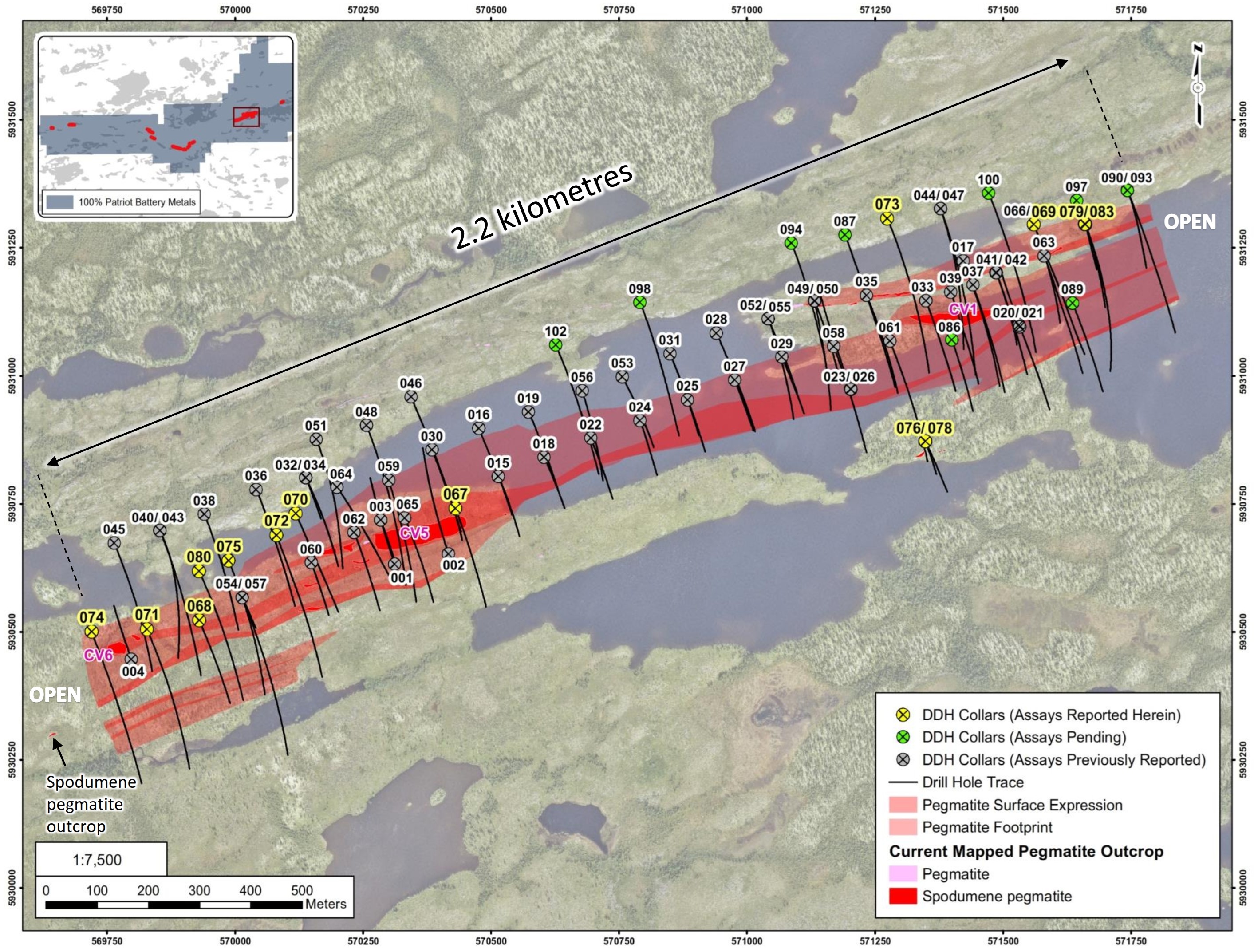 Figure 1: Drill hole collar locations at the CV5 Pegmatite for holes completed through 2022 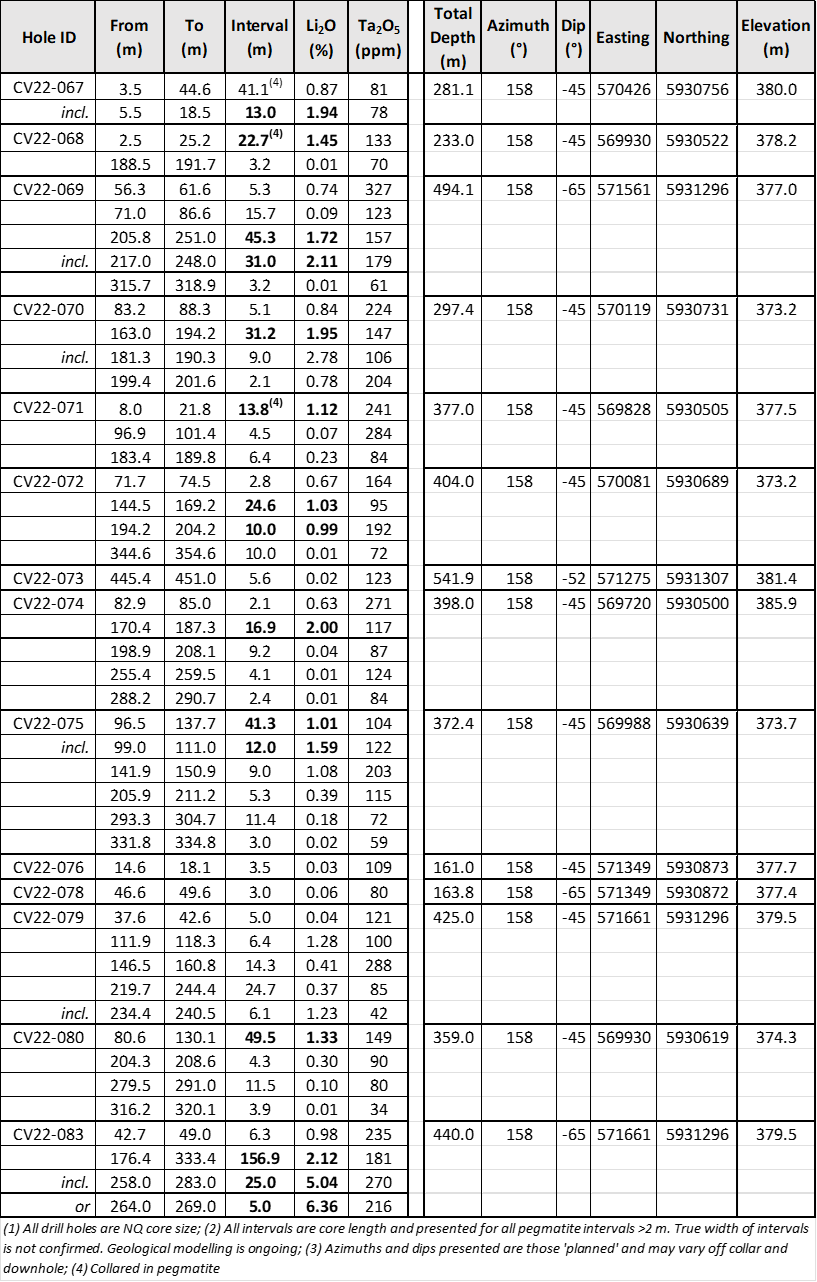 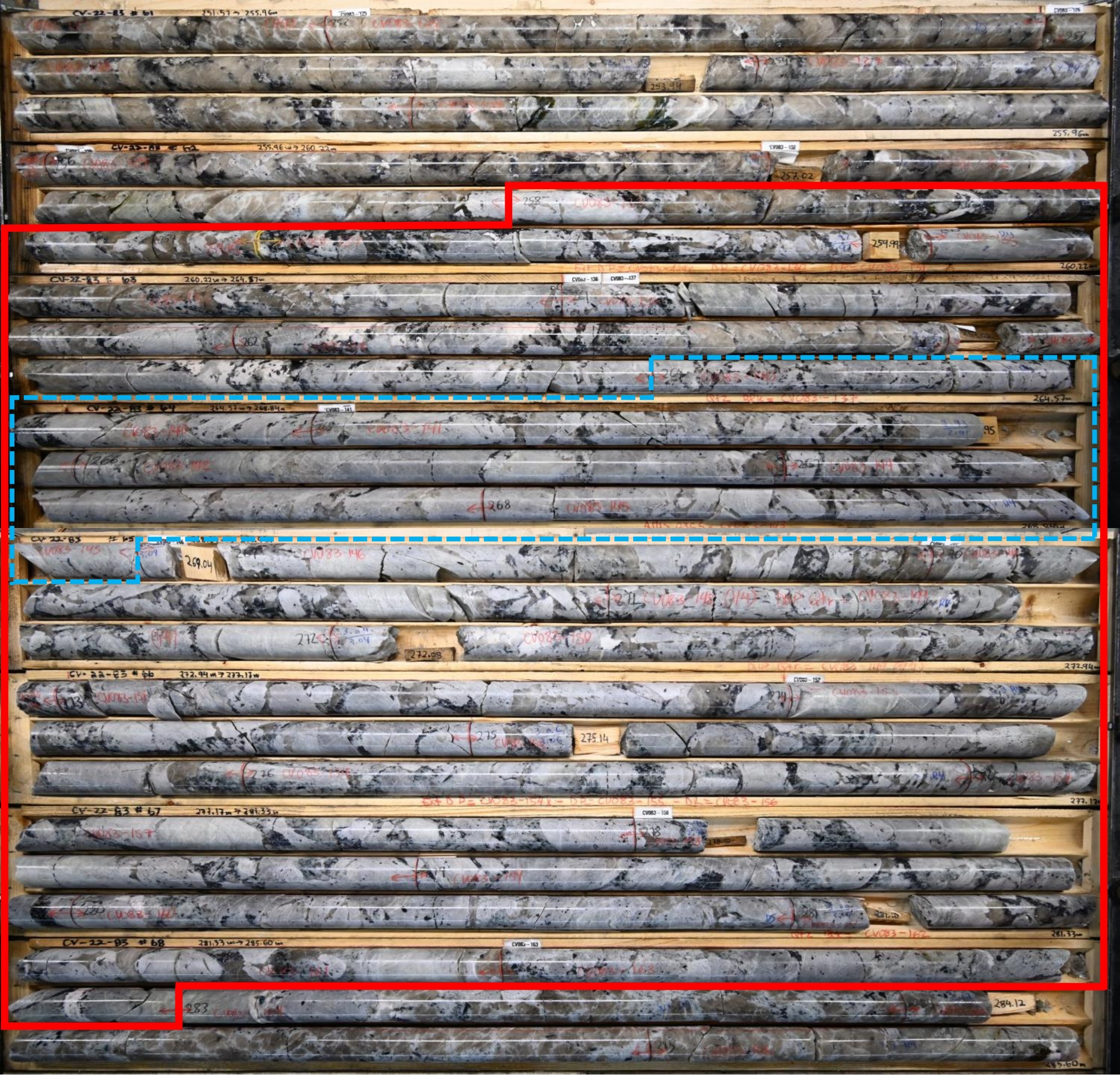 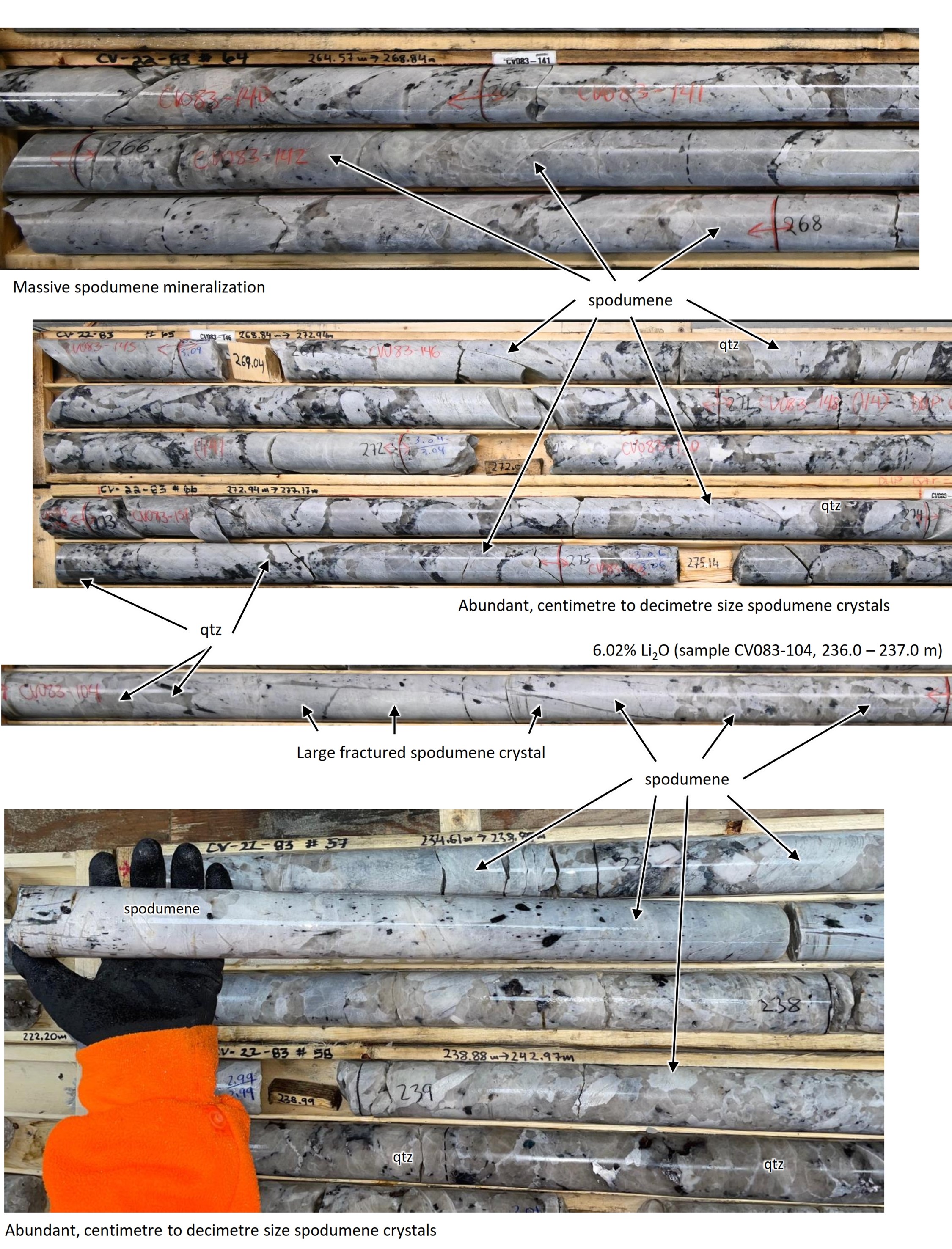 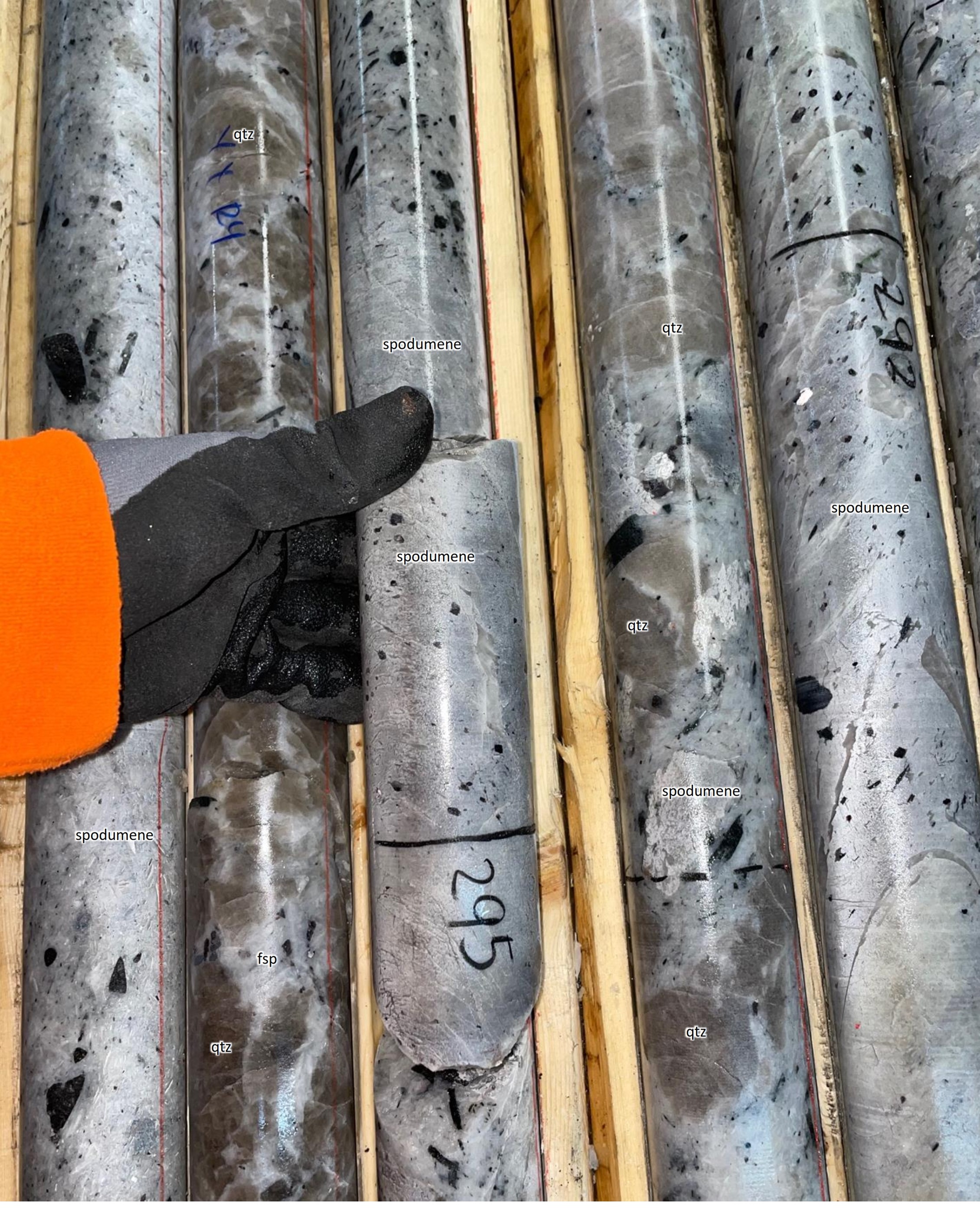 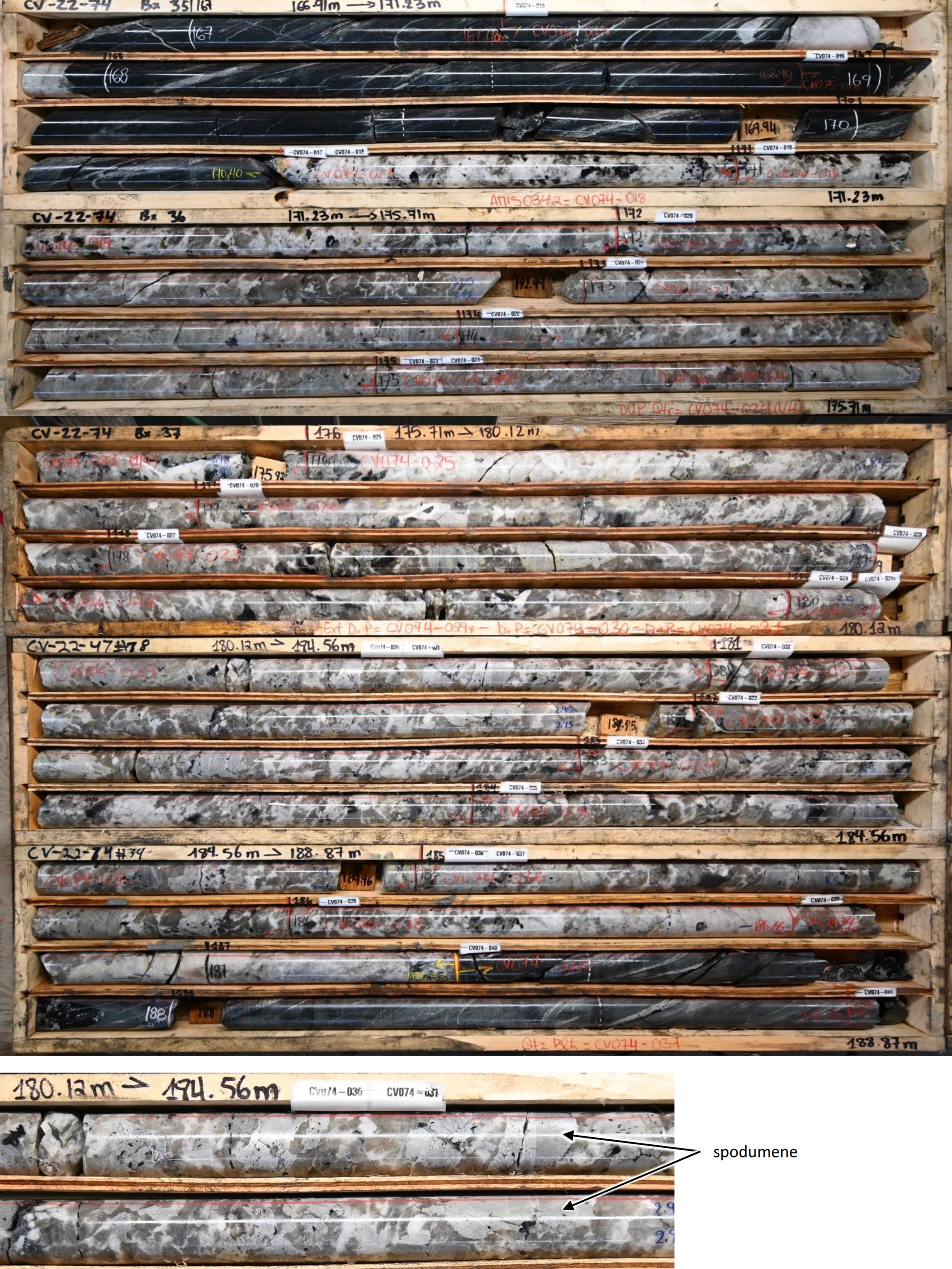 A Quality Assurance / Quality Control protocol following industry best practices was incorporated into the program and included systematic insertion of quartz blanks and certified reference materials into sample batches, as well as collection of quarter-core duplicates, at a rate of approximately 5%. Additionally, analysis of pulp-split and coarse-split sample duplicates were completed to assess analytical precision at different stages of the laboratory preparation process, and external (secondary) laboratory pulp-split duplicates were prepared at the primary lab for subsequent check analysis and validation.

All core samples collected were shipped to SGS Canada’s laboratory in Lakefield, ON, for standard sample preparation (code PRP89) which includes drying at 105°C, crush to 75% passing 2 mm, riffle split 250 g, and pulverize 85% passing 75 microns. The pulps were shipped by air to SGS Canada’s laboratory in Burnaby, BC, where the samples were homogenized and subsequently analyzed for multi-element (including Li and Ta) using sodium peroxide fusion with ICP-AES/MS finish (codes GE_ICP91A50 and GE_IMS91A50).

About the CV Lithium Trend

To date, six (6) distinct clusters of lithium pegmatite have been discovered across the Property – CV5 Pegmatite and associated lenses, CV4, CV8-12, CV9, CV10, and the recently discovered CV13. Given the proximity of some pegmatite outcrops to each other, as well as the shallow till cover in the area, it is probable that some of the outcrops may reflect a discontinuous surface exposure of a single, larger pegmatite ‘outcrop’ subsurface. Further, the high number of well-mineralized pegmatites along the trend indicate a strong potential for a series of relatively closely spaced/stacked, sub-parallel, and sizable spodumene-bearing pegmatite bodies, with significant lateral and depth extent, to be present.

The information in this news release that relates to exploration results for the Corvette Property is based on, and fairly represents, information compiled by Mr. Darren L. Smith, M.Sc., P.Geo., who is a Qualified Person as defined by National Instrument 43-101, and member in good standing with the Ordre des Géologues du Québec (Geologist Permit number 1968), and with the Association of Professional Engineers and Geoscientists of Alberta (member number 87868). Mr. Smith has reviewed and approved the technical information in this news release.

Mr. Smith has sufficient experience, which is relevant to the style of mineralization, type of deposit under consideration, and to the activities being undertaken to qualify as a Competent Person as described by the JORC Code, 2012. Mr. Smith consents to the inclusion in this news release of the matters based on his information in the form and context in which it appears.

Patriot Battery Metals Inc. is a mineral exploration company focused on the acquisition and development of mineral properties containing battery, base, and precious metals.

The Company also holds 100% ownership of the Freeman Creek Gold Property in Idaho, USA which hosts two prospective gold prospects - the Gold Dyke Prospect with a 2020 drill hole intersection of 12 m at 4.11 g/t Au and 33.0 g/t Ag, and the Carmen Creek Prospect with surface sample results including 25.5 g/t Au, 159 g/t Ag, and 9.75% Cu.

This news release has been approved by the Board of Directors,

No securities regulatory authority or stock exchange has reviewed nor accepts responsibility for the adequacy or accuracy of the content of this news release.

(Criteria listed in the preceding section also apply to this section.)