Coverage made possible by the sponsorship of our featured companies: Click here to see more about Prospector Metals Corp.

Vancouver, British Columbia--(Newsfile Corp. - January 19, 2023) - Prospector Metals Corp. (TSXV: PPP) (OTCQB: PMCOF) (FSE: 1ET0) ("Prospector" or the "Company") is pleased to announce that it has acquired a 100% interest in the Devon and Garden Ni-Cu-PGE projects in Ontario through staking as part of a broader Ni-Cu-PGE exploration strategy with a focus on high-grade, conduit-hosted deposits hosted within under-explored large igneous provinces.

Stated Jo Price, P. Geo, VP Ex. of Prospector: "Both the Devon and Garden Projects offer excellent discovery opportunities in areas that have seen little systematic historical exploration despite exhibiting many of the geological traits, typical of major Ni-Cu-PGE deposits in Ontario. Very limited historic sampling has returned significant grades of Ni, Cu, and PGE's. Because these projects have been acquired by staking the projects are owned 100%, are not subject to any royalties, and have no other obligations such as earn-in requirements." 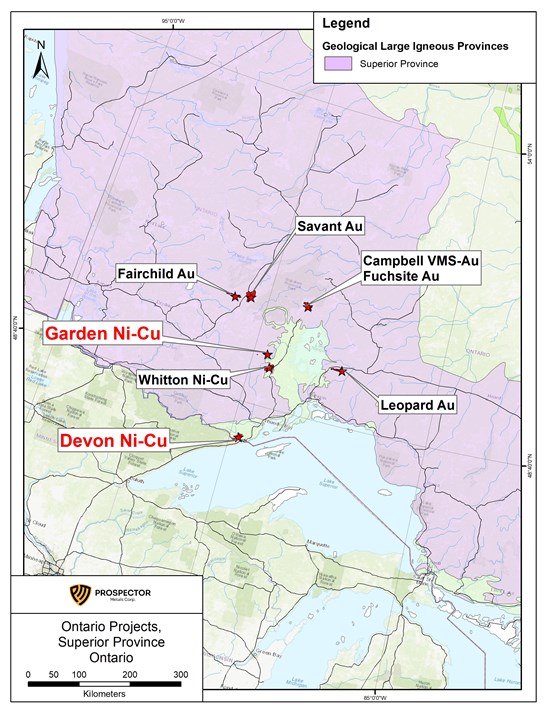 Figure 1. Geological Provinces in Ontario with Locations of Garden and Devon Projects. 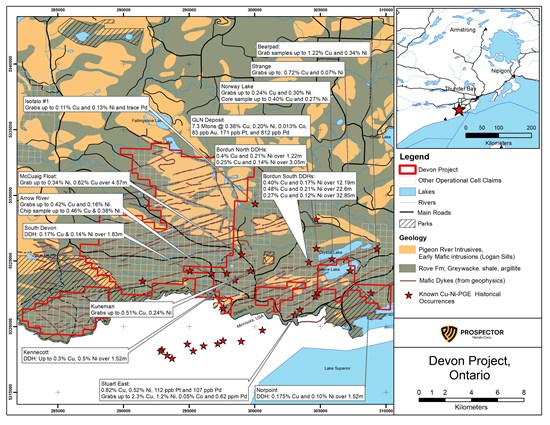 1 Historical assay values have not been independently verified by the Company and a potential investor should not place undue reliance on historical results when making an investment decision, nor should they be used as the sole criterion for making investment decisions. There is no assurance that the Company can reproduce such results or that the historical results described therein will be realized. 2 "Best surface samples" are grab / select samples and not necessarily representative of mineralization hosted on the property.

The region is on an Archean craton margin, covered by a sulfide-bearing sedimentary sequence, a known ideal geotectonic setting for major magmatic sulfide deposits. The dykes are emplaced along normal faults which provide ideal conduits for deep seated fertile mafic magmas to rise quickly through the crust without losing their chalcophile elements or PGE's, thus facilitating the transport and emplacement of these elements near surface in the earth's crust. The region is intruded by numerous olivine-tholeiite, mostly dyke-form intrusions, which can contain disseminated to locally massive magmatic Ni-Cu sulfides with PGEs, as documented from numerous historical prospects and occurrences. Additionally, there are numerous Ni-Cu-PGE occurrences outside of the project area, as well as to the southwest in Minnesota, on the same dykes that strike into Prospector-held mineral claims. Major Pigeon River dykes are typically 50-70 m in width but are locally up to 150 m wide. The dykes locally bifurcate, as well as change orientation from dykes to sill-form intrusions.

Assimilation of pyritic shales from the lower portion of the host Rove Formation sedimentary sequence is evidenced by abundant partially digested sulfidic sedimentary xenoliths, and confirms contamination of the magmas with crustal sulfides, resulting in the formation of magmatic sulfides, with Ni likely being sourced from the high-Mg olivine-rich magmas. The Pigeon River dykes are the older portion of a major ~1097 to 1092 Ma Mg-rich mafic intrusive pulse that occurred during development of the Mid-Continent Rift System. The youngest member of this magmatic pulse, the Crystal Lake Gabbro, contains a significant Ni-Cu-PGE resource (Figure 2), so it is possible that the older more voluminous and olivine-rich portions of the intrusive pulse, the Pigeon River dykes, are even more favorable.

Significant portions of the area remain under-explored despite the favourable setting and ease of access, particularly in the western portion of the newly staked area. 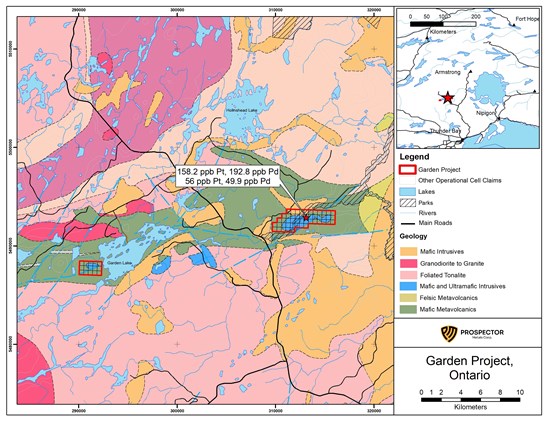 The western claim block is dominated by an olivine-clinopyroxenite intrusion with possible affinities to the Lac des Iles suite of rocks. The 700 m E-W x 400 m N-S intrusion exhibits a 2-lobed magnetic response, with each lobe ~ 300 nT above local magnetic background and there is a trend of 2-5 Siemens DIGHEM conductors along its northern margin, including one 5-10 Siemens conductor, which have not been adequately explored. The intrusion contains medium to coarse grained hornblende gabbro phases along its eastern contact and exhibits igneous layering near the contact striking northeast with an apparent northwest dip.

The intrusion hosts disseminated fine grained blebs of pyrite and lesser pyrrhotite and disseminated magnetite. Inco drilled a hole on a coincident magnetic high & EM conductor close to the olivine-pyroxenite in 1966. This hole was 36.6 m long and intersected 1.2 m of amphibolite with magnetite followed by a series of graphitic metavolcanic rocks with 2 to 10% sulphide. No assays were reported. Historical geochemical anomalies near the olivine-pyroxenite include up to 0.84-1.58 ppb Ni in lake water samples, and 88.1-121.0 ppm Cu, 30.9-39.0 ppm Ni in lake sediments.

The intrusions contain highly variable amounts of sulphides either as disseminated grains or within shears. East of the Mooseland River, the intrusion contains disseminated, fine to medium grained pyrrhotite and pyrite constituting less than 1% of the rock. West of the river, fine to medium grained sheared gabbro zones up to 1 m wide, oriented approximately north-south or east west, contain 3% to 5% fine grained pyrite with minor pyrrhotite. Samples of the shear, massive gabbro, and layered gabbro were analysed for PGE, with best values of 36 ppb Pt, 24 ppb Pd.

Following a thorough digital compilation and audit of the available historical data for the projects including 3D magnetic inversion modelling of existing magnetic data, further geophysical surveys may be flown, followed by prospecting programs to target and ground truth mineralization with an emphasis on potential structural controls. Localized ground geophysics of selected targets would likely follow should this be warranted to define highly conductive buried targets in potential feeder systems.

The technical content disclosed in this press release was reviewed and approved by Jo Price, P.Geo., M.Sc., VP Exploration of Prospector, and a Qualified Person as defined under National Instrument NI 43-101 ("NI 43-101").

Prospector Metals Corp. is a Discovery Group Company with a business model focussed on district scale, early-stage exploration of gold and base metal prospects and create shareholder value through new discoveries. The Company's focus is to identify underexplored or overlooked mineral districts which display important structural and mineralogical similarities with well-endowed mining camps. The majority of the projects acquired by Prospector occur in Ontario, Canada, which is a tier-1 mining jurisdiction with abundant overlooked geological regions with high mineral potential. Prospector engages proactively with local and Indigenous rightsholders and seeks to develop relationships and agreements that are mutually beneficial to all stakeholders.

On behalf of the Board of Directors,
Prospector Metals Corp.

This press release contains certain "forward-looking statements" within the meaning of Canadian securities legislation, including, but not limited to, statements regarding the Company's plans with respect to the Company's projects and the timing related thereto, the merits of the Company's projects, the Company's objectives, plans and strategies, and other project opportunities. Although the Company believes that such statements are reasonable, it can give no assurance that such expectations will prove to be correct. Forward-looking statements are statements that are not historical facts; they are generally, but not always, identified by the words "expects," "plans," "anticipates," "believes," "intends," "estimates," "projects," "aims," "potential," "goal," "objective,", "strategy", "prospective," and similar expressions, or that events or conditions "will," "would," "may," "can," "could" or "should" occur, or are those statements, which, by their nature, refer to future events. The Company cautions that Forward-looking statements are based on the beliefs, estimates and opinions of the Company's management on the date the statements are made and they involve a number of risks and uncertainties. Consequently, there can be no assurances that such statements will prove to be accurate and actual results and future events could differ materially from those anticipated in such statements. Except to the extent required by applicable securities laws and the policies of the TSX Venture Exchange, the Company undertakes no obligation to update these forward-looking statements if management's beliefs, estimates or opinions, or other factors, should change. Factors that could cause future results to differ materially from those anticipated in these forward-looking statements include the risk of accidents and other risks associated with mineral exploration operations, the risk that the Company will encounter unanticipated geological factors, or the possibility that the Company may not be able to secure permitting and other agency or governmental clearances, necessary to carry out the Company's exploration plans, risks and uncertainties related to the COVID-19 pandemic and the risk of political uncertainties and regulatory or legal changes in the jurisdictions where the Company carries on its business that might interfere with the Company's business and prospects. The reader is urged to refer to the Company's reports, publicly available through the Canadian Securities Administrators' System for Electronic Document Analysis and Retrieval (SEDAR) at www.sedar.com for a more complete discussion of such risk factors and their potential effects

To view the source version of this press release, please visit https://www.newsfilecorp.com/release/151784