May 6, 2021
Scottie and AUX Sign Amalgamation Agreement to Consolidate the Stewart Mining Camp in the Golden Triangle

VANCOUVER, BC , May 6, 2021 /CNW/ - Scottie Resources Corp. (TSXV: SCOT) (" Scottie ") and AUX Resources Corporation (TSXV: AUX) (OTC: AUXRF) (" AUX ") are pleased to announce that, further to their proposed transaction announced on April 12, 2021 , they have signed an amalgamation agreement dated May 4, 2021 (the " Agreement ") pursuant to which a wholly-owned subsidiary of Scottie will amalgamate with AUX and all of the issued and outstanding common shares of AUX following the amalgamation will immediately be exchanged for common shares of Scottie on a one-for-one basis (the " Transaction "). The Transaction will consolidate the contiguous gold-silver exploration assets of Scottie's Cambria Project and AUX's Silver Crown, Independence, American Creek, Lower Bear and Bear Pass Projects, all of which will benefit from operational and geological synergies.

Upon completion of the Transaction, it is expected that the shareholders of AUX will hold approximately 31% of Scottie's issued and outstanding shares. The board of Scottie will remain the same.

Anticipated Benefits of the Transaction

"The 2021 field season will be a transformative one for the combined company as we aggressively advance the total land package with a combined 16,000 metres of diamond drilling coupled with geophysics and property scale geochemical surveys," comments Brad Rourke , Chief Executive Officer of Scottie. "Due to the complementary land packages, consolidation of Scottie and AUX is a clear value add for shareholders in both companies." 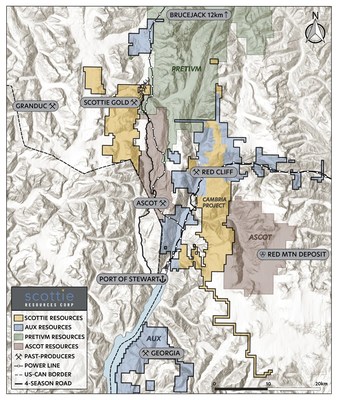 Board of Directors' Recommendation

The Board of Directors of AUX (with the exclusion of Mr. Rourke, who also serves as a director of Scottie) have determined that the Transaction is in the best interests of AUX and have approved the Transaction. Further, AUX's Directors and certain shareholders have entered into voting and support agreements to which they have agreed to vote their AUX shares.

Pursuant to the terms of the Agreement, the Transaction is expected to be completed by way of a three-corner amalgamation under the provisions of the Business Corporations Act ( British Columbia ) whereby 1302688 B .C. Ltd. (" Subco "), a wholly-owned subsidiary of Scottie, will amalgamate with AUX and all of the issued and outstanding common shares of AUX following the amalgamation will immediately be exchanged for common shares of Scottie on a one-for-one basis. Warrants and options of AUX will be exchanged into warrants and options, respectively, of Scottie.  Closing of the Transaction is subject to a number of customary conditions being satisfied or waived by one or both of Scottie and AUX, including the receipt of AUX shareholder approval, together with any requisite minority approvals, and the receipt of all necessary regulatory approvals, including the approval of the TSX Venture Exchange.

Scottie's focus is on expanding the known mineralization around the past-producing mine while advancing near mine high-grade gold targets, with the purpose of delivering a potential resource. All of Scottie's properties are located in the area known as the Golden Triangle of British Columbia which is among the world's most prolific mineralized districts.

AUX holds more than 27,000 hectares of strategic claims in the Stewart Mining Camp in the Golden Triangle of British Columbia , which is among the world's most prolific mineralized districts, including the high-grade Georgia Project and the past-producing Georgia River Mine. The Georgia River Mine, which last operated in 1939 with a head grade of 23 g/t gold, contains 1.2 kilometres of underground access on three levels.

The technical disclosures in this release have been read and approved by Dr. Thomas Mumford , Ph.D., P.Geo., a qualified person as defined in National Instrument 43-101.

Neither the TSX Venture Exchange nor its Regulation Services Provider (as that term is defined in the policies of the TSX Venture Exchange) accepts responsibility for the adequacy or accuracy of this release.  This news release includes forward-looking statements that are subject to risks and uncertainties. All statements within, other than statements of historical fact, are to be considered forward looking, including, but not limited to, statements regarding the entering into of a definitive agreement between Scottie and AUX, the timing of the AUX shareholder meeting and approval of AUX shareholders, closing of the proposed Transaction and the anticipated benefits of the Transaction. Although Scottie and AUX believe the expectations expressed in such forward-looking statements are based on reasonable assumptions, such statements are not guarantees of future performance and actual results or developments may differ materially from those in forward-looking statements. Factors that could cause actual results to differ materially from those in forward-looking statements include market prices, exploitation and exploration successes, continued availability of capital and financing, and general economic, market or business conditions and regulatory, shareholder and administrative approvals, processes and filing requirements.  There can be no assurances that such statements will prove accurate and, therefore, readers are advised to rely on their own evaluation of such uncertainties. We do not assume any obligation to update any forward-looking statements.