Vancouver, British Columbia--(Newsfile Corp. - June 3, 2022) - Mountain Boy Minerals Ltd. (TSXV: MTB) (OTCQB: MBYMF) (FSE: M9UA) ("Mountain Boy" or the "Company") reports that results from the geophysical survey further supports the large-scale porphyry potential of the project. Information from the SkyTEM survey flown last fall has been interpreted together with results from work in the early 1990s and from two field seasons by MTB geologists.

"The SkyTem results supplement the information from the field work, supporting the premise that the widespread copper and gold values at Southmore could be related to a porphyry system", noted Vice President Exploration Lucia Theny.

The 50 square kilometre Southmore Project is located in BC's Golden Triangle, in the vicinity of several large porphyry deposits including Galore Creek (Teck - Newmont), Schaft Creek (Teck - Copper Fox), Saddle and Saddle North (Newmont) and the operating Red Chris copper-gold mine (Newcrest - Imperial Metals). The completed portion of the Galore Creek access road is within 10 kms of the property.

The Mountain Boy geological team has compiled results from historic work in the 1990's, field programs in 2019 and 2020 and the SkyTEM airborne magnetometer and electromagnetic survey flown in 2021.

Results from the geophysics are as follows. 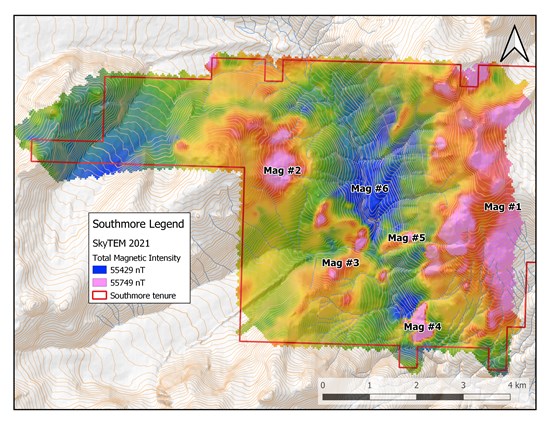 The first style is base and precious metal skarns peripheral to quartz-porphyritic biotite granite of the More Creek Plutonic Suite. The Dundee skarns include garnet. epidote, quartz, potassium feldspar, carbonate with rare pyroxenes and wollastonite. Mineralization comprises massive and veined magnetite with variable amounts of pyrite, pyrrhotite, chalcopyrite, sphalerite, and gold. The westernmost skarn is characterized by semi-massive lenses of pyrrhotite. The Dundee skarns are garnet-rich exoskarns that replace limestone: they differ from many other skarns in the district in being locally pyrrhotite-rich. The 800-metre-long high magnetic anomaly #5 above corresponds to the Dundee skarn and suggests it has some size potential. Magnetic high anomaly #4 with the coincident high conductivity anomaly is interpreted to represent a similar setting and its strength and size is compelling and warrants some detailed prospecting and mapping to confirm the source of the anomaly.

The second style of mineralization consists of structurally controlled precious and base metal mineralization hosted within a large silicified and sericitic northeast striking gossan found in the southwestern part of the property as well as other veins to the north. The southwestern zone is of average magnetic intensity however drapes the northwest side of the #3 high magnetic anomaly and may possibly be a zone of magnetite destruction. No obvious conductivity anomalies are associated with this area, and it is considered a potential buried porphyry target.

The third style of mineralization consists of bedded massive sulphide that has been found in float.

Mountain Boy CEO Lawrence Roulston noted, "Compilation of airborne geophysical data with the historic geological mapping and sampling has provided excellent insight into where future exploration efforts should be directed."

The technical disclosure in this release has been read and approved by Andrew Wilkins, B.Sc., P.Geo., a qualified person as defined in National Instrument 43-101.

On behalf of the Board of Directors:

To view the source version of this press release, please visit https://www.newsfilecorp.com/release/126360