This quarter, UEC announced the formation of a physical uranium inventory initiative by entering into contracts to purchase a total of 1.4 million pounds of US-warehoused U3O8 at a purchase price of approximately US$29 per pound.

It’s a strategy that’s quickly gaining industry traction as it allows firms like UEC to strengthen their balance sheets by way of uranium price appreciation while supporting future marketing efforts with utilities as a means of accelerating future cash flows.

In the case of Uranium Energy Corp. (UEC), it also allows the company to free up its future projected domestic production for the newly-established $1.5B US Uranium Reserve.

UEC’s most recent balance sheet initiatives — which have the company extraordinarily well-funded with over $90 million in cash and equity holdings — have been very well received by the market with UEC shares more than tripling in value in less than six months from US$0.80 per share to currently just below US$3 per share. 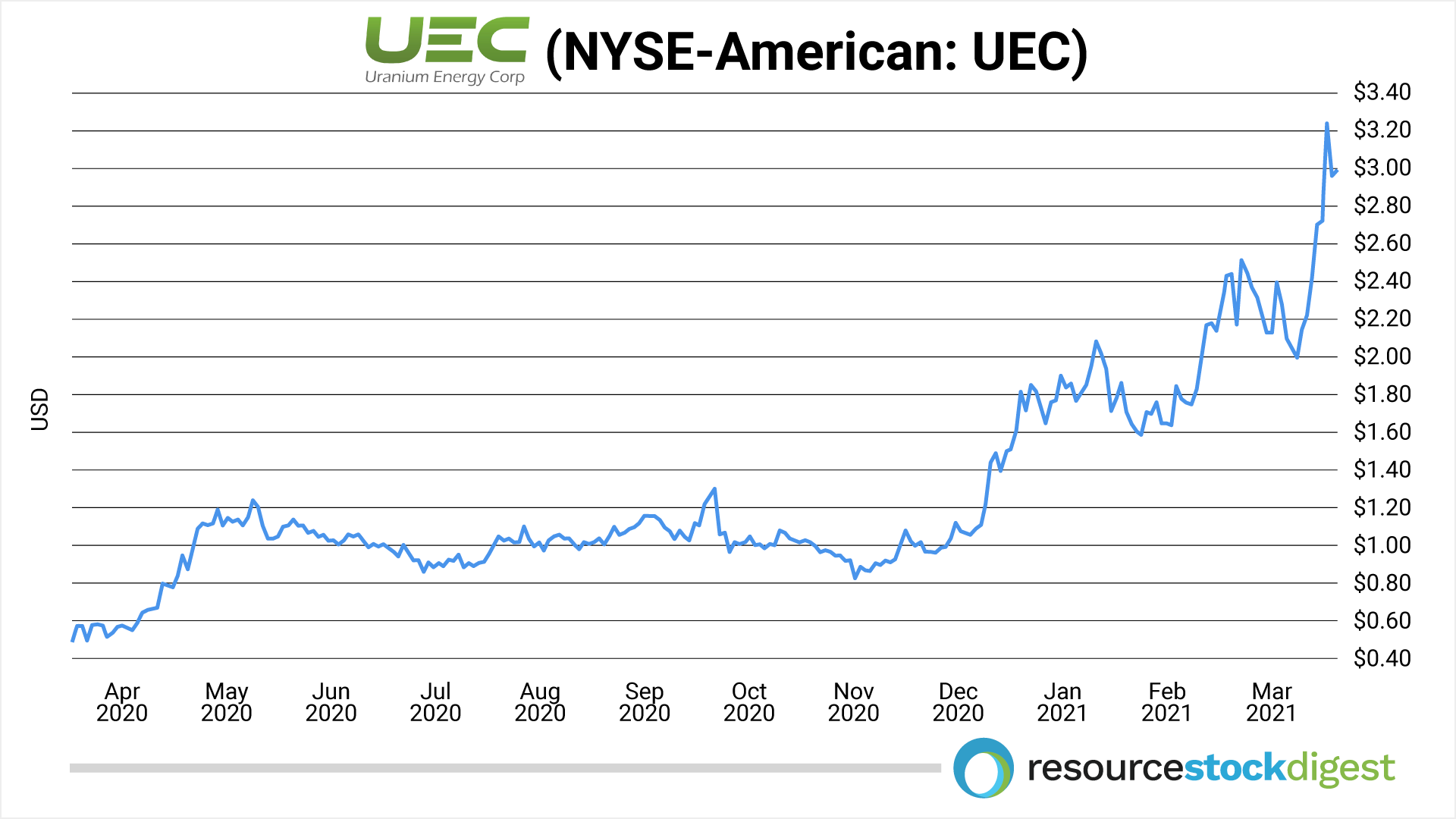 And the uranium spot price? Well, it too has been receiving that widely-anticipated shot-in-the-arm with momentum building from the recent $27 per pound level to a strong push toward the critical $30 per pound mark.

Last week, Scott Melbye — UEC’s Executive VP and current President of the Uranium Producers of America — provided his testimony to the US Senate Committee on Energy & Natural Resources stating, in part:

“This is an exciting time for nuclear, which is already providing electricity to 1 in 5 American homes and over half of our nation's carbon-free power.  Nuclear power can work hand in hand with other green technologies, like wind and solar, to help advance the American clean energy revolution.  But the United States must re-establish its global nuclear leadership, including a robust nuclear fuel cycle that has been eroded by Russia, China, and state-owned uranium entities in recent years.”

That same day, H.C. Wainwright & Co. reiterated its Buy rating on UEC shares while raising its target-price from US$3.60 to US$5.00 per share. The firm cited expectations of global developments driving higher future uranium prices to eventually support favorable production decisions at one or more properties in UEC's portfolio of uranium exploration and development assets.

Led by CEO, Amir Adnani, and chairman and former US Energy Secretary, Spencer Abraham — Uranium Energy has blossomed into a leading pure-play American uranium company with a focus on advancing the next generation of low-cost and environmentally-friendly ISR (in-situ recovery) uranium projects.

In South Texas, UEC’s hub-and-spoke operations are anchored by its fully-licensed Hobson Processing Facility which is central to the firm’s Palangana, Burke Hollow, Goliad, and other ISR pipeline projects.

Additionally, the firm’s diversified holdings provide exposure to a unique portfolio of uranium-related assets, including:

With no less than four fully-permitted ISR uranium projects on US soil with a 4 million pound per year production profile — now is an opportune time to be taking a closer look at UEC as a potential future leader in America’s resurgent uranium sector.

Click here for our newly-updated report on Uranium Energy Corp.