Dr. Shane Ebert , VP Exploration, commented: " Hole S21-228 is a vertical step out hole on the southeastern side of West Seel. The hole encountered a large, continuous zone of strong mineralization over 585 metres, ending in strong mineralization hosted within the deep West Seel intrusive. This intercept extends known mineralization up to 175 metres to the southeast in the lower portions of the deposit and represents the deepest zone of continuous strong mineralization encountered to date at West Seel, significantly opening the deposit for further expansion both at depth and laterally to the southeast. Mineralization in the hole occurs both within a large intrusion that contains potassic alteration and strong quartz veining, and in volcanic, sedimentary, and intrusive rocks overlying the intrusion. The projection of this mineralized contact and intrusion to the northwest and southeast provides the company with a very large and compelling exploration target. Pending results from holes S21-231, S21-233, and S21-239 will help understand the expansion potential of West Seel in these directions. Further stepouts to the southeast in this area will be a priority when drilling resumes in the summer. "

The winter 2021 drill program at Ootsa has been completed with 20,028 metres drilled in 27 holes. Drilling is scheduled to resume in late May to early June following spring breakup and snow melt in the area.

Holes S20-226 and 228 both tested the West Seel deposit. Hole S20-226 was drilled at an azimuth of 208, a dip of -50 degrees, to a total depth of 959.4 metres. The hole helps to define the limit of West Seel mineralization to the southwest, returning mineralization from 3 metres depth grading 0.56% copper equivalent over 13 metres, along with 0.36% copper equivalent over 120 metres from 342 metres depth.

Hole S20-228 was a vertical hole drilled on the southeast side of the West Seel deposit to a depth of 795 metres. The hole is shown on Figure 1 and has successfully expanded the West Seel Deposit 175 metres to the southeast with the deposit remaining open for further expansion over a vertical interval exceeding 500 metres. Hole S20-228 returned 0.57% copper equivalent over 585 metres from 210 metres depth, including 0.68% copper equivalent over 164 metres from 272 metres depth.  Mineralization is interpreted to extend laterally above and along the upper contact of the West Seel intrusion, a deep and potentially large intrusive body containing potassic alteration and veining. 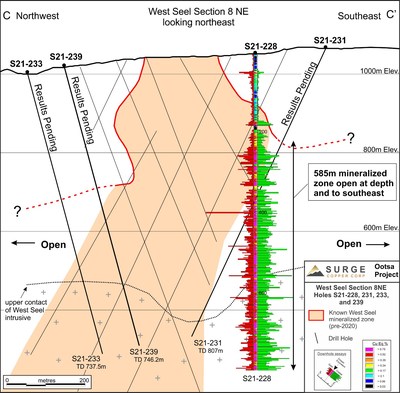 Hole S20-222 returned a high-grade gold intercept of 8.54 g/t over 2 metres from 50 metres depth. This high grade occurs within a larger zone of anomalous gold grading 0.19 g/t gold over 38 metres from 40 to 78 metres depth (averaged with the high grade capped at 2 g/t).

Wide spaced drilling conducted to date at the East Geophysical target shows increasing alteration and intrusive activity toward the south end of the anomaly which remains largely untested and warrants additional drill testing.

The fall 2020 to winter 2021 drilling program has been completed. During the program 20,028 metres was drilled in 27 holes. Drilling is scheduled to resume in late May to early June following spring breakup and snow melt in the area. Assay results for 11 holes have been received and released. A further 16 holes have been completed, processed, and submitted to the lab for assay with results pending. Figure 2 shows the locations of the 2020-2021 drill holes. 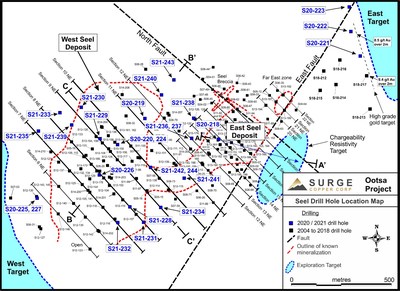 All drill core is logged, photographed, and cut in half with a diamond saw. Half of the core is bagged and sent to Activation Laboratories Ltd. in Kamloops, British Columbia for analysis (which is ISO/IEC 17025 accredited), while the other half is archived and stored on site for verification and reference purposes. Gold is assayed using a 30g fire assay method and 37 additional elements are analyzed by Induced Coupled Plasma (ICP) utilizing a 4-acid digestion. Duplicate samples, blanks, and certified standards are included with every sample batch and then checked to ensure proper quality assurance and quality control.

Dr. Shane Ebert P.Geo ., is the Qualified Person for the Ootsa project as defined by National Instrument 43-101 and has approved the technical disclosure contained in this news release.

The Company is also earning into a 70% interest in the Berg Property from Centerra Gold. Berg is a large, advanced stage exploration project located 28 km northwest of the Ootsa deposits. Berg contains pit constrained 43-101 compliant resources of copper, molybdenum, and silver in the Measured and Indicated categories. Combined, the adjacent Ootsa and Berg properties give Surge a dominant land position in the Ootsa-Huckleberry-Berg district and control over four advanced porphyry deposits.

On Behalf of the Board of Directors

This News Release contains forward-looking statements, which relate to future events. In some cases, you can identify forward-looking statements by terminology such as "will", "may", "should", "expects", "plans", or "anticipates" or the negative of these terms or other comparable terminology. All statements included herein, other than statements of historical fact, are forward looking statements, including but not limited to the Company's plans regarding the Berg Property and the Ootsa Property.  These statements are only predictions and involve known and unknown risks, uncertainties and other factors that may cause the Company's actual results, level of activity, performance or achievements to be materially different from any future results, levels of activity, performance, or achievements expressed or implied by these forward-looking-statements. Such uncertainties and risks may include, among others, actual results of the Company's exploration activities being different than those expected by management, delays in obtaining or failure to obtain required government or other regulatory approvals, the ability to obtain adequate financing to conduct its planned exploration programs, inability to procure labour, equipment and supplies in sufficient quantities and on a timely basis, equipment breakdown, impacts of the current coronavirus pandemic, and bad weather. While these forward-looking statements, and any assumptions upon which they are based, are made in good faith and reflect the Company's current judgment regarding the direction of its business, actual results will almost always vary, sometimes materially, from any estimates, predictions, projections, assumptions or other future performance suggestions herein. Except as required by applicable law, the Company does not intend to update any forward-looking statements to conform these statements to actual results.