Coverage made possible by the sponsorship of our featured companies: Click here to see more about Rockridge Resources Ltd.

Gerardo Del Real: This is Gerardo Del Real with Resource Stock Digest. Joining me today is the Senior Vice President of Corporate Development at Rockridge Resources, Dr. Andrew Ramcharan. Andrew, how are you today, sir? 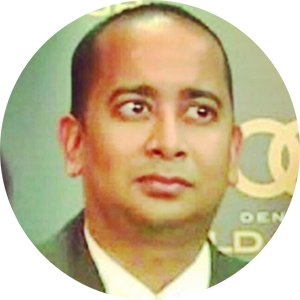 Andrew Ramcharan: Thank you very much Gerardo for having me on the show here. I'm very happy to chat with you.

Gerardo Del Real: It's great to have you on. Rockridge has gone through a bit of a quiet period where the company has been very busy behind the scenes, but publicly and in the markets, speculators always like news and you had some earlier today and that was the reason for me reaching out. You commenced your fully funded drill program at the high grade Knife Lake copper project. Now, I want to talk about a few points, the main ones being that you're drilling outside of the resource area and I know that privately the company is really enthusiastic about quickly adding pounds through a discovery to the existing resource, but before we get into that, I'd love for you to just kind of give us a brief primer on your background and your success and kind of what attracted you to Rockridge. You came on here in January, if I'm not mistaken.

Andrew Ramcharan: Yes that's correct. So I started my mining career about 22 years ago in Northern Ontario. So I worked on the Dynatec FNX joint venture and at that time I basically worked in the mines. So I'm one of the guys who can say, I actually worked in the mines and helping putting McCreedy and Levack into operation. And then I moved to the U.S. where I worked in Resource Capital Funds and SRK Consulting. So that's when I was doing a lot of project evaluation, both on a technical and financial side, looked at a couple hundred projects around the world in my lifetime. And a lot of people know me as one of the Gold bull guys, but I actually made more of my income from copper because I traded a lot of good copper stuff. I worked on numerous copper projects in the Congo, in Chile, and elsewhere around the world.

Recently I was with IAMGOLD doing mergers and acquisitions for quite a number of years, and then was with Sprott managing director on the lending side and the equity side, looking at project evaluation for financing. My recent run was with a junior in West Africa. And over my period there, the share price went from like eight, nine cents to about 64 cents in a 14 month period. And I've raised a couple of hundred millions of dollars and deployed money globally. So when I saw this opportunity on the copper frontier and what's happening in the world, definitely I think we are in a run soon for a copper price increase. And seeing the Knife Lake project and Rockridge, and Rockridge do have a gold project too in Northern Ontario, close to IAMGOLD and Newmont's project onboarding there too. But the Knife Lake project basically is one that reminds me a lot of Foran mining. And I think this could be something of significant value in a very short time, which I'll get into details later.

Gerardo Del Real: So that's a lot of success for someone who is joining a company that has a market cap of $9 million, right? It's interesting to me that you see an opportunity at this early stage because we know the space, right? Nothing happens for a long time and then things can turn around really, really quick. Let's talk about Knife Lake, and let's talk about the new Gilbert Lake zones, because I mentioned the $9 million market cap because frankly it's minuscule given the fact that the project is in a top tier jurisdiction, it's already had a resource established and then clearly the type of deposit, this is the VMS deposits, those don't tend to happen in isolation , they tend to happen in clusters. Right? Talk to me about the upcoming drill program there.

Andrew Ramcharan: No, definitely. I think you nailed it there. These VMS systems normally occur in clusters and getting to the source of one of these could be very significant. And what happened last year and earlier this year, we've been doing a lot of work behind the scenes and we are just about to complete our VTEM Geophysics 3D modeling. We have narrowed down to a few of the plates that we are going to be modeling, which basically have such in refining our drill program. So what we are doing, we’re targeting the Gilbert Lake area and the Gilbert Lake area was not something that just came about. We've been working on this and we've been doing a lot of geochemical work. Now with the geophysics work, we did a few drillings there. So we see this as a high priority for this year's drill program.

And we envisage that this could be leading us onto something that potentially could be a new discovery. And as you mentioned, these things just do not occur on their own. So we are very excited about the drill program. And one key thing to note here, Gerardo, is that in this neck of the woods, logistics has to be an important and vital role in the drill program. So it's not like you just pick the drill up and you go and you start drilling. So, with inflation and what's going on in the world and short supply of everything, we already have the drill contract signed, the helicopter contract signed, the contracts for the camp builder to all get ready. So we have a lot of mechanisms in place already to ensure that there's no delays or there's anything that can cause any delay, because we see this as we’re hitting the market at the right time, because I strongly believe that copper price is an upward trend.

And you mentioned about the smaller market cap and yes, while I agree, I see the value proposition here. And I strongly believe too that consolidation in the area will occur because as you advance these projects, you quickly recognize the CapEx, the bill, a refinery and mills for these kind of deposits, it's not going to be very small. And it keeps reminding me of the story of Foran. Foran, a number of years ago was very, very tiny, they made some turnarounds, and they're about over $500 million market cap today.

So we are very excited about our upcoming drill program. We have a better understanding of a bigger part of the land package. And I always like to stress while we are just touching the surface, we do have a lot of land package that's untouched and was never discovered. So being in a safe jurisdiction, we have a solid couple hundred, over 200 million pounds of copper at Knife Lake. We potentially onto something here and we have massive exploration upside. We believe these are all the ingredients for nice copper price run up, to add significant value to shareholders. So I do see the value proposition here, and I don't think it's going to be much longer a nine, ten million market cap company.

Gerardo Del Real: It's called buy low, sell high. You can't do one without the other. Andrew, thank you so much for coming on. That's how you made your money in this space, that's why you've been successful, that's why I wanted to have you on. Is there anything else that you'd like to add Andrew?

Andrew Ramcharan: There's one thing I always like to do, under promise and over deliver too. Under promise, over deliver, let the result speak for itself and things will fall into place.

Gerardo Del Real: Well, let's go ahead and have this conversation in a couple of months. It's a fully funded drill program. Nothing excites the market like a new discovery. Good luck out there and we'll chat soon.

Andrew Ramcharan: Thank you very much, Gerardo. It's a pleasure. I hope to see you at PDAC.

Gerardo Del Real: We'll absolutely see you at PDAC. And I encourage anybody that's looking for a quality copper exploration story, in a top tier mining jurisdiction with an already pretty robust resource to stop by the Rockridge booth and have a conversation. It's a great technical team. It's a team with deep capital markets experience and I agree, I don't think it sits at a $9 million market cap for very much longer. Thanks again, Andrew.

Andrew Ramcharan: Thank you very much. Have a good day.