Coverage made possible by the sponsorship of our featured companies: Click here to see more about Alianza Minerals Ltd.

The Critical Investor does a deep dive into this explorer's drill program at its Yukon silver project.

All cashed up after raising C$1.1 million in an oversubscribed financing in July, Alianza Minerals Ltd. (ANZ:TSX.V) was ready for its 2019 Phase II drill program at its flagship Haldane silver project, after the Phase I drill target defining program was completed earlier this summer, and drilling began in late August. The main focus for management were the new stepout targets like the Bighorn and Ross anomalies, and the extension of Mount Haldane Veins System (MHVS) targets, to indicate size potential, and are presented in red below: 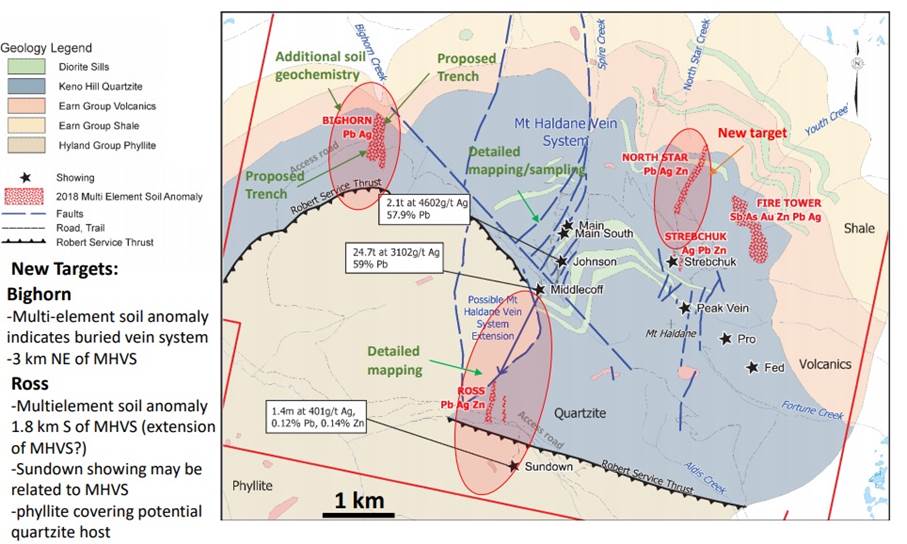 A total of 963 meters was cored in four holes. It took quite a while, according to management the assay lab was relatively slow, an issue several explorers are dealing with this year.

On October 22, 2019, the company reported drilling had confirmed the presence of new silver-bearing vein targets at the Bighorn Zone. The first two holes of the program tested the Ross and Bighorn targets. One hole was completed at each of the Ross and Bighorn anomalies, with two holes targeting the A and B veins of the Middlecoff Zone in the Mt. Haldane Vein System target area. 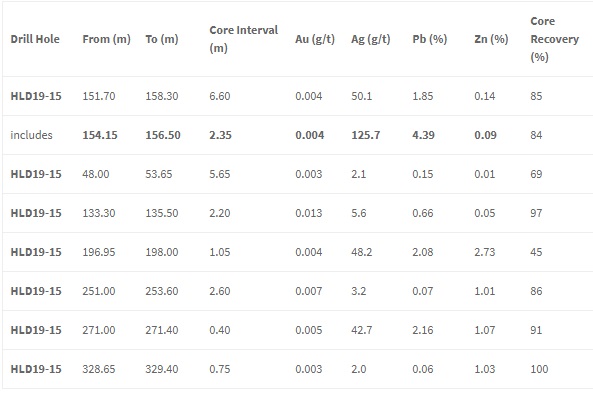 In itself this is not an economic intercept, as it would be a gold equivalent of 2.35m @ 3.5g/t AuEq (for underground, 5-6g/t Au at 2m wide at least is considered economic), but the fact it hit this kind of mineralization that far out of known mineralization is considered promising by management.

The hole HLD19-14 at the Ross anomaly did intersect zones of anomalous veining and disseminated mineralization in rocks overlying the prospective lower Keno Hill quartzite unit, but didn't return significant values. It is believed by management that these are the manifestation of the target structures and that they may form cohesive veins at depth in the permissive units. According to the news release:

"The first hole of the program tested the Ross Anomaly, a 300m by 100 m Pb-Zn-Ag soil anomaly, approximately 3 km along trend from the Middlecoff Zone on the Mt Haldane Vein System. The anomaly sits in schist and phyllite of the Upper Keno Hill Formation (Sourdough Member) in the immediate hanging wall to the contact with the Lower Keno Hill quartzite."

For some more understanding of geological concepts, here is an image explaining the concept of a hanging wall, at the same time describing four different basic fault concepts: 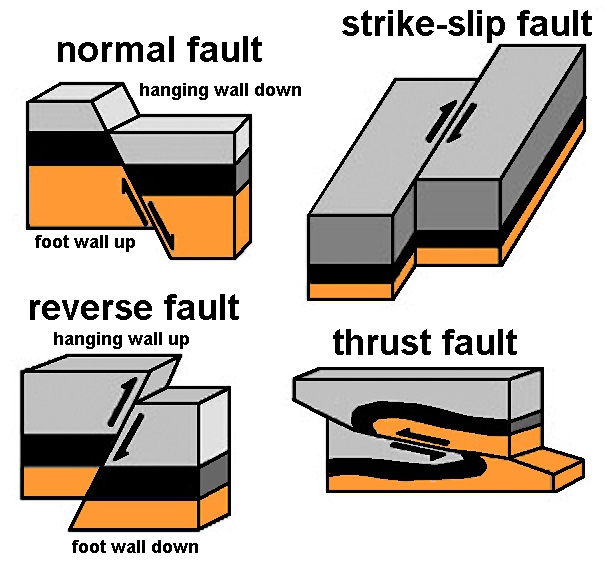 "The Lower Keno Hill consists of massive quartzite and phyllitic quartzite, which are much better hosts for the vein-fault style of mineralization present on the Haldane Property and elsewhere in the Keno Hill District.

The hole intersected quartzite below 180 m suggesting the initial target may exist deeper on the section."

As there is quite a bit of faulting going on at Keno Hill, this might very well be the case. CEO Jason Weber had the following to say about the first results: "The first-ever drill hole at the Bighorn Zone, almost three kilometers from known mineralization, successfully intersected at least four mineralized structures confirming a new zone for systematic follow-up drilling. The Ross hole, which also tested a new area, returned only anomalous lead and silver values, but appears to have intersected weak structures that may be conducive to forming veins in the more brittle Lower Keno Hill Quartzite that lies below."

After asking a bit further about Ross, Jason commented: "It was great to get the result at Bighorn, and a bit frustrating that we were in the wrong rocks at Ross to form veins, but it looks like potential vein structures are located deeper here so the target isn't dead at all. These results weren't bad for the first ever holes at these targets. Obviously we would have liked some high-grade intersections but it is a great start nonetheless."

Of course this is pure exploration, you look for all kinds of indicators of mineralization, you theorize about geological and mineralized concepts, you drill, you get new data, you fine tune or even overturn your original thesis, and you continue, until the target is killed or you hit economic mineralization. To me this is a solid start, as Alianza hit mineralization at three out of the first four holes. For comparison, the famous Hemlo and especially Eskay deposits were found only after dozens and dozens of drill holes, at the 76th and 109th attempt respectively to be precise.

At the Bighorn Zone, hole HLD19-15 was drilled from west to east near the center of the 900m by 150m, north-south trending, Pb-Ag-Sn soil anomaly.

The drill hole intersected four significant north trending, steep faults, plus several smaller faults all with associated mineralization. The most significant of these faults occurred at 150–159m depth. This fault appears to correlate with a silicified breccia/fault zone on surface. I consider this as a very interesting indication of mineralized zones extending to surface, and this zone is of course also still open at depth. Management believed that locally poor core recovery within these faults may have negatively impacted some results, but as far as I can see this doesn't seem to occur often or at relatively long intercepts.

On November 1, 2019, the second batch of results of two holes was released. Holes HLD19-16 and HLD19-17 targeted the Middlecoff Zone along strike from a high-grade silver-bearing vein that had seen some interesting historical underground sampling at an average of 775 g/t Ag over 13.7 meters of strike in the past. Hole HLD19-16 targeted this zone along a shallow plunge and intersected significant mineralization in the Middlecoff Zone from 110.30 to 125.00 meters downhole. 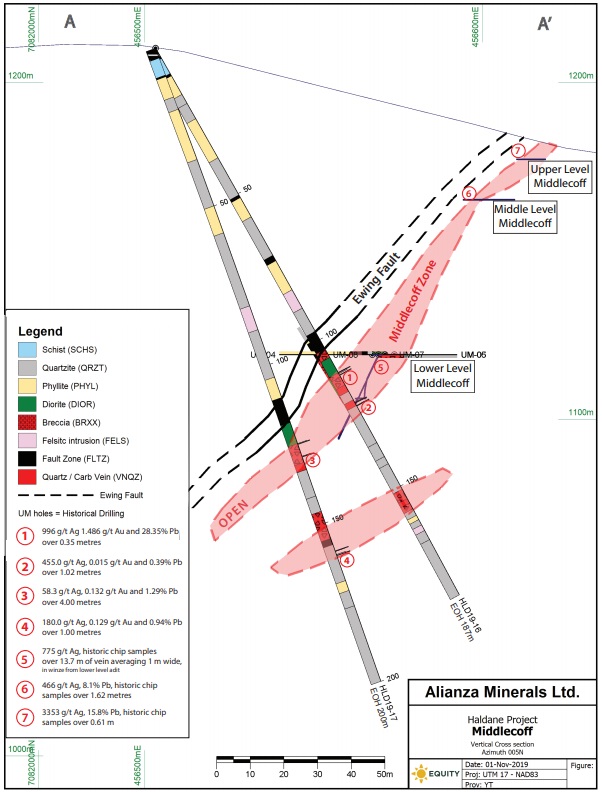 The highlight here obviously was a very narrow but also very high grade 0.35m section of 996 g/t silver and 1.486 g/t gold. To put this in perspective, in order to mine underground a rule of thumb is that conventional mining equipment needs at least 2m to operate effectively, as already hinted on earlier. In this case it would mean a gold equivalent of 2m @4.3g/t AuEq, so it is still not economic, but it is a promising start for such a stepout. I liked the other intercepts a bit deeper as well, which seem to indicate fairly consistent dispersion of about 400-450g/t Ag over 1m normalized on average, which can be seen in this table of results for HLD19-16 and HLD19-17: 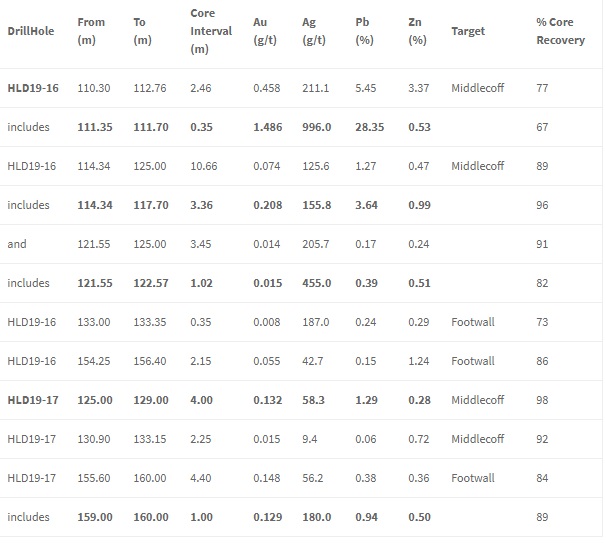 Hole HLD19-17 intersected a geologically similar section below the Ewing fault, but structures and veins are not as well-developed as in hole HLD19-16. The returned results were less significant as well, suggesting in my view less potential going at depth in this particular location. However, the Middlecoff vein–faults intersected in the current drilling and limited historical underground workings remain very much open to depth and in both directions along strike below the Ewing Fault.