Labrador Uranium Inc. (CSE: LUR) — which was spun out of Consolidated Uranium in Q1 of this year — has commenced active trading on the Canadian Securities Exchange under the symbol LUR.

The company’s stock is currently trading right around C$0.80 per share.

Labrador Uranium is focused on the consolidation, exploration, and development of uranium projects primarily in the Central Mineral Belt (CMB) of Labrador, Canada — a very significant mineralized zone measuring 260-km-long by 75-km-wide and overlying the junction of four major geological provinces. 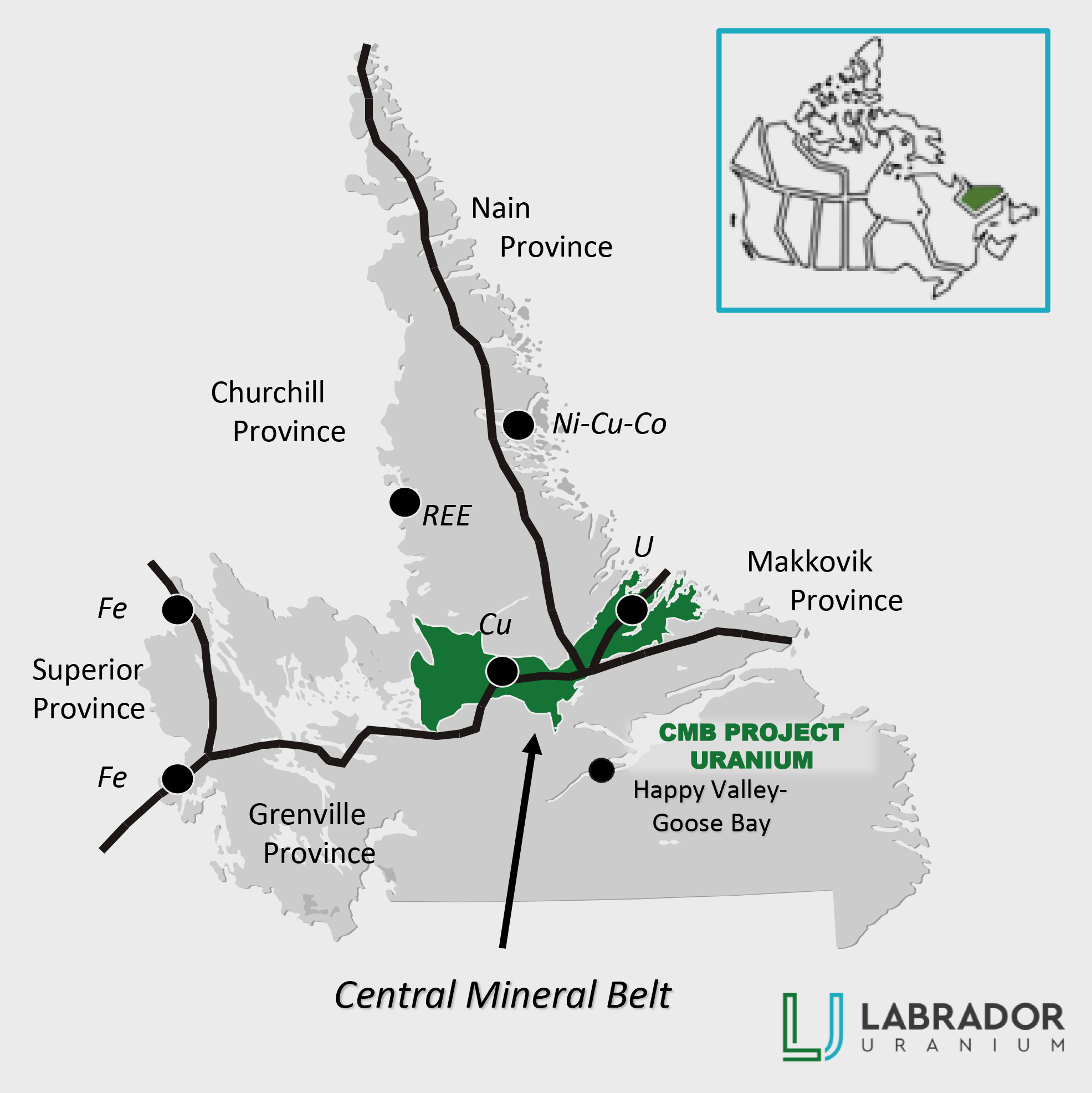 The CMB is a district-scale uranium camp with multi-commodity exploration potential including vanadium plus iron ore, copper, gold (IOCG).

LUR’s flagship is the Moran Lake Uranium-Vanadium Project, which has a historic resource and has seen more than C$25 million of historic exploration work. Uranium mineralization in the area is structurally controlled, typically hosted within fracture systems and to a lesser extent within shear zones.

The company has also entered into a purchase agreement with Mega Uranium to acquire the CMB-hosted Mustang Lake Project nearby to Paladin Energy’s Michelin deposit (~100M lbs U3O8). Mustang Lake is composed of three primary uranium prospects — Mustang Lake, Irving Zone, and Mustang Lake North — and is characterized by the presence of numerous radioactive boulders plus mineralized outcrops with potential for IOCG-style mineralization.

Speculators can view Labrador Uranium as an early-stage exploration story but with nearly half-a-century of mineral exploration data from various companies to draw upon.

By way of that massive database — along with the advanced machine-learning and in-company expertise the LUR team brings — Labrador Uranium has identified more than 140 targets across its expansive property portfolio and is currently putting together a comprehensive exploration plan (see video) for summer 2022 for select, high-priority targets.

In addition to Moran Lake and Mustang Lake, the LUR team is focused on advancing the 3,000-hectare, drill-ready Notakwanon Uranium Project (north of the CMB), which was originally discovered by Altius Minerals. The property hosts more than twenty known uranium occurrences, at-surface, up to 3.5% U3O8. LUR is currently in the permitting process with plans to get the drills turning this summer.

Labrador Uranium, Inc. — at approximately 50 million shares outstanding — is well-funded having recently raised ~C$10 million via private placement. Led by CEO and mining engineer, Stephen Keith — whom you’re about to hear from directly — the company has assembled a top-notch technical team with decades of combined experience in the uranium and mineral exploration sector.

Our own Gerardo Del Real of Junior Resource Monthly caught up with Mr. Stephen Keith for a fascinating discussion on all-things Labrador Uranium. Enjoy!