Maurice Jackson of Proven and Probable discusses the latest news from Millrock Resources with the company's CEO.

Maurice Jackson: Today we will provide an update on Millrock Resources Inc. (MRO:TSX.V; MLRKF:OTCQB), as we will discuss their initial assay results on the Aurora targets located in the prolific Tintina gold province in Alaska. Joining us for our conversation is Gregory Beischer, the CEO of Millrock Resources.

Gregory, for someone new to Millrock Resources, please introduce the exciting opportunity the company presents to the market and, in particular, the 64 North Project.

A lot of money is spent looking for new gold and copper deposits, but discoveries are pretty rare. But it looks like Millrock might be onto something at the 64North Project where we're drilling just to the west of the Pogo gold mine.

Maurice Jackson: And speaking of that, can you walk us through the Aurora target? 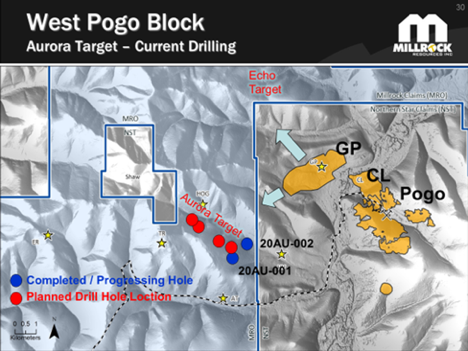 Gregory Beischer: The Aurora target is just to the west of the Pogo gold mine and the Goodpaster deposit. The letters GP indicate the Goodpaster deposit. That's in our neighbor's ground, Northern Star Resources Ltd. (NST:ASX), and our ground is shown in blue. The dark blue dots on the map are the approximate locations of the two holes we've drilled so far, and the red ones are ones that are planned for the immediate future.

We did complete hole 20AU-001, and we got started on hole 2, but as announced previously, the drill contractor elected to pull off in light of the risks posed by the coronavirus and potential travel restrictions that might have trapped his drillers here in Alaska. They're from Idaho.

So prudence was the right thing, and so it was best to pull off. But now we know that we can go back soon and we're quite anxious to drill hole 2 to its planned depth of 600 meters. We stopped that at 194 meters.

Maurice Jackson: Readers should note that Millrock Resources [was] about 25% into the drill program, and then, as COVID-19 approached us, drilling had to stop. So based on that, can you share with us the assay results?

Gregory Beischer: Yes. We did produce the assay results for the top two-thirds of Hole 1, and I'll be frank and say, Maurice, that we had hoped for better. Honestly, looking at the drill core, it was quite well altered with dolomite and cerussite, telling us that a lot of fluid had moved through the rock and we'd seen the typical pathfinder minerals, pyrite and arsenopyrite, and eased within a little bit of bismuth sulfide—which is a very good indicator, next door at Pogo, that you're in or close to a gold deposit. 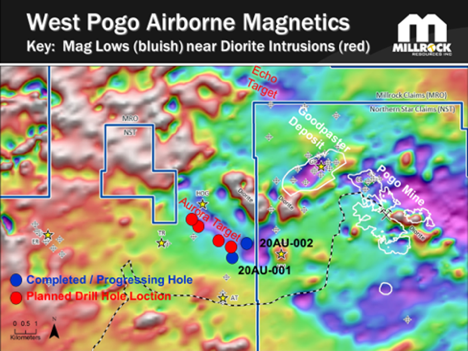 We had rather expected higher gold values but we didn't get them. So it's a geological problem that we have to solve and we do know a couple of things.

In many ways this hole, even though it didn't have the gold grades that we all hoped for, did have a lot of good signs. We know now that the shear zone that we targeted is the same shear zone, we believe, that hosts the Pogo mine and the Goodpaster deposit next door. It comes over on to Millrock's claims. It's a shallow, northwest-dipping fault zone, which we thought we had detected through geophysical methods and now that's confirmed. We drilled through the conductive zone, observable through the geophysical survey, and sure enough, the rocks were faulted and were mineralized with a little bit of quartz and pyrite and arsenopyrite. We know now that this geophysical tool works and we can, therefore, plan our hole depths accordingly, and we can work our way drilling holes, piercing that fault sound in various places and thereby get a vector toward the gold-bearing part of the system.

Maurice Jackson: You somewhat alluded to my next question. Based on the results, are there any changes that will be made in the drill program based on what we know right now?

Gregory Beischer: Not as it stands right now, no. We'll continue with the plan. These holes are spaced out a little ways. The next one we'll drill actually is one immediately to the north of Hole 1 that's about 450 meters away, and it's closer to a potential heat source—a magmatic intrusion that perhaps would have some control on where gold is deposited. So it'll be interesting if we get a vector. If the gold grade starts to increase as we drill holes for the two north, that'll be a good sign and we'll continue to follow up that way. So that's the plan and the plan is to get back to work pretty soon.

Maurice Jackson: Can you walk us through the strip log?