How Coal is Spurring Clean-Energy Gains

Coal is a dirty word.

Net zero means that any and all emissions are balanced — or zeroed-out — by absorbing an equivalent amount from the atmosphere.

In order to meet the 1.5°C global warming target outlined in the Paris Agreement, global carbon emissions should reach net zero by around mid-century.

Yet, with all the hollow talk from world “leaders” — this week’s Economic Summit in Davos, Switzerland, immediately comes to mind — one can only wonder if we’ll ever truly get there.

With so many energy firms patting themselves on the back for their supposed ESG achievements… you may be surprised to learn that 2021 was a record year for global coal sales.

And 2022 is already on-track for yet another record year for coal demand.

Against that inauspicious backdrop, it’s becoming increasingly difficult to envision any scenario where we actually attain net zero emissions, especially considering the fact that coal is the single-largest source of electricity generation worldwide — at around a 40% clip.

Of course, Asia dominates the global coal market with China and India accounting for two-thirds of overall demand.

Remember these skylines from the 2008 Beijing Olympics? 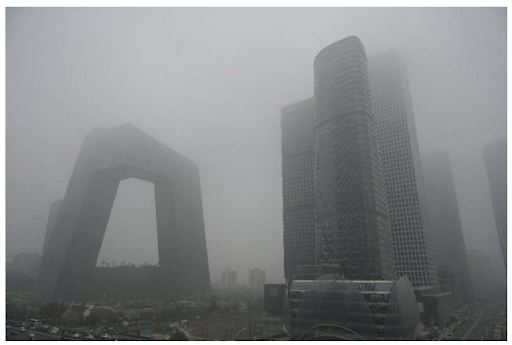 Between China and India alone, we’re talking nearly 3 billion people, with millions being ushered out of poverty every single year.

Unfortunately, for those of us who prefer to breathe clean air, coal is the cheapest and easiest way to get the lights on for these people.

I think it’s safe to say that most everyone wishes for a greener energy future with crystal-clear blue skies for our children and grandchildren… along with the belief that we are at least somewhat on the proper path.

Yet, with so much talk and so little action of late, what’s more likely to ensue is a perpetual battle between the world’s greenest economies and the world’s biggest polluters.

Net zero may end up just meaning ‘no one truly wins.’

There are silver linings, nonetheless, especially when it comes to emerging investment opportunities in the green-energy space.

EVs are also on the rise… and we’ll get into lithium, cobalt and nickel and the fragility of the supply chain for these critical metals next time.

Nuclear power generation by way of uranium — which is carbon-emission-free — is on the rise globally.

And a lot of that growth, perhaps somewhat surprisingly, is coming from China and India… so that’s a good thing.

India is planning to construct 10 nuclear power plants over the next three years.

China intends to build 150 new nuclear reactors over the next 15 years as part of their newly-enhanced decarbonization mandate.

That's more reactors than have been built in the last 35 years!

Many European countries that were once dead set against nuclear energy — including Britain, France, and Poland — are now onboard with a clean-energy future powered, in part, by uranium or “yellowcake” as it is commonly known.

With Russia’s invasion of Ukraine and the fossil-fuel calamity it’s now fanning across the region… other nations may soon follow suit.

SMRs — which represent a variety of technology options, capabilities, and deployment scenarios — are set to be a key part of America’s clean-energy future.

In other words, powerful tailwinds are now forming for the uranium sector at-large.

Yet, as a result of a full decade of gross underinvestment in the uranium space following Japan’s Fukushima disaster in 2011, global uranium production now stands at just 140 million pounds.

That leaves a deficit of some 50 million pounds, which will have to be made up with freshly-mined uranium.

Another thing you may be surprised to learn is that the United States used to produce all the uranium it needed. That was back in the 1960s through the 1980s.

Today, we produce virtually none.

That’s all changing now. And it has to… especially considering our stark overreliance on uranium imports from countries such as Russia and Kazakhstan.

To that end, the US Department of Energy is currently working on a broad uranium strategy designed to lessen our dependence on rogue nations while simultaneously ensuring a steady supply of uranium to meet our national requirements.

And the only sustainable path forward in that respect involves the revitalization of our domestic uranium industry.

Fortunately, there’s still a lot of uranium yet to be mined from American soil.

At $50 per pound, America’s uranium reserves are estimated at a very robust 540 million pounds. At $100 per pound, that number almost doubles to over 1.2 billion pounds!

Uranium prices are rising as a result.

After languishing in the $20 to $30 per pound range for years… uranium is now well above $45/lb and looks poised to head even higher over the coming quarters.

And that means there’s tons of money to be made by investing in select small-cap uranium exploration firms.

These, after all, are the companies that will ultimately be pulling yellowcake from US soil for US consumption.

Our own Gerardo Del Real knows a thing or two about the uranium industry and has his eye on one particular uranium explorer/developer that’s seeking to corner the US uranium market.

This under-the-radar firm pulled off a key acquisition to start the year and is now rapidly advancing its asset bases in three key US uranium hotbeds: Texas, South Dakota, and Wyoming.

The company’s shares have pulled back in recent trading, which may prove to be an optimal entry-point before the next leg-up in the uranium price.

And with uranium demand continuing to soar in the face of constrained supply… that may be sooner rather than later.