Pursuant to the newly-announced private placement, Teck will subscribe for 9,180,000 common shares of Hannan at a price of C$0.28 per share for gross proceeds to Hannan of approximately C$2.57 million.

The investment by Canada’s largest mining firm comes on the heels of JOGMEC (Japan Oil Gas & Metals National Corp.) announcing a US$2 million budget — from April 2022 through March 2023 — in its ongoing JV with Hannan on the San Martin sediment-hosted copper-silver project in Peru.

In other words, Hannan has successfully attracted investment by two global mining powerhouses on its Peru operations — wherein Hannan is now a top-ten in-country explorer by area in a country that’s dominated by some of the world’s largest exploration and mining companies — before the start of drilling on the company’s massive 2,154 square kilometer mineral package.

“Teck's investment in Hannan is a demonstrable vote of confidence in the technical merits of the Company’s projects as well as our team. Over the last two years Hannan has recognized the significant potential for large copper-gold-silver deposits in Peru and has aggressively staked a large and commanding top 10 tenure position in-country. This bold grassroots strategy has attracted some of the largest industry participants to partner with Hannan, with both Teck and JOGMEC now involved at equity and joint venture levels, respectively. With Teck's involvement, we now look forward to accelerating our exploration efforts at the Valiente project, which is located approximately 20 km east from the township of Tingo Maria in central Peru. Valiente forms a previously unknown Miocene-age mineralized belt within a 140 km by 50 km area, where Hannan's exploration team of six geologists and support team has identified at least seven intrusion related porphyry/epithermal/skarn targets.”

Next up for the Valiente copper-gold exploration project, where drill permitting is underway, is boots-on-the-ground field work, including channel sampling, at the 10-km-long Belen trend where soil sampling has uncovered the presence of an outcropping leached copper-gold porphyry with well-developed alteration and quartz veining. 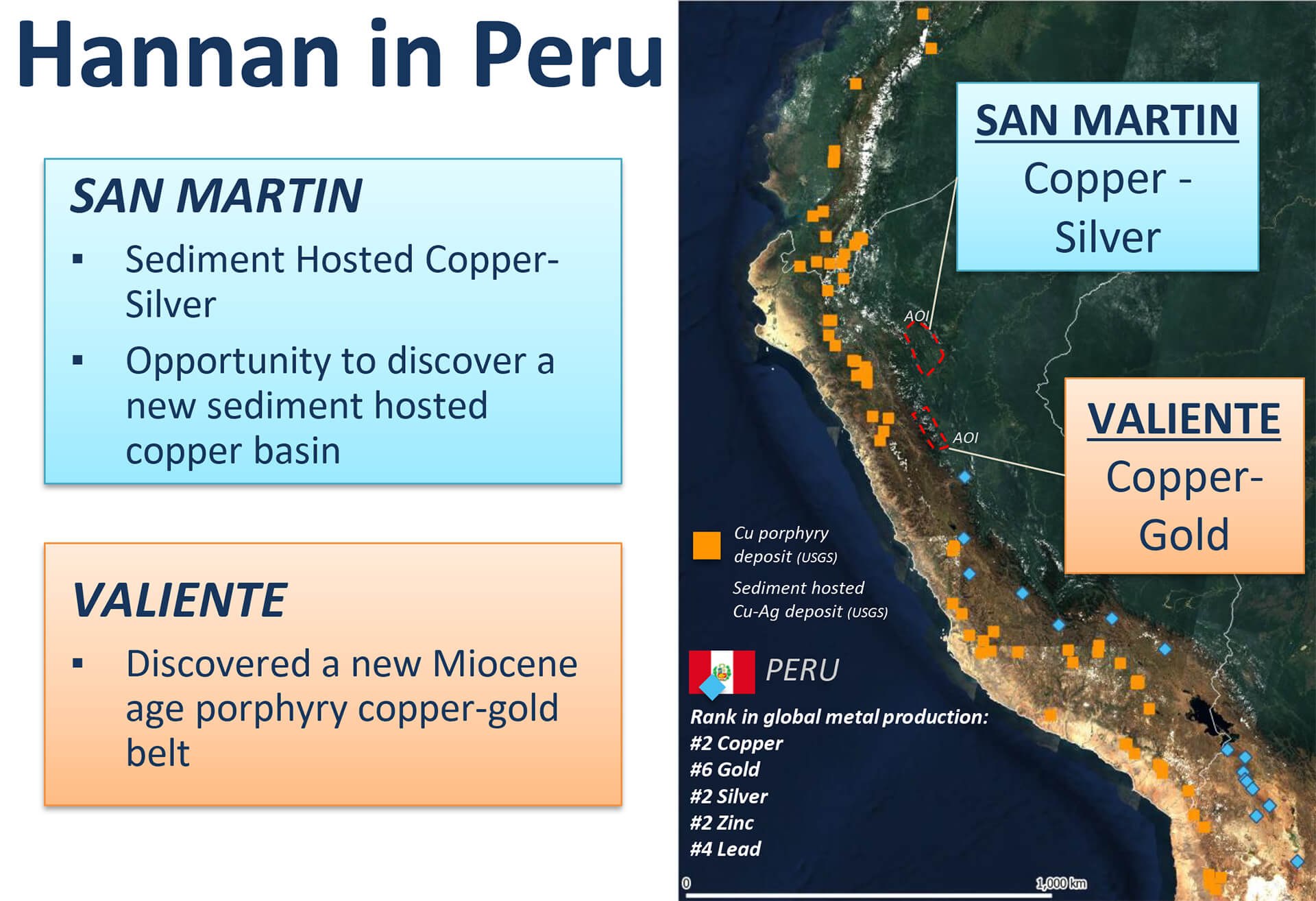 At the San Martin copper-silver project — where JOGMEC has an option to earn up to a 75% interest by spending up to US$35 million culminating in a feasibility study — a phase-one drill program is planned pending approval of the company’s Environmental Impact Statement.

The proposed program is slated for 3,500 meters of drilling at the Tabalosos East target to test for continuity of the surface mineralization mapped and sampled over a 9 km strike length.

As a top-ten in-country explorer by area in Peru, Hannan Metals is poised to deliver a steady stream of news flow as it accelerates its exploration and drill permitting efforts across multiple high-potential, yet vastly underexplored, copper-gold-silver porphyry targets buoyed by strategic investment from Teck and JOGMEC.

Our own Gerardo Del Real of Junior Resource Monthly caught up with Hannan Metals CEO Michael Hudson to go over the Teck news and next steps in the exploration process at both Valiente and San Martin. Enjoy!