Uranium Energy Corp. (NYSE-American: UEC) — currently trading around US$3.45 per share — has completed the acquisition of Uranium One Americas to create America’s largest uranium mining company.

Uranium One is the world's fourth largest uranium producer and is part of Russia’s State Atomic Energy Corporation, Rosatom.

The newly completed acquisition — which includes, among other assets, seven projects in the Powder River Basin, three of which are fully permitted, and five in the Great Divide Basin, Wyoming — was fully-funded by UEC with existing cash on-hand; UEC will hold approximately US$120 million of cash and liquid assets at closing. 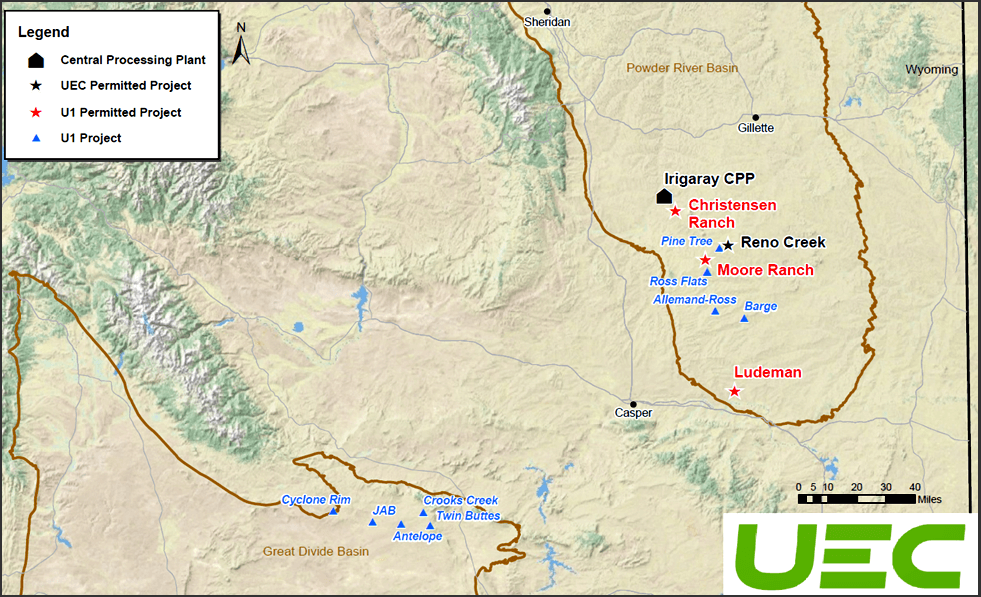 "IWe are very pleased to have closed this highly accretive transaction for UEC. The Acquisition doubles our production capacity in three key categories: total number of permitted U.S. ISR projects, resources, and processing infrastructure. Also, the opportunity to have acquired an advanced asset base of this quality from one of the global leaders in the nuclear energy industry is highly unique. With this Acquisition, UEC's sector leading U.S. ISR production profile increases to 6.5 million pounds U3O8 per year based on permitted and installed capacity of our Wyoming and South Texas hub-and-spoke operations. Combined with our physical uranium holdings of 4.1 million pounds of U.S. warehoused uranium, we now have the unparalleled ability to provide reliable domestic supply to the U.S. Government as well as nuclear utilities while providing our shareholders exposure to the fastest growing, 100% unhedged and pure play uranium business listed on the NYSE American."

"We believe this Acquisition will accelerate the development of domestic uranium production that can supply U.S. origin uranium for a full range of America's uranium requirements. We are proud to be the Company to acquire these significant U1A uranium assets that increase U.S. uranium production capabilities and, by returning them to US ownership, strengthen America's energy and national security."

Next steps for UEC will include the completion of new technical reports on the advanced stage projects in the U1A portfolio with the immediate aim of updating current resources and further developing the company’s Wyoming hub and spoke strategy to capture the significant capital expenditure savings and operating synergies anticipated with its Reno Creek project.

We’re seeing a number of tailwinds and catalysts for higher uranium prices going into 2022. My colleague Gerardo Del Real of Junior Resource Monthly had this to say, “I think we're going to see the uranium price overshoot to the $200 level before it does a 50% retracement to a more sustainable $100 level.”

We’re currently at around $43/lb U3O8, which is well below the price needed to incentivize new production to come online. With nuclear energy being at the crossroads of the electrification-of-everything and global efforts toward decarbonization — there’s a lot of runway ahead for uranium prices and for small-cap uranium equities such as UEC.

Check out additional UEC news, interviews, and much more.