Uranium Junior Mobilizing-the-Drills in the Athabasca

Skyharbour Resources (TSX-V: SYH)(OTC: SYHBF) — currently trading around C$0.40 per share — has announced the commencement of its 2021 exploration and drilling program at the flagship Moore Uranium Project — located in the prolific Athabasca Basin, Saskatchewan, Canada.

The program’s primary focus will be on the high-grade Maverick East Zone, which has returned highlight intercepts of: 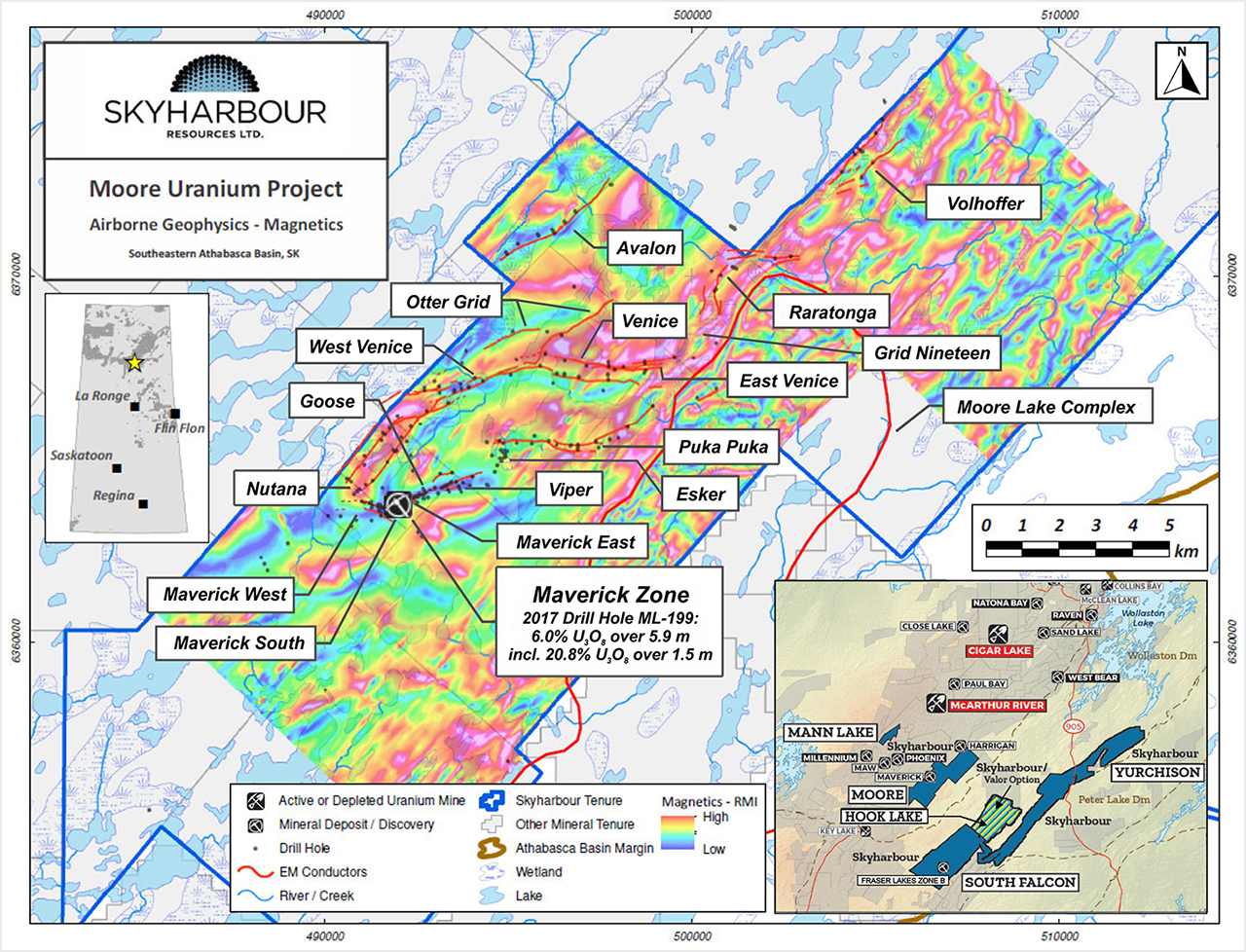 “We have been very pleased with the results to date at the Maverick East Zone, and we will continue to focus on the expansion of this high grade mineralized zone. The uranium mineralization identified during previous drill programs illustrates the strong discovery potential at Moore and recent geophysical programs and new geological modeling have encouraged the Company to develop new regional drill targets in areas such as Grid Nineteen. Outside of our Moore Project, Skyharbour’s partner companies have been advancing some of our other projects. Azincourt is currently conducting a minimum 2,000 metre diamond drilling program at the East Preston Project and at our Hook Lake Project (previously called North Falcon Point), Valor Resources has begun planning for their upcoming exploration programs including airborne geophysics and ground-based exploration in the summer. The uranium market has shown notable signs of recovery with increasing equity valuations and improving sentiment, and this recovery appears to be accelerating.”

As noted above, Skyharbour’s growth model is that of a hybrid prospect generator with the dual focus of partnering on multiple projects in the Athabasca Basin while simultaneously advancing its 100%-owned Moore project.

As the highest-grade depository of uranium on the planet, the Athabasca hosts a number of world-class U3O8 deposits, including:

Skyharbour’s flagship Moore project [acquired from Denison Mines in 2016] is located just 15 km east of Denison’s Wheeler River project and 39 km south of Cameco's McArthur River uranium mine — the world’s largest high-grade uranium deposit.
With substantial portions of the 4.5 km-long Maverick corridor [at Moore] yet to be systematically drill-tested, the Skyharbour team sees robust discovery potential both along strike and at-depth in the underexplored basement rocks.

This renewed focus on basement-hosted mineralization is important as Skyharbour — as well as other companies operating in the Athabasca — is seeing very real potential for high-grade “feeder zones” situated beneath the sandstone cover.

The market has reacted favorably to Skyharbour’s development news over the last several months with SHY shares more than doubling from C$0.15 to well above C$0.35 per share. 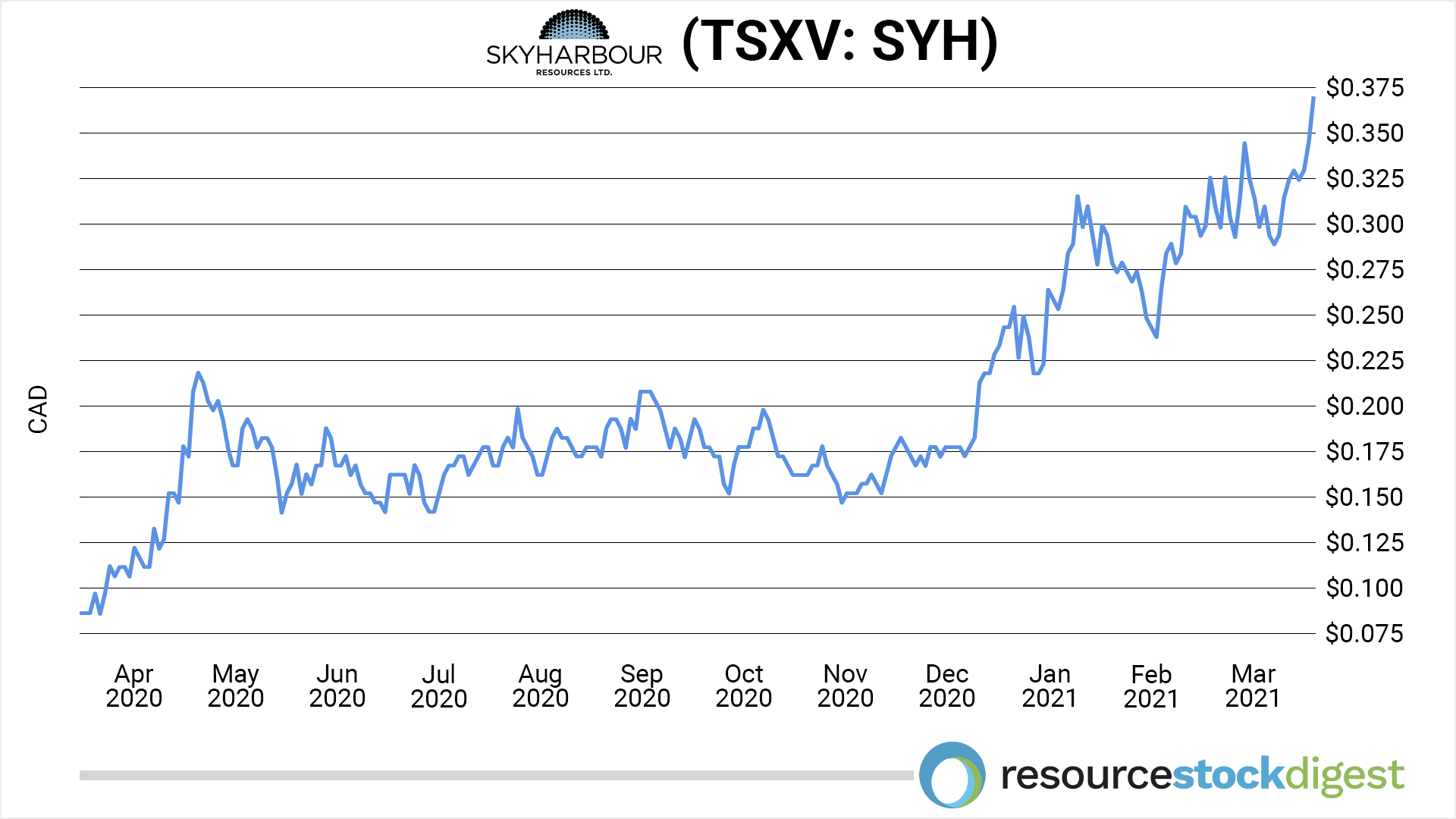 What uranium bulls are awaiting and, frankly, anticipating is for the major utilities to come in and start signing U3O8 contracts at higher prices. Once that happens, the long-awaited rerating in the uranium sector will finally be underway.

Skyharbour Resources — as one of only a handful of North American uranium juniors with multiple drill-ready uranium projects in a Tier-1 jurisdiction — is well positioned for growth in what’s shaping up to be a resurgent uranium bull market.

Our own Gerardo Del Real of Junior Resource Monthly caught up with CEO, Jordan Trimble, for an in-depth discussion on all-things Skyharbour. You can listen to that interview here (or read the transcript).

Also, click here for our most recent report on Skyharbour Resources.