In industry, they’re used to create high-tech magnets used in everything from hard drives and generators to headphones, transducers, and sensors.

And while there’s a need for all of these rare earth metals, the demand for two in particular is set to explode over the next several years.

Neodymium and praseodymium — often referred to as NdPr — are deemed critical for electric vehicles (EVs). According to Adamas Intelligence:

“…upwards of 80% of all EVs projected to use permanent magnet synchronous motors (PMSMs) in the years ahead, the rapid rise in EV sales will fuel a 350% increase in demand for rare earths used in EV traction motors between 2018 and 2025, and a further 127% increase in demand between 2025 and 2030, according to the forecast.”

The electric vehicle market around the world will drive massive demand for these metals.

And governments are legislating that demand.

Over the next two decades, the UK, Ireland, Scotland, France, Canada, India, Sri Lanka, Sweden, Norway, Netherlands, and Slovenia will all either ban internal combustion engine (ICE) sales or mandate the sale of EVs.

As demand for EVs rises, so does demand for these critical metals. And today, China owns most of that supply. At present, around85% of the high-value rare earth metals come from China.

Demand for these metals will be “astronomical” in the 2030s according to Adamas Intelligence:

If the global industry continues to operate myopically — preparing, anticipating and investing only for a three to five-year outlook — the rate of demand growth for magnet rare earths will soon reach “escape velocity”; a point at which annual demand growth becomes so great (i.e. >6,000 tonnes per annum) that it is simply implausible for the already-lagging supply-side to catch up and keep up.

To avoid this fate and seize the enormous opportunity ahead, a flood of investment is imminently needed to develop new sources of supply and downstream value chains to convert that supply into metals, alloys, magnets and other materials used by high-tech industries globally.

That means there’s a huge financial incentive for the North American mining industry to find and develop projects that can feed that looming shortage.

And that’s where Defense Metals Corp. (TSX-V: DEFN)(OTC: DFMTF) has a lead on its competition.

The land package consists of 6 mineral claims covering an area of 17 square kilometers in a mining-friendly district just 80 km northeast of the city of Prince George.

Geologically, the property is situated in the Foreland Belt and within the Rocky Mountain Trench, a major continental geologic feature. The Foreland Belt contains part of a large alkaline igneous province stretching from the Canadian Cordillera to the southwestern United States, which includes several carbonatite and alkaline intrusive complexes hosting the Aley (niobium), Rock Canyon (REE), and Wicheeda (REE) deposits. 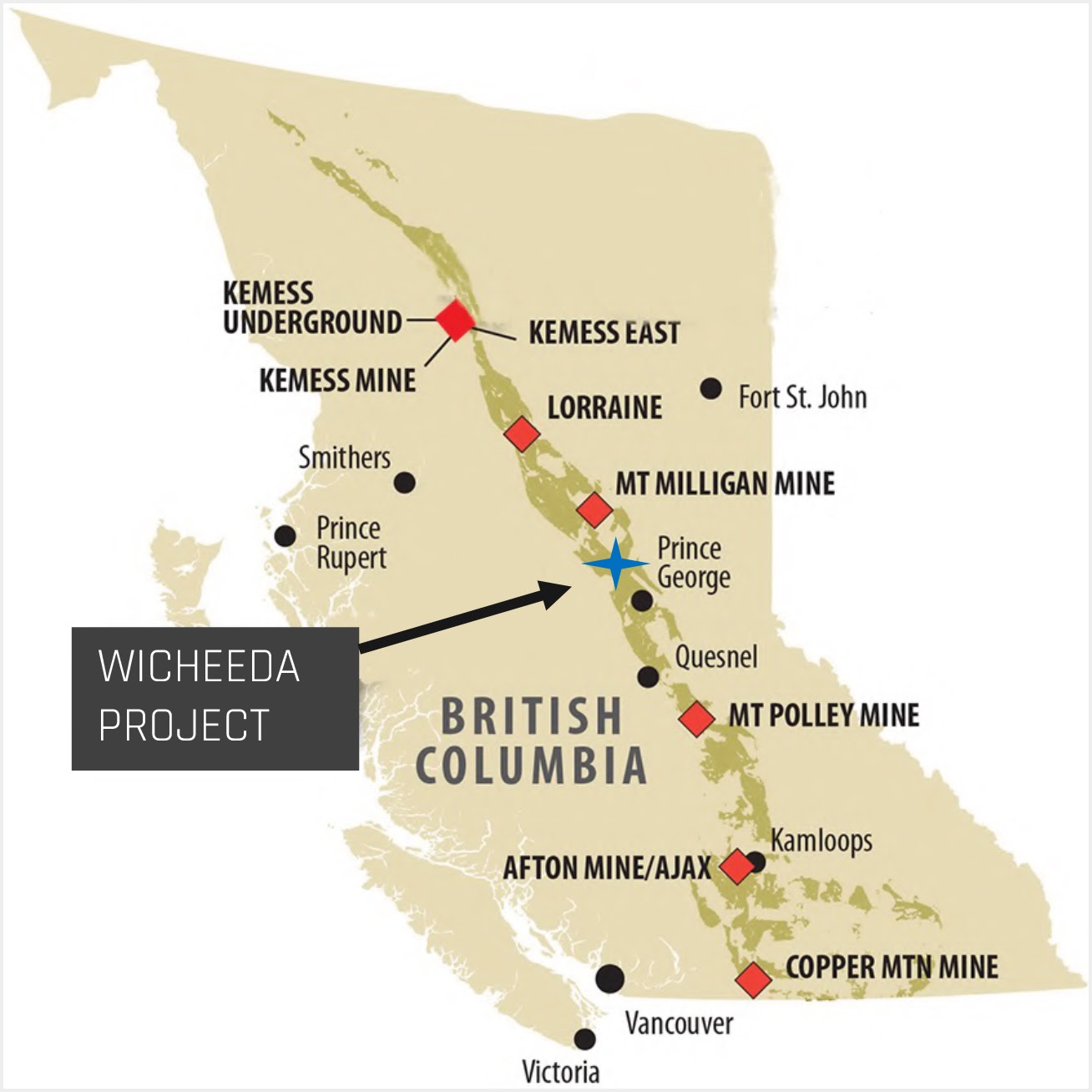 In addition to its favorable geology, the project boasts numerous attractive qualities including easy access by all-weather gravel roads, close proximity to infrastructure such as power transmission lines, the CN railway, and major highways, plus close proximity to an experienced labor force.

A unique advantage of the Wicheeda REE Project is the production of a saleable high-grade flotation-concentrate. The PEA contemplates a 1.8 Mtpa (million tonnes per annum) mill throughput open pit mining operation with 1.75:1 (waste:mill feed) strip ratio over a 19 year mine-life producing an average of 25,423 tonnes REO annually.

A Phase 1 initial pit strip ratio of 0.63:1 (waste:mill feed) would yield rapid access to higher grade surface mineralization in year one and payback of C$440 million initial capital within 5 years.

In terms of drilling, in Q2 2022, the company announced its longest high-grade intercept to date at Wicheeda at an impressive 3.09% TREO over 251 meters.

Following up on that success, a total of 12 diamond drill holes totalling over 3,500 meters have now been completed within the northern and central areas of the PEA pit area with an additional 5 geotechnical holes being drilled now. “Defense Metals is very pleased with the progress of the 2022 infill and exploration drilling to date, and we look forward to gathering important pit slope geotechnical data to support future Wicheeda REE Deposit advanced economic studies.”

There is no question that Defense Metals’ Wicheeda project is one of the highest quality and most advanced light rare earth exploration projects in North America.

For investors interested in staking a position in an emerging commodity scarcity play, rare earth metals are the place to be.

And Defense Metals — with drills turning now — leads the field with its Wicheeda REE Project. Gerardo Del Real: This is Gerardo Del Real with Resource Stock Digest. Joining me today is the president of Defense Metals Corp. — Dr. Luisa Moreno. Luisa, how are you this morning? Dr. Luisa Moreno: I'm very well, Gerardo. Thank you for having me.

Gerardo Del Real: It's great to have you back on. It's been a busy month. You closed out the month of April with the longest high-grade intercept to date [251 meters of 3.09% total rare earth oxide] at the Wicheeda rare earth project. You also just had a news release where you outlined the acid bake process, which yielded improved rare earth element recoveries at the project. And you've engaged SRK Consulting to design a pre-feasibility level geotech drilling program.

A lot going on. Could you give me some context to all the busy stuff that's been going on with Defense Metals?

Dr. Luisa Moreno: Yes, we filed the PEA back in January. And from there on, even before that, we were already thinking about the pre-feasibility. So for this reason, you see the press release related to engaging SRK and the geotechnical drilling. That's going to be an important aspect for the pre-feasibility study.

And so we’re happy to see those large high-grade intersections in the recent drilling. And that should hopefully have an impact on the size of our resource as well as the grade. So that is all positive. What we are then hoping to see, as far as the drilling is concerned, is an impact as well on the mine life once we complete the new resource estimation and then onward to the pre-feasibility study.

Back in December, even before we filed the PEA, we were already looking at ways of improving our metallurgical process. And part of that was to test an alternative process, which is the acid bake process. So previously, and what folks will find in the PEA, is what’s called the gangue-leach caustic-crack process. We decided to investigate the acid bake, which is more widely used, and we are having fantastic results. The acid bake could potentially lead to lower CapEx and OpEx, and, again, improve the economics of the overall project. So it's very exciting.

Gerardo Del Real: It's clear to me from the process and the order of things that you're looking to really optimize the project. I have to ask you, have you had conversations with potential suitors or partners about the project? I mean, there's not a lot of projects that are going to give you an intercept like 251 meters of 3.09% total rare earth oxide, right?

And, again, it's clear to me that you're looking to optimize on all fronts; the recoveries, the size and potential scale here. How are those conversations going, if they're happening, Luisa?

Dr. Luisa Moreno: They are definitely happening; we’re getting calls. And as you know, rare earths are critical, and they are obviously critical for defense applications. They are used in the medical field and also in green technology.

The application in electric vehicles is not in the lithium ion batteries but in the electric motors and other components. And so all of that has led to different groups — some traders, some users — to really approach us and try to understand what stage we’re at and when would be the right time to engage and how much we can really supply to them.

And for us, what we're trying to do is bring this project to production as soon as we can. But of course, we want to derisk the project as much as possible… and so it has to be well paced.

Gerardo Del Real: Well paced… I like how you put that. What comes next, Luisa?

Dr. Luisa Moreno: Well, there's a lot going on. We’ll continue disclosing the results of the acid bake. As indicated, we want to be able to produce a product that’s sellable and able to be shared with end users. So we’ll be able to do that once we build a pilot plant. All of these tests will ultimately lead to us building the pilot plant by Q3 or Q4. By the end of the year, we should have more results from the pilot plant.

Meanwhile, we are going to be drilling. We have another 5,000 meters of drilling, and we’ll be putting results out on that. We’re looking forward to potentially continuing the expansion of the resource through a continuation of the high grades we’re currently seeing. We do not want to be too distracted where we’re putting all our resources toward preparing a second or updated resource. So we’ll have to mitigate our time and the benefits of that. But there is the possibility of us putting out an updated resource after the second drill campaign.

Gerardo Del Real: Pun intended… it sounds like a critical second half of the year! I'm looking forward to catching up again. I'm so thankful that you made some time for me this morning to catch up on a lot of exciting stuff in the works. Thank you again, Luisa.

Dr. Luisa Moreno: My pleasure… thank you for having me on, Gerardo.

The recent Fortress and MP Materials merger is a clear indicator that this is likely a trend that will accelerate. That merger is going to prove instrumental in providing extraction facilities in North America.

Defense Metals Corp. (TSX-V: DEFN)(OTC: DFMTF) is aiming to be the first public company other than MP Materials to have a rare earth hydrometallurgical pilot plant.

And the valuations aren’t even close. For tiny Defense Metals to be valued anywhere close to MP Materials, it would need to rise nearly 150X in market value.

It’s still early days of course, and Defense Metals is nowhere near as advanced as MP Materials, which, obviously, makes DEFN a higher risk play.

Yet, the company is second out of the gate… and there’s a lot of potential upside at hand for investors willing to take an early look.

For interested speculators, now’s the time to get to know Defense Metals as exploration activities, including geotechnical drilling, heat up across the company’s flagship Wicheeda Rare Earth Element (REE) Project in mining-friendly British Columbia, Canada.

A great place to start is the company’s corporate website where you can sign-up to receive updates directly from the company.

And click here for more… including our exclusive interviews with upper management.