Surge Copper Corp. (TSX-V: SURG)(OTC: SRGXF) — currently trading around C$0.45 per share — has announced the consolidation of the Bergette Copper Prospect area located in the Huckleberry Mining District of British Columbia, Canada, with the acquisition of mineral claims in the eastern portion of its Berg property and the southern portion of its flagship Ootsa property.

An updated resource estimate for the Berg project, wherein the company is earning-in 70% from Centerra Gold (TSX: CG), was announced in March of this year. The 70% earn-in requires Surge to spend a total of C$8 million on the project over a five-year period.

"This updated resource represents a moment in time snapshot of the Berg deposit based on the significant investment and high-quality work performed by prior operators, updated for today's commodity pricing and cost benchmarking environments. For Surge, it serves as a baseline prior to our maiden work program under our operatorship, and will guide our investment programs to deliver value in key focus areas. More generally, this resource estimate underscores the strategic significance of our acquisition and the district scale potential we see in our assets. Recent corporate transactions have demonstrated the strategic value and significance of porphyry deposits in British Columbia with a similar overall size and grade tenor to Berg. Combined with our Ootsa property, Surge controls four advanced porphyry deposits with measured and indicated resources totalling 834 million tonnes in an attractive jurisdiction with excellent infrastructure."

And speaking of infrastructure, the Ootsa-Berg project area is located within the established Huckleberry Mining District of central British Columbia which boasts advanced regional infrastructure including roads, grid power, water, and multiple ports.

The district also offers the distinct advantage of being amenable to year-round drilling.

In March, Surge Copper announced the completion of a 20,000-meter, 27-hole winter 2021 drill program at the flagship Ootsa property.

Highlights from that program include step-out hole S21-228, which intersected 585 meters grading 0.57% CuEq, resulting in a significant expansion of the West Seel deposit. 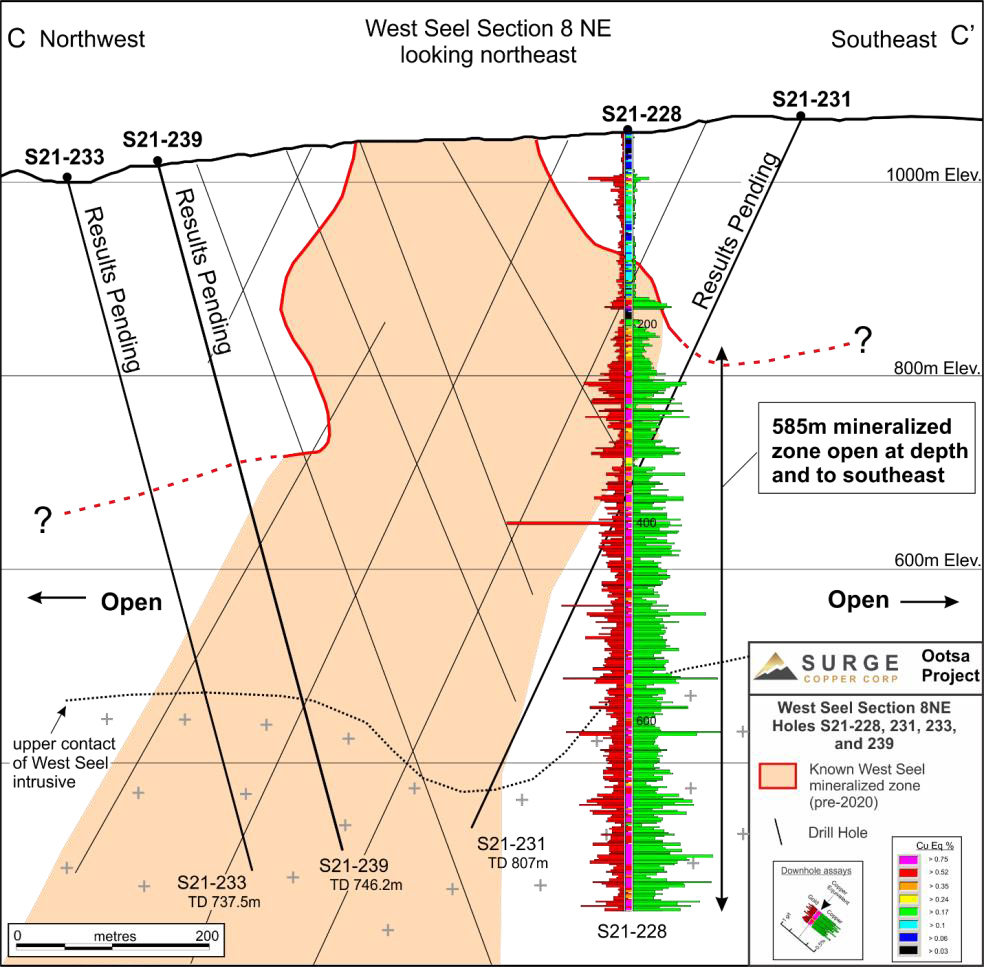 Of the 27 holes completed, 11 have been received and released with the remaining 16 holes currently at the lab awaiting assay results. Drilling is scheduled to resume in late-May, early-June.


Copper on the Rise!

With copper soaring, the timing could not be any better for advancing a district scale copper resource in a Tier-1 mining jurisdiction such as British Columbia.

With President Biden’s $2 trillion infrastructure plan now in the works — coupled with the electrification of everything and the global EV boom — copper demand is looking very, very robust going forward.

As a result, the copper price has been on an absolute tear over the last 12 months — rising from $2.20 per pound to 8-year highs above $4/lb. 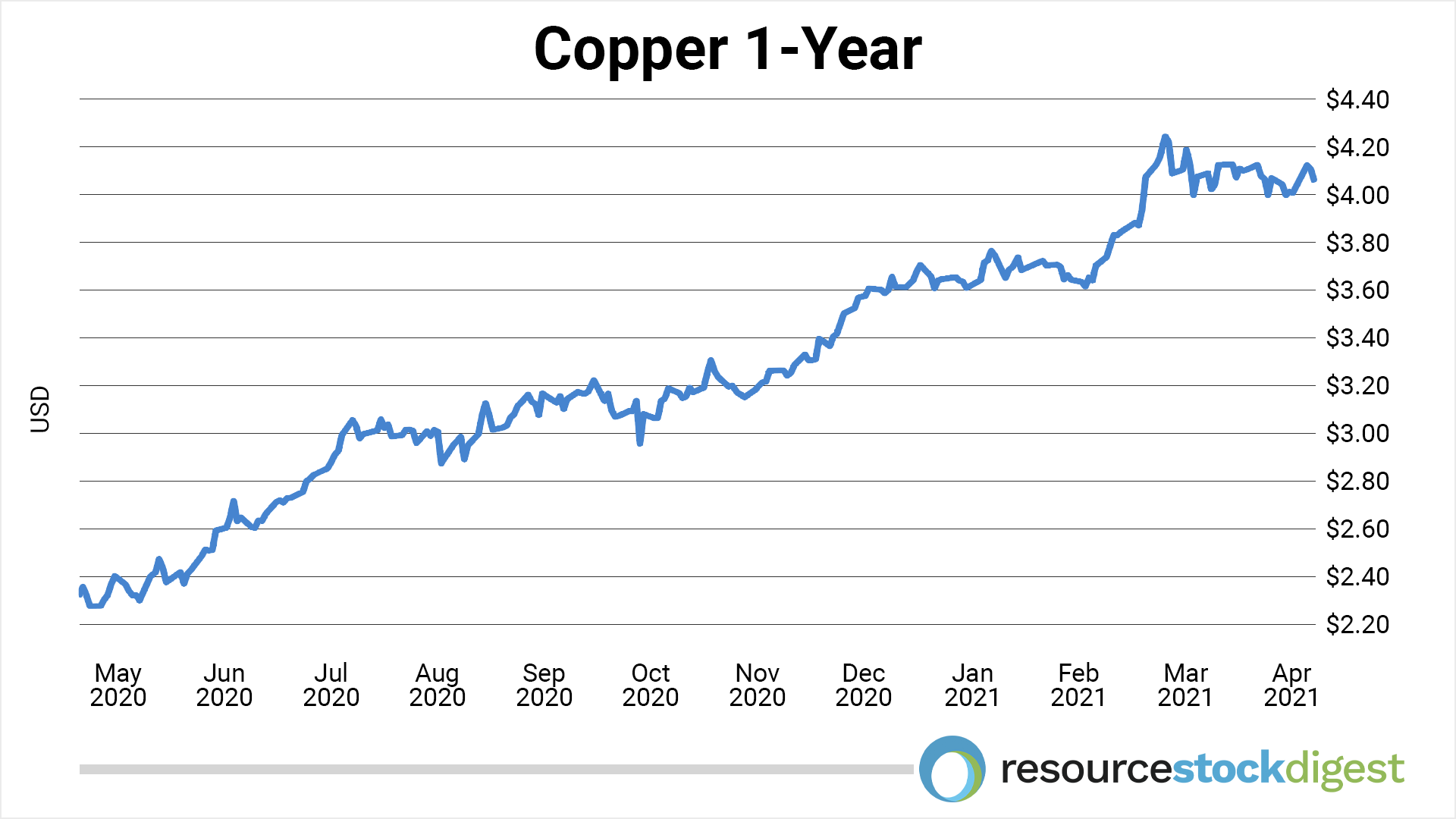 It’s important to note also that copper mines take a very long time to build. Even from the time a board of directors gives the go-ahead to build a project — you’re still looking at upwards of 7 to 10 years before the start of production.

Due to its high electrical and thermal conductivity, copper is poised to play an ever increasing role in the green energy revolution. As communities build new windmills, solar farms, and industrial-scale batteries, the world is building a supply-demand imbalance in copper.

According to ABB Velocity Suite research, the US installed 3.5 gigawatts of new wind farms in the first half of 2020 and has another 21 gigawatts under construction. That works out to more than 95,000 tonnes of copper.

Bloomberg New Energy Finance projects that by 2040, 58% of all global vehicle sales will be electric. That’s over 55 million EVs being sold annually — a nearly 20-fold increase from the 3 million being sold today. And while conventional cars average around 20 to 50 pounds of copper, EVs and hybrids actually require much more — upward of 85 to 180 pounds of copper per vehicle.

So yes, the timing appears right for Surge Copper!

The company’s contiguous Ootsa and Berg projects hold nearly 5 billion pounds [2.1 million tonnes] of M&I copper resources combined in the ground — or around a third more than total US copper consumption from last year.

Plus, you really can’t ask for a better mining jurisdiction than British Columbia, Canada.

Even with its large copper-dominant resource, the Surge team is far from resting on its laurels.

The company, as noted, will be revving up the drills starting in late-May, early-June at Ootsa with a focus on resource expansion at the West Seel deposit which is open in multiple directions. The primary target is a large, deeper pit outside the current resource that holds potential for higher copper grades and a lower strip ratio.

The company will then shift its attention to Berg where the focus will be on infill drilling at some of the known higher grade, near-surface targets.

What’s important to note here are the exceptionally long intercepts of mineralization, which, by their very nature, can oftentimes prove highly-conducive to adding bulk tonnage to a deposit via fewer drill holes.

In addition to the summer drill program, which is being devised now, the company plans to conduct new geophysical surveys over parts of its largely unexplored ~300,000-acre Ootsa-Berg land package with the aim of delineating new exploration targets for future drilling.

Surge Copper is well-structured with 133.2 million shares outstanding [non-fully-diluted] for a current market cap below C$60 million. And the company is well-funded with approximately C$4 million in the treasury.

Our own Gerardo Del Real of Junior Resource Monthly sat down with CEO, Leif Nilsson, for an in-depth discussion on all-things Surge Copper. You can listen in to that conversation here (written transcript is available). Enjoy!

You can also learn more about Surge Copper at their corporate website.